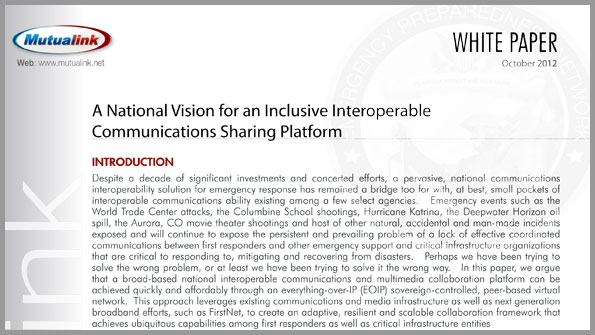 Interoperability solutions provider Mutualink yesterday released a white paper outlining its proposal for a nationwide interoperability architecture that is designed to leverage IP-based intelligence at the edge of the network and provide greater local control than traditional hub-and-spoke architectures.

Such an approach will be more inclusive and more attractive to a variety of critical-infrastructure entities — for instance, transportation authorities, healthcare facilities, stadiums, shopping malls and utilities — that want to be able to communicate reliably and quickly to public safety during times of crisis, according to Mutualink President Colin McWay.

"The first responder will be able to have this great new fast pipe, but what about all the places they have to respond to?" McWay said during an interview with Urgent Communications, referring to the planned 700 MHz LTE network for public safety. "What we're saying is, 'Here's a way that everybody now can participate together, and we've solved some of those kinds of problems that have historically existed.' From our perspective, the big problem is making people be willing to participate on these networks."

And many critical-infrastructure entities are uncomfortable with the traditional hub-and-spoke architecture used in many proposed interoperable networks.

"While this can certainly be a fine technical solution, it does not address some of the key human challenges to attaining a multi-agency interoperable communications environment," Mutualink's white paper states. "Principally, it does not respect the sovereignty of the individual participants' own communications assets because one of the entities is hierarchically superior (hub) to the others (spokes)."

Instead, a better approach would be to establish intelligence at each edge of the network, as Mutualink has done with several different entities in New Jersey and the northern California area.

"It's different from what has existed before. It's a network without silos — it has no geographic boundaries," McWay said. "So, if there's something that's happening in the port of Oakland, it could be relevant to the port of New York/New Jersey. And why shouldn't those entities be able to share their communications assets with each other and with the first responders, as necessary?"

Brian Dolan, director of the emergency department and disaster-preparedness service at the hospital operated by the University of Medicine and Dentistry of New Jersey, said the Mutualink solution has worked effectively for his staff for the past five years. By adopting the interoperability offering, the university staff has been able to communicate quickly and effectively with myriad university, public-safety and critical-infrastructure entities without having to buy a separate expensive radio for each one, he said.

"Rather than spending thousands of dollars on different radio systems for communications, you spend some money on the infrastructure, which is the Mutualink system for communication," Dolan said during an interview with Urgent Communications. "Now, all of a sudden, you have the ability to do that same project at a fraction of the cost."

And the interoperability is not just for voice; data and video can be shared easily over the system, Dolan said.

"If I have to have a conversation with somebody as a group, rather than go into people's individual phones and dial them, I can quickly queue them up on the Mutualink system and essentially have an open conference call," he said. "We can share information. For example, a couple of years ago, we had a device threat, and we were able to share full plans with the police department, camera images and video at the same time."