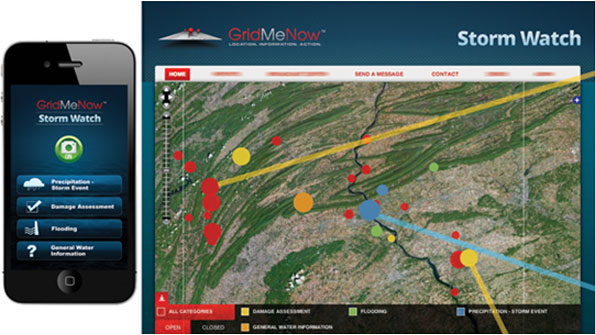 GridMeNow solution lets public-safety personnel share reports and geo-stamped images to enhance situational awareness during and after an incident.

A quickly deployable situational-awareness solution from White Canvas Group helped bolster the efficiency and effectiveness of the Huntingdon County, Pa., response to Superstorm Sandy, according to an emergency-management official.

Called GridMeNow, the White Canvas Group’s smartphone-based solution lets users share reports and images — automatically stamped with the time and location — that provide enhanced awareness of a given situation, which can be used to improve damage-assessment and recovery efforts, said Adam Miller, director the Huntingdon County Emergency Management Agency.

“We’re not as technologically resourced as metropolitan areas, so to gain situational awareness sometimes here is a big challenge,” Miller said during an interview with Urgent Communications. “Allowing folks to be able to snap a picture and send that to us — giving us information that is geo-coded — is just terribly useful.

“When [users] would see something, they would take a picture of it where they were, which would geo-code it on the map for us, send us the information that was relevant, and it would pop up on our screen. It really cut down on a couple of steps for us, and that’s big.

Miller said he first learned of GridMeNow about a year ago and had planned to deploy the solution in Huntingdon County this fall. However, he decided the county should use the solution on the eve of Superstorm Sandy’s landfall.

“Basically, the day before the event came … I said, ‘I believe we can use this and implement this right now,'” Miller said. “So, we pulled the trigger on it at the last minute, and I was shocked how simple it was for me to basically spin up users on it and start making reports from the field to us to start to develop a new level of situational awareness — and, boy, was it a treat.” 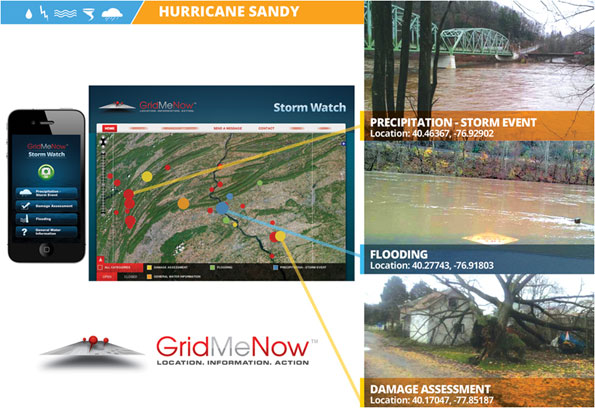 Establishing a trusted-source rollout of the White Canvas Group solution was “very intuitive,” Miller said. After entering a user’s phone number, e-mail and device model into the system, the GridMeNow installation instructions were delivered to the users, who began leveraging the technology quickly, he said.

“It was really easy for me … If you can operate Google Earth, you can operate this,” he said. “This is really a slick, non-hardware installation — this is all virtual. It was easy. It was instantaneous. It was nothing more than me putting in a couple of numbers, hitting ‘send’ and people get hooked up. That’s huge for us, because I don’t have the personnel and the resources to go out and build hardware solutions to solve this problem.”

Huntingdon County was not damaged by the storm as much as other parts of the northeast, but GridMeNow allowed emergency officials to assess problems quickly and is ideal for creating damage-assessment reports that are needed to receive federal aid, Miller said.

“When I want to paint a picture of the type of damage that my community has in developing a statement of impact for the federal government … there is no better way to paint a picture than to have actual imagery,” he said. Normally, it takes a long time to acquire such data, but with the GridMeNow system, the data-acquisition occurs in real time, according to Miller.

“I will be able to show the impact days before we would be able to compile that information for ourselves [using previous methods],” he said.

GridMeNow also proved to be an effective interoperability tool, as a variety of stakeholders — from the National Weather Service to state agencies — were given user access to the system, so that they could track storm damage in real time instead of having to wait hours for status updates, Miller said.

In the future, utility workers and possibly even citizens could be given access to the GridMeNow system, which would result in greater coverage of an event, he said.

“I don’t get excited about much, and I’ve worked with a lot of technology across a broad spectrum over the air. With this one here, the future is very open,” Miller said. “I can see this being an integral part of 911. One day, people will be using their cell phones and texting pictures and video of live incidents to emergency responders as they try to coordinate [resources].

“This is the easiest way to make a two-way communication, in my book. This is the best I’ve seen yet.”