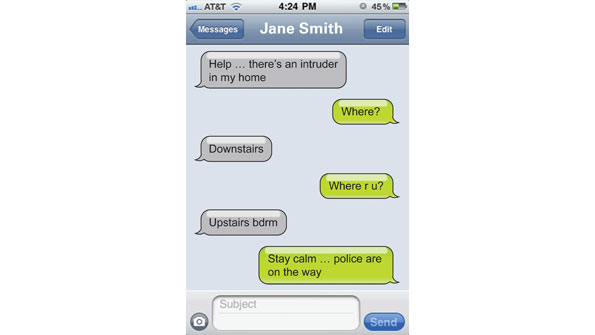 Nationwide carriers agree to support 911 texts by mid-2014, and to implement a "bounce-back" feature by mid-2013 that will alert callers when 911 texting is not an option.

All four nationwide wireless carriers — AT&T, Verizon, Sprint Nextel and T-Mobile USA — yesterday committed to supporting text to 911 in their networks by May 15, 2014, with “major deployments” expected in 2013.

Each of the four carriers signed the agreement with the National Emergency Number Association (NENA) and the Association of Public-Safety Communications Officials (APCO) in a deal that was announced last night.

“Access to 911 must catch up with how consumers communicate in the 21st century — and today, we are one step closer towards that vital goal,” FCC Chairman Julius Genachowski said in a statement. “I am pleased that the nation’s four largest wireless carriers and leading public safety organizations have responded with today’s commitment, which will save lives starting in 2013.”

But the carrier commitment does not mean that text to 911 will become a reality nationwide by 2014. Although several text-to-911 trials are ongoing, most public-safety answering points (PSAPs) are not equipped to handle texts to their 911 systems today, and PSAPs are expected to enable this functionality at different times in the future.

RELATED: A common-sense approach to 911 texting

With this in mind, the carriers committed to providing an automatic-notification method — also known as “bounce back” — to a customer if a 911 texting is not an option from the customer’s location at a given time. Under the agreement, the carriers agreed to enable this functionality by June 30, 2013. 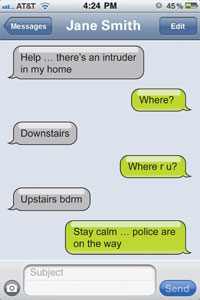 The announcement of the carriers’ commitment to supporting text-to-911 comes in advance of Wednesday’s FCC meeting, which features an agenda item that is focused on accelerating the deployments needed to make text to 911 a reality as soon as possible.

“This is good progress, but our work is not done,” Genachowski said. “Next week, the FCC will consider further actions to advance text-to-911 for all consumers. We will also take additional steps in this area next year, including closely monitoring carriers’ compliance with the commitments they have made today and addressing other aspects of next-generation 911, such as enabling transmission of photos and videos to 911 centers. “We are also working to strengthen the resiliency and reliability of the existing 911 system, where significant deficiencies were revealed by this summer’s derecho.”

NENA CEO Brian Fontes said that representatives of the carriers approached him five weeks ago with the idea of pursuing this agreement upon learning of the FCC’s interest in passing text-to-911 regulations, which NENA supported, if the carriers were willing to commit to deadlines and to providing 911 texts in the manner that PSAPs requested.

All of these components were included in the deal, Fontes said. In addition, by reaching an industry agreement, all parties hope to avoid the delays and costs that were associated with litigation sparked by the FCC’s E-911 regulations, he said.

“I feel good about [the agreement],” Fontes said during an interview with Urgent Communications. “One, it avoids the cost and length of litigation, and — more importantly — the regulatory uncertainty associated with litigation. Two, it provides a date certain when carriers must provision their networks for texting to 911. Three, it contains the bounce-back provisions, and it allows the PSAPs to maintain their choice of options [associated with] texting to 911.”

“With this agreement, text-to-911 capability will be rolled out in an expeditious manner, consistent with public safety answering point (PSAP) readiness and in accordance with industry standards,” Hall said in a statement. “We also support the industry’s commitment to provide a bounce-back message where text-to-9-1-1 is unavailable.”

Fontes said he anticipates that the FCC will recognize the agreement, which will allow the commission to focus its rulemaking efforts on other carriers and software-application developers entering the text-to-911 space. If any of the carriers do not meet their commitments that are in the agreement, the FCC would have the option to impose regulatory requirements on them, Fontes said.