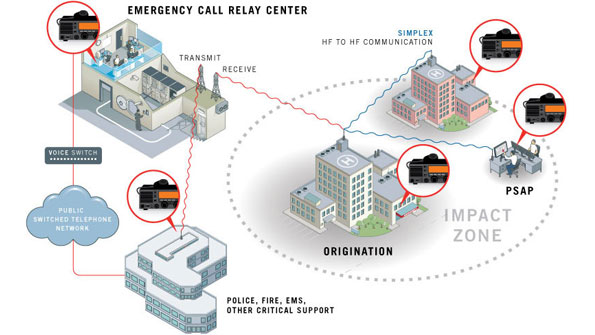 Solution would leverage frequencies that once were reserved for maritime use, but which were freed up for public-safety and critical-infrastructure use by a recent FCC order.

Public-safety and critical-infrastructure entities soon will have a new option for long-distance, last-resort communications when local and even regional infrastructure is unavailable, as 911 solutions provider Intrado today announced a new product that will leverage high-frequency (HF) spectrum from 3 MHz to 30 MHz.

Known as HF 9-1-1, the Intrado offering will operate on HF frequencies that previously were reserved for maritime use but are now available to public-safety agencies and critical-infrastructure organizations under a recent FCC order, according to Stephen Meer, co-founder and chief technology officer for Intrado. Intrado secured an exclusive agreement with maritime radio operator ShipCom for use of the HF frequencies in the U.S.

"We are very, very, very excited about this," Meer said during an interview with Urgent Communications. "When this opportunity came, we immediately said, 'This is a big deal. This is exactly what the U.S. has been needing for a long time' — a viable, Apocalyse-proof solution to back up other levels of communication.

"I think it's completely complementary for what's going on at FirstNet … and other areas of public-safety radio communication. When all of these very capable, feature-laden, spectacularly great systems that we depend on day in and day out [falter because infrastructure is unavailable], this is the backup for those."

HF technology operates on frequencies that have remarkable propagation characteristics, which is why it was the longtime primary method for ship-to-shore communications with personnel on the "high seas," Meer said.

"The beauty of HF is that you need a radio on this end and a radio on the other end, and that's it — there's no intervening infrastructure … and you can talk pretty much to whoever you need to talk to," he said, noting that the the HF device that Intrado envisions will be simple enough that no special training will be necessary to operate it.

Use of the maritime frequencies were expanded to include public safety and critical-infrastructure entities after the Coast Guard used the ShipCom spectrum in the aftermath of Hurricane Katrina, Meer said. In 2010, the FCC approved a waiver that allows public-safety and critical-infrastructure entities to use HF frequencies when other communications options are not available, he said.

"The waiver requires that deference be paid to maritime users," Meer said. "But, since there's virtually no maritime traffic anymore [on HF] … it's very easy to keep the traffic separate.

"There are some significant rules about when it can be used, how it can be used and under what circumstances, but — at the end of the day — the waiver is very broad," Meer said. "It covers anywhere in the U.S. — when one of these critical industries has no other way to communicate and it's an urgent situation, you can use HF."

HF communications will be coordinated through relay stations operated by Intrado, Meer said. Intrado plans to sell subscriptions for use of the service, with the offering expected to be available in 90-120 days, he said.

Meer also emphasized that use of the HF frequencies will be limited to qualifying entities and will be used more for strategic communications in time of need. It will not be designed for use by individuals, he said.

"One of the things that we recognize is that the hams have provided this critical communication of last resort for decades, and I think this is completely complementary with them," Meer said. "I wouldn't want this keyed up as the replacement of those guys, because there's way more communication that needs to happen in these situations than we're going to be able to do with just this network. This is one piece of a coordinated communications-response capability."