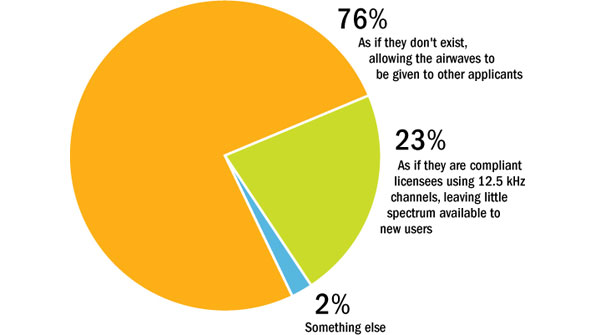 The readers always write — this time on narrowbanding

Prevailing attitude is that the FCC should allow the spectrum of non-compliant licensees to be reallocated — an outcome that is wholly impractical.

The FCC’s deadline to convert land-mobile-radio systems operating below 512 MHz (actually, 470 MHz, thanks to the waiver given to T-Band systems) to 12.5 kHz-wide channels from the traditional 25 kHz-wide channels — a process known as narrowbanding — has come and gone. Now the LMR sector awaits the commission’s guidance as to what should happen next; specifically, how should non-compliant licensees — and there are scads of them — be treated?

There are two basic approaches:

We asked our readers what they thought should happen. Three out of four respondents believed that the former approach was more appropriate. Some respondents provided commentary. These comments generally were of the “screw ’em” variety. 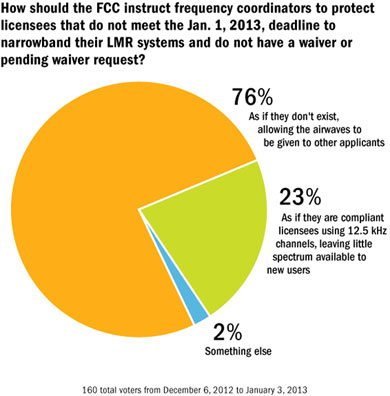 Here are a few examples (See all comments.):

“The original FCC requirement for narrowbanding was issued in 1994. If you have not done so by now, you had no intention of fulfilling the requirement, and your license should be cancelled. If you are found to be operating with an emission mask greater than allowed, a notice of apparent violation should be issued.”

“What sense do rules make, if they will not be enforced? Many agencies have complied with the mandate, many at considerable expense. The FCC has ‘drawn the line’ as the saying goes, and, to have any legitimacy, they must follow through.”

“Licensees who invested significant time and money to bring their current radio systems into compliance or purchased new compliant radio systems should be rewarded with access to spectrum held by licensees who failed to heed FCC warnings regarding the narrowbanding deadline.”

“Most of us have narrowbanded at considerable expense. Screw them! If you are non-compliant, you are illegal.”

“Why should someone who has failed to narrowband his license in the approximately 15 years since the FCC mandated narrowband be given preference over someone who wants a license to operate narrowband now?”

Of these, the one that resonates with me is the second. Rules are meaningless unless they are enforced, and sanctions have little or no impact if they don’t hurt. In a black-and-white world, the FCC would revoke the licenses and cast the scofflaws adrift. But we don’t live in such a world — ours is shaped by many, many shades of gray. Accordingly, treating the non-compliant licensees as if they don’t exist and then reallocating their spectrum to compliant users is wholly impractical.

As UC Editor Donny Jackson reported today, an estimated 20,000 public-safety licensees still have to file narrowbanding applications. It would be one thing to shut down a business/industrial user — the FCC might be able to get away with that — but there is no way that it will shut down a public-safety entity. Can you imagine the outcry if someone’s house burned to the ground because the fire department couldn’t dispatch a crew? Can you imagine the litigation that would follow?

So, the FCC’s only real recourse here, distasteful as it is, is to fine heavily the municipalities whose police, fire and EMS agencies have failed to narrowband. The fines should be incurred daily, so as to provide incentive for expediting the work that already should have been completed. Of course, the FCC has to be consistent in its enforcement, so it will need to treat B/I licensees in the same manner.

Those who incur fines will complain. Too bad. As several readers have pointed out, they have had more than a decade to plan for narrowbanding — so no excuses, and no sympathy.