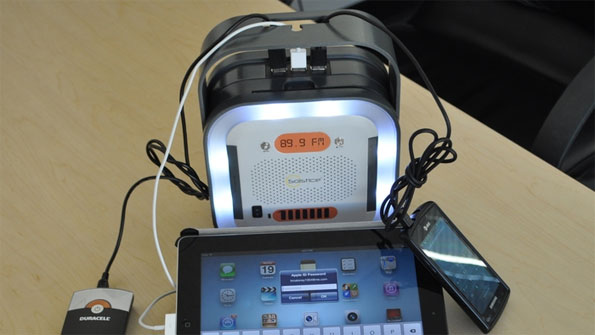 USB device offers the power of more than 100 D-cell batteries; can be used to charge a variety of mobile devices.

With Solstice, a user can charge an iPhone 5 as many as 20 times and an iPad 3 up to 5 times. The device also can power emergency LED lights for 6 hours per night for 12 nights during times when the commercial power grid is unavailable, according to QuantumSphere President Kevin Maloney.

The Solstice package — which includes an emergency digital radio and some LED lights — is expected to retail at $119 ($99 on Kickstarter), with replacement batteries costing $49, he said.

"We've developed a better engine for a better disposable battery, and that engine runs on our sort of gas and oil, if you will," Maloney said during an interview with Urgent Communications. "We took that combination and put it into a nice form factor — 2.2 pounds, or 1 kilogram — that will deliver the energy equivalent to about 115 D-cell batteries.

"That's a lot of energy for a small, 2.2-pound form factor. An equivalent number of D-cell batteries would cost $230, if they were $2 apiece, and they would be about 40 pounds in weight."

Maloney stressed that Solstice should be used only when the commercial power grid is unavailable. The need for individuals to have a backup power source that can be used to recharge communications devices was highlighted during SuperStorm Sandy, said Matt Griffith, senior mechanical engineer for QuantumSphere.

"I have friends who were really hit pretty badly by Sandy," Griffith said during an interview with Urgent Communications. "They were without food, without power and without warmth. It turned out that the Red Cross literally was like three blocks away from them, but they didn't know about it, because they weren't able to keep their devices charged and didn't have an emergency radio to let them know what was going on.

"So, they missed out on a hot meal and blankets to stay warm, so that kind of emergency power and communication I think is pretty important."

One advantage of Solstice is that the power supply is packaged in a manner that allows the batteries to have a shelf life of at least 3 years, Maloney said.

"The cells are sealed in a hermetically sealed, airtight package, so there's a very long shelf life. If they're not opened and are in their original packaging, they can last several years. If you break the seal, the batteries are on, because they are metal-air batteries. When the air touches the zinc metal inside, it starts to oxidize to create the chemical reaction that creates electricity.

"As long as the air does not touch the battery, it has a very long shelf life. And the beauty of that for first responders and other emergency-preparedness responders is that they don't have to constantly monitor and recharge all of their rechargeable batteries."

While Solstice is targeted for consumer use during emergencies, QuantumSphere also offers a larger power supply — the 28-pound Ranger, which costs $499 and provides 3.5 kilowatt hours of power — that has been popular with emergency-response agencies, Maloney said.

"We think the Ranger — the larger unit — should be in the trunk of every first-response vehicle, and it comes with an LED light and two outlets, so you can continue charging radio devices," he said. "I think it's a good backup for when generators are down and the [commercial power is] unavailable."

Ranger units are available immediately, but Solstice will not be available until August, Maloney said. QuantumSphere is accepting orders for Solstice on the Kickstarter website.

"[Kickstarter] is an interesting platform that gives you free access to masses of early adopters that will back projects that address a need," he said. "We think it's a great forum that kind of matches ideas with capital. And, it gives us immediate feedback from the general public whether they like it or not.

"People who order from Kickstarter are sort of kicking off the production, if you will."