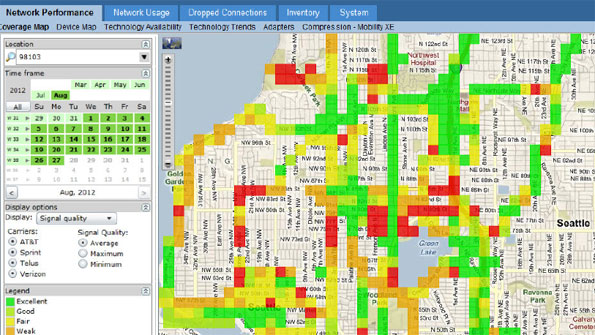 Platform gives enterprises visbility into the coverage and reliability of the commercial wireless networks that they rely on.

Locality is designed to give enterprises visibility into the coverage and performance of commercial wireless carrier networks, which historically have represented a leap of faith for enterprise subscribers, according to Mark Pendolino, senior marketing communications manager for NetMotion Wireless.

“There’s no visibility into these networks, and they’re very critical to operations,” Pendolino said during an interview with Urgent Communications. “People are making large investments into the devices, adapter and applications to support those deployments, and it’s basically just a huge blind spot for organizations that are trying to manage these connections.”

Enterprises can get a picture of the coverage and performance their users are receiving from a particular carrier with Locality, allowing the enterprise to adjust routes or seek improvements from the carrier, Pendolino said. With the release of Locality 1.5, the functionality is available for the first time on Android devices, he said.

“Internally, it’s a huge win for us,” Pendolino said. “We’ve been working on it for awhile, and this is the first time we’ve had support for an [operating system] other than Windows on our products.”

Locality 1.5 also includes new support for Windows 8, Pendolino said. Locality support for Apple operating system devices is expected to be available in the second or third quarter this year, he said.

“Locality opens our customers’ eyes to specific adjustments that will lead to better operational performance,” Bob Hunsberger, president and CEO of NetMotion Wireless said in a statement. “This enhanced visibility helps teams quickly and confidently pinpoint problematic factors today and into the future as their deployments change and grow.”

Currently, NetMotion has 57 clients using 16,000 Locality licenses, Pendolino said. Most licenses belong to users of NetMotion’s Mobility XE mobile VPN solution and are in the government/public-safety sector, but four customers do not use Mobility XE, Pendolino said.

“Locality can work with any VPN,” he said. “It works better with Mobility XE, because they have some integration around some of the reporting tools, but you don’t need Mobility XE to run it—it can work with other VPNs.”