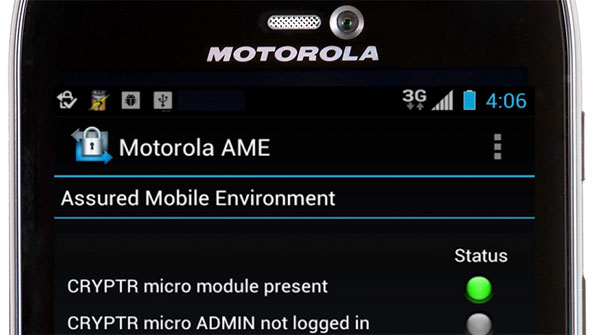 Motorola Solutions recently announced the AME 2000, a secure voice and data communications solution for Android smartphones that is designed to meet the security requirements of federal agencies. 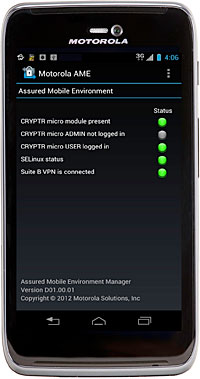 Motorola is introducing the AME 2000 after last year’s unveiling of the AME 1000 as a secure voice solution, according to Gary Schluckbier, Motorola Solutions’ senior director of ASTRO infrastructure product management and leader of the AME 2000 development team.

“The AME 1000 was specifically tasked for voice, whereas the AME 2000 provides secure voice, data, [and] data-at-rest protection, and mobile-device management,” Schluckbier said during an interview with Urgent Communications

“With the AME 1000, we had the uptake that we expected — voice users were very excited and were able to use it. The AME 2000 we expect to appeal to a much broader base of users, so we’re expecting a much broader adoption and interest, and we’ve already seen that interest.”

This combined use of hardware and software make the AME 2000 solution more secure than software-only security solutions, according to Schluckbier.

“In general, the AME 2000 needs to be considered an integrated solution, and there are a couple of good reasons for that,” he said. “One of the biggest threats to commercial mobile devices is that, while you can put all sorts of security software that runs on the device, if you can’t guarantee the integrity of the underlying [operating] system and platform of the device, that security software is completely meaningless, because it can be exploited or attacked.

“The AME 2000 solves that problem by providing a fully integrated, best-of-breed commercial solution that is locked — it’s not somehow unlocked and reflashed. In that case, Motorola Solutions becomes the trusted OEM, in that the platform that comes out of our factory is one that you can guarantee is locked and we can show as secure. If we were to flash upgrade the phones, you couldn’t get that same level of assurance.”

Currently being trialed by the U.S. Department of Defense, the AME 2000 is available in a Motorola Mobility smartphone that uses the Android operating system, although Motorola plans to make it available on other phones and other operating systems in the future, Schluckbier said.