A rugged notebook with a 14-inch display and up to 11 hours of battery life was among the items showcased, as well as several tablet computers, including a rugged convertible tablet/PC. 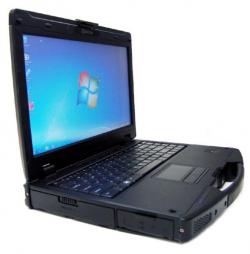 GammaTech’s new SA14 rugged notebook (above) features a 14-inch display and can function for as many as 11 hours with an optional second battery, according to the company. GammaTech also offers an optional touch panel with the SA14 and connectivity to a wide variety of wireless networks, which should be attractive to potential public-safety users, said Paul Kim, GammaTech’s vice president of sales and marketing.

“It’s a really solid, affordable, 14-inch [that is] ruggedized with a handle for public safety,” Kim said during an interview with Urgent Communications. “This is the animal that people have been waiting for.

“We’ve spent a couple of years to design this, and we finally have this model to offer to the public-safety area, because they are one of the heavy-duty users of this type of model.”

GammaTech also showcased its U12Ci rugged convertible tablet/PC, which features a 12.1-inch resistive touch panel, long battery life and security features, according to a company press release. The model is “doing very well in the healthcare market” and may become more popular in the public-safety sector, as the smaller form factor could be attractive to personnel operating in vehicles with little space, Kim said.

“It’s very slim and powerful,” he said. “It has a lot of functionality, and the price point is pretty solid, for that type of budget-constrained market like government now.”

Other GammaTech devices featured at the APCO conference were the TA10 rugged tablet and the CA10 semi-rugged tablet. The TA10 has a 10.4-inch display—with ultra-high screen brightness—and two six-cell battery packs. It provides Bluetooth and Wi-Fi connectivity, as well as an optional GPS function, according to the company. The CA10 is thinner, and has a 10.1-inch display, hot-swappable batteries that provide up to eight hours of power, and a magnetic-stripe reader that makes it ideal for officers issuing citations, Kim said.

Currently, none of the GammaTech devices include connectivity via 700 MHz Band 14—the spectrum that FirstNet will use for its nationwide public-safety broadband network—but the company plans to include this capability in future devices as FirstNet deploys its broadband network, Kim said.

“For public safety, we are really interested in FirstNet,” he said. “As soon as we get some more updates, we’d like to implement [Band 14].”