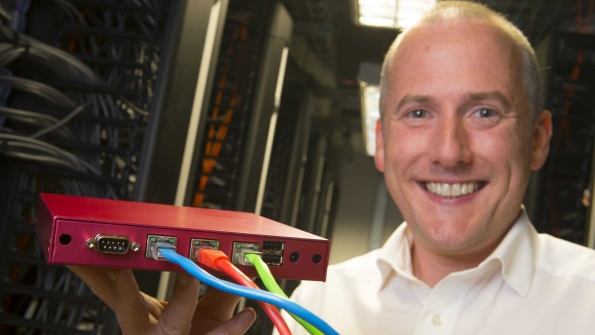 Ireland-based Multipath Networks this month is introducing its bandwidth-aggregation technology--used by first responders and enterprises in Europe--to U.S. consumers and enterprises. The solution is expected to be commercially available early next year.

U.S. consumers and enterprises this month will have the opportunity to pledge their interest in bandwidth-aggregation technology from Ireland-based Multipath Networks that will be available early next year. First responders and enterprises in Europe already use the technology to enhance broadband coverage, reliability and data rates.

Multipath Networks software enables an off-the-shelf Linux router with multiple broadband connections to combine the data throughput from all connections into a single higher-speed connection that also provides a greater coverage area and reliability, according to Multipath CEO Justin Collery.

Multipath Networks’ “bonding” of connectivity typically provides 85-90% of the total possible throughput, which is much more efficient that previously marketed bandwidth-aggregations, Collery said.

“There have been systems in the past, and the way that they do the bonding is that they basically max out your connections, say, every 15 minutes to try to figure out what the capacity is on each of them,” he said. “If you do that on a mobile network, you’re going to use up your data cap in a week.

“That’s not how we work. What we do is, any data that you send, we’re listening to the acknowledgements that are received through the Internet to say that the data has been received. We use those acknowledgements to determine how fast each connection is and when each connection reaches its capacity. So, we’re very frugal — we don’t send any extra data to perform this bonding functionality.”

This approach works with any kind of IP connectivity, Collery said. This includes all forms of terrestrial wired and wireless connections, although the efficiency level drops to 70% when using satellite connections, because of the way that technology handles data acknowledgements, he said. As a result, satellite links typically are used only as a “last-gasp” backup when all other networks are unavailable, Collery said.

With the Multipath Networks bonding solution, users can prioritize which networks are used, based on variables such as cost, latency and data throughput, Collery said. In the U.K., where officials have expressed a desire to migrate from TETRA to LTE technology for first-responder communications, this aggregation approach would enable a smooth transition — and would work similarly in the U.S. when FirstNet is built and first responders want to be able to access data throughput via LMR networks, he said.

“My view is that [U.K. officials] want to get rid of TETRA before 2016,” Collery said. “What they’ll do is end up running parallel systems — they’ll have TETRA, and they’ll also have data systems running side by side. And, when they’ve run that for a year or two — maybe longer —a nd they grow confidence in the data systems, I think they’ll start to get rid of TETRA, and voice will then just become data existing on the data network.

“[In the U.S.], you would have your LMR system and your FirstNet system as your primary carriers. You would set your Verizon or AT&T networks as overflow — so, if you don’t have enough speed [from your primary carriers], you start to use your public networks as well, because you’re going to pay a little bit for that. Then, you’d set satellite as your backup mode; if nothing else works, you use satellite as your last option.”

By accessing multiple networks, users get the benefit of the best connections and coverage available, Collery said. In addition, the approach is inherently secure, he said.

“It’s incredibly secure,” he said. “If I was trying to eavesdrop, I’ve first got to decrypt the VPN. I’ve then got to intercept maybe four different streams of data. Then, once I’ve done that and decrypted each of the four streams of data, I’ve got to try to put them back together in the right order. So, it’s much, much more secure — by far— than anything that’s out there already.”

Multipath Networks started its entry into the U.S. market on Tuesday via indiegogo, a website that lets people pledge their interest in projects that they find appealing, Collery said. The company’s goal is to raise $30,000 and to locate its aggregation servers in areas where it receives at least 50 pledges, he said.

Collery acknowledged that the Multipath Networks indiegogo project is designed primarily for “prosumers” — consumers with professional needs or those simply wanting greater data throughput, but he believes that public-safety and critical-infrastructure entities will find the company’s enterprise-level offerings attractive.

“You can even be in a moving vehicle with a video conference going on, and you could be drifting through areas — one area with a FirstNet connection, another area with an AT&T connection and yet another area with a Verizon connection — and it’s completely transparent to you, because we send the data across all of the networks at the same time; we add them all together,” Collery said.

“So, if one link goes down, you’re not offline; it’s just that your link is a little bit slower. And, when the link comes back again, it just adds back to your speed. It’s really useful for emergency services, command-and-control vehicles and even police vehicles and ambulances.”