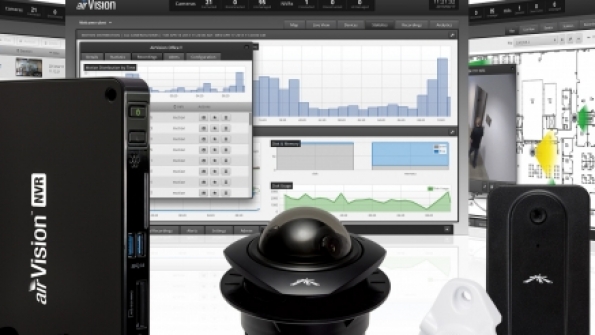 Ubiquiti Networks has upgraded the software and added a new network video recorder to its IP video-surveillance solution, now dubbed airVision2. Launched about a year ago, the platform is targeted to enterprises such as hotels, restaurants, hospitals, schools and retail outlets.

The company decided to move into the enterprise video-surveillance space after watching what transpired with its AirMax solution, according to David Hsieh, chief marketing officer for Ubiquiti Networks, which was founded in 2005.

“We’re probably best known for AirMax, which is used primarily by wireless Internet service providers to establish fixed wireless broadband connectivity,” Hsieh said. “But we discovered that a lot of public-safety agencies and enterprises were using it for wireless video-surveillance backhaul.”

The airVision2 fixed-wireless platform comes complete with airCam cameras, video-management software, and the network video recorder, which features a 500 GB hard drive that can store 1,200 hours of video at 480p resolution, or 400 hours at 720p HD resolution.

The device is about the size of a paperback book and is pre-configured with all necessary software, which makes set-up a breeze, according to Hsieh.

“It’s the next step in making the deployment of video-surveillance technology as easy as possible,” he said. “You can take some cameras and this NVR, plug them in, and be up and running with a full video-surveillance system in a matter of minutes.”

That the platform comes as a complete package is a key feature, according to Hsieh.

“The set-up is super easy—you don’t have to worry about drivers, and mixing and matching [multiple vendors’] equipment,” he said. “Everything comes as a turnkey, integrated system.”

While some organizations may prefer a best-of-breed approach, Ubiquiti has found that its customers tend to prefer an approach that not only is less costly, but also less complicated, Hsieh said.

“There are going to be people that will want to mix and match because of certain requirements that they have, and that’s a perfectly fine approach,” he said. “But it does add substantial complexity to a deployment and substantial cost.

Even though airVision2 is relatively simple to deploy, it could be part of a more complex security effort, because the video-surveillance system can be linked to Ubiquiti’s mFi machine-to-machine communications platform via an application programming interface, Hsieh said. For example, a hospital could deploy motion-detector sensors where pharmaceuticals are stored. When the sensors detect motion, they would trigger the cameras operation to capture who entered the room. Such an approach would be more efficient—the cameras wouldn’t need to run 24/7—and would still serve as a deterrent to theft.

But perhaps the best feature of the airVision2 solution is its “ridiculously affordable price,” Hsieh said, adding that the company can keep prices low because maintains a “very lean infrastructure.” That’s because it employs no internal sales people—all sales are handled by outside distributors.

“We provide megapixel, HD indoor cameras, and each of them are under a hundred dollars,” Hsieh said. “And we include our full-featured software with our hardware. So, you don’t pay any additional license fees or subscription fees. When you buy a camera, you get this great software with it. It’s a highly affordable option.”