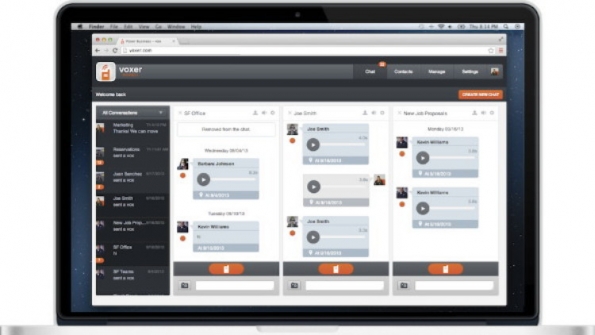 Application enables administrators to monitor multiple conversations between individuals and teams, and join conversations from their desktops using a headset.

But each of these technologies has limitations. Two-way radio and dispatch systems can be expensive to deploy, operate and maintain—on top of that there’s the expense and hassle of licensing those systems. Texts often are delayed or not delivered at all—depending on the coverage and capacity that’s available from the cellular provider—and even when they do arrive at their intended destinations they often are not seen by their recipients until much later. Meanwhile, push-to-talk (PTT) transmissions are missed entirely by the intended recipient, if their phones are turned off. Yet another drawback is that PTT-over-cellular and text platforms only do one thing.

San Francisco-based Voxer thought there was a better way to go about this. The company was formed seven years ago by a former Army Special Forces communications officer named Tom Katis, who experienced first-hand the challenges of coordinating communications between command staff, field personnel, and medical evacuation units in combat situations. Based on this experience, Katis sought to unify live voice communications and text messaging upon his return to civilian life.

The result was a multimedia iPhone application dubbed Voxer that enables users to communicate via both PTT and text messages. If the recipient isn’t able to receive the PTT transmission, the application records it for later playback.

“They can listen to you live, if they’re available to listen, and if they’re not, it gets saved as a message, and they can come back to it later—their phone beeps just as a traditional messaging application would work,” said Irv Remedios, Voxer’s head of product. “So it has this benefit of instant communication, but it also can be saved as a message, and this really is the only app that does that.”

The app was launched in 2011, and by the next year, it was the 13thmost downloaded iPhone app in the U.S, according to the company; Remedios estimates that the number of users is in the “tens of millions.” Company-conducted research indicated that about 20% used Voxer for business purposes.

As a result, the company created Voxer for Business, which was launched about three months ago. The new app adds business-friendly functions, such as full administrative control over employee accounts; a built-in mapping capability that tracks and displays employee transmissions in real-time; and an “extreme notification” function that provides loud, repetitive alerts when they’re needed (see Figure 1). 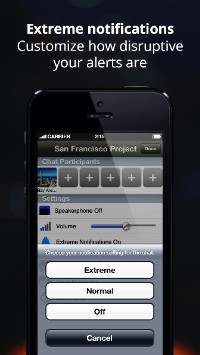 Though Voxer for Business only has been on the market for a short period of time, the company immediately started thinking about the next iteration, according to Remedios. Specifically, it started to think about the enterprises most likely to take advantage of the application, those that didn’t have the wherewithal to leverage a traditional dispatch system but did have large numbers of field workers scattered geographically, such as chain retailers, construction firms, delivery services, commercial trucking firms and taxi/limo services.

Soon after, Voxer for Web was born. The application enables administrators to monitor multiple conversations between individuals and teams. (See Figure 2.) They have access to all voice communications, texts and images transmitted during those conversations. They also are able to join the conversation from their desktops using a headset. 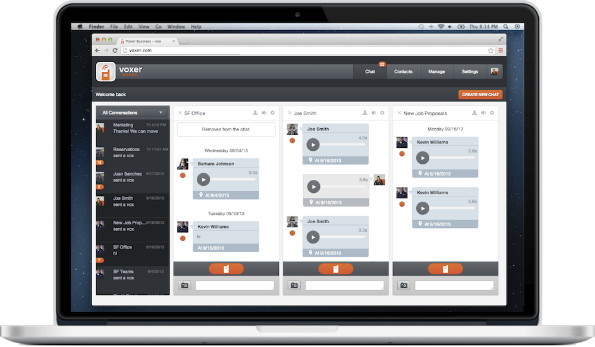 “When we started to talk to our customers who were using the business product, many of them had two typical use cases,” Remedios said. “One was that they had people working in an office that had to communicate with people in the field, or they had a traditional dispatch-type situation where they had to communicate with drivers in the field. Voxer for Web makes that really easy. … It’s a much easier way to manage many conversations and coordinate communications within the company.”

Another benefit of the Voxer platform to businesses is that it is carrier agnostic, Remedios said.

“If you go with a phone-company-type push-to-talk solution, you’re locked into either a specific carrier or a specific set of devices,” he said.