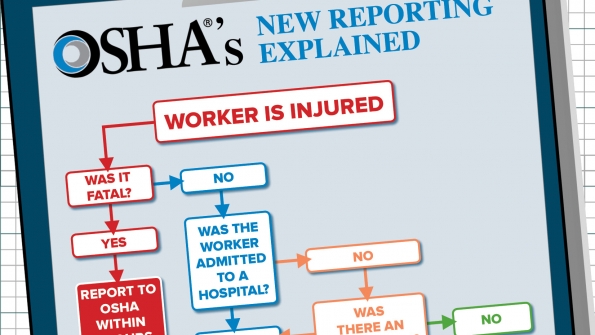 Tower operators and other employers must report any work-related, in-patient hospitalizations to the Occupational Safety and Health Administration (OSHA), according to the agency’s new rules.

Tower operators and other employers now have to report any work-related, in-patient hospitalizations to the Occupational Safety and Health Administration (OSHA), according to the agency’s new rules.

Effective Jan. 1, it’s a significant change. Previously, employers only needed to report an incident if three employees were hospitalized. Now, OSHA wants to know about any hospitalization, as well as any amputations or loss of an eye.

As before, any fatality must be reported within eight hours of the employer learning about the incident. For the other reportable injuries, employers have 24 hours to notify OSHA.

It’s a short window, but it is an appropriate rule that will aid employers in being proactive with their safety and health plans, according to Todd Schlekeway, executive director of the National Association of Tower Erectors (NATE).

“I think the employers will be more vigilant, and hopefully that will incentivize them to continue to assess and be more proactive on potential hazards on a site to avoid a situation where you will have report this and it could be shown publicly,” Schlekeway said in an interview with IWCE’s Urgent Communications.

Tower workers have one of the most dangerous jobs in the country, which has become increasingly evident with an increase in the number of LTE deployments and related infrastructure work. Two years ago, the tower sector had 14 fatalities, making it one of the most tragic years in the industry’s history. Last year, there were 11 fatalities, including multiple deaths that happened when two towers collapsed in West Virginia.

“NATE continues to do everything we can to get that number down to zero,” Schlekeway said.

That increase in fatalities at communication tower sites—in 2012, there was one fatality—has been noticed by OSHA.

“Our industry is a relatively small industry compared to some of the other trades out there, but we’re also under the microscope, as well,” Schlekeway said.

The new reporting requirements, which were announced in the fall, will provide additional data to OSHA and give it the ability to better track hazards in the work place. Much of that data is published online.

“It’s important to remember that these updated reporting requirements are not simply paperwork but have a life-saving purpose: they will help employers and workers prevent future injuries by identifying and eliminating the most serious workplace hazards,” David Michaels, the assistant secretary of labor for OSHA, wrote in a blog post last month.

Schlekeway’s main concern now is ensuring that employers are aware of the change.

“From a reporting standpoint and an employer’s perspective, I think it’s a pretty pragmatic change that shouldn’t be an issue other than just making sure that employers are aware of this new requirement now,” he said.