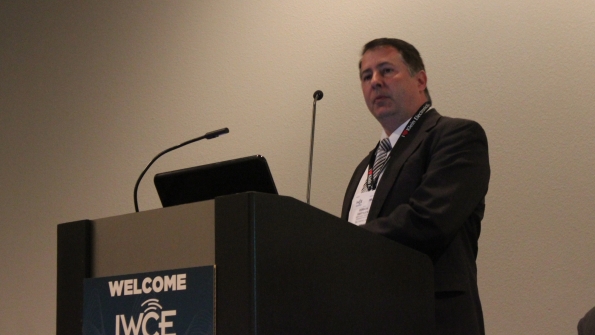 LAS VEGAS–As digital technologies proliferate society, public-safety agencies seek to capitalize by becoming smarter, more efficient and better able to be proactive in their efforts. This is particularly true of Maryland’s Transit Administration (MTA) and the agency’s Intelligent CCTV Program for video surveillance.

Launched in 2007 in 10 stations, the program has since grown to include all platforms for the Metro, Light Rail and MARC rail stations, said Vernon Hartsock, deputy director of engineering and construction for the MTA.

“All video is controlled and monitored at central command of the MTA Police Monitoring Facility, otherwise known as the PMF,” Hartsock said yesterday during a College of Technology session at IWCE 2015. “The PMF contains the latest advances in video-surveillance technology. It enables MTA police to have complete control of all security threats and incidents throughout the MTA’s operational region.”

However, the monitoring program does not consist of countless agents scrutinizing TV screens; instead, the MTA’s intelligent CCTV system is far more advanced and relies on powerful data analytics to increase situational awareness as well as efficiencies, Hartsock said.

“We have something called ‘predefined regions of interest’ that the system can focus on,” he said, noting that the system detects when something seems abnormal or dangerous, and alerts agents of the situation. The system can find and track salient characteristics of individuals and property, including articles of clothing, suspicious packages and out-of-place automobiles.

Additionally, tools within the system let users search through backlogged video intelligently, looking for specific items, individuals, vehicles or even color and lighting characteristics, which greatly improves efficiencies and bolsters the investigative prowess.

“With this system, we have achieved seamless integration of all security peripherals,” said Hartsock. “We’ve established [new] security and privacy standards and a communications backbone throughout the state agencies to ensure interoperability with all present and future security needs.”

Eventually, the agency’s vision is to integrate all transit modes into the CCTV system.

“[Additionally] in the future, we want to have live streaming video in a real-time basis from our rolling fleet as it’s out in the service area,” said Harstock. This capability is being tested in pilot programs, he said.