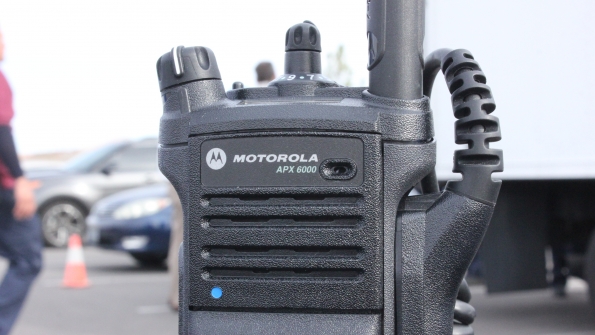 The Las Vegas Metropolitan Police Department partners with Motorola to create a robust, interoperable network to connect officers in the field reliably regardless of location.

The Las Vegas Metropolitan Police Department (LVMPD) yesterday formally announced its crossover to a Motorola Solutions communications network for all officers in the greater metro area and surrounding Clark County. Officers will now be able to communicate clearly and reliably regardless of their situation or location, according to department officials.

“This is absolutely our lifeline,” said LVMPD Sheriff Joseph Lombardo at the afternoon press conference. “Public safety lives, breathes and dies based on their communications.”

In 2010 it was determined that the department’s newly constructed radio system was insufficient after several incidents transpired in which officers were put in danger and harmed due to the unreliable network, Lombardo said. The department faced a difficult decision, but the choice was made to put a new system in place, he said.

The system itself cost $26 million. In addition, LVMPD has signed an 11-year, $31 million lifecycle management and support services agreement for systems and equipment, according to Motorola materials.

Lombardo says he and his officers have no complaints about the new system.

“Every officer I talk to says the new system works flawlessly,” he said. “I’m very proud of that.”

Jack Molloy, Motorola Solutions' vice president of North American sales, said the success in Las Vegas is a reflection of his company’s values.

The key to the network’s success for the department is its versatility and reliability, said Michael Barnbeck, director of the LVMPD’s Radio Systems Bureau.

“This is a P25 Phase 2 system… it’s an open-based standards system, so that we can add interoperability, we can add other jurisdictions on,” as well as use other vendor equipment, if necessary, Barnbeck said.

Motorola’s track record, professionalism and ability to collaborate with his department helped officer’s levels of confidence in the project, Barnbeck said.

“The difference [between the two systems] is like night and day,” he said.