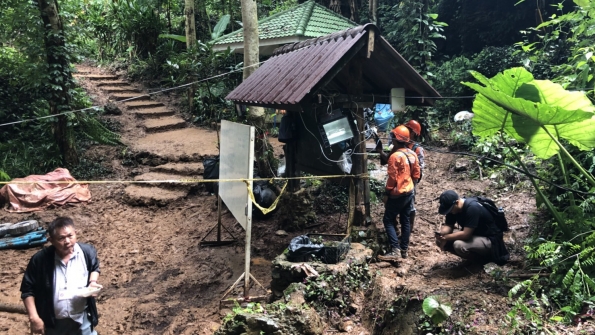 Rescue efforts to save 12 boys and their soccer coach from a flooded Thailand cave were bolstered by Cambium Networks equipment, which was deployed to provide broadband connectivity in the area that was used to monitor key assets, help coordinate rescue efforts and provide communications to interested parties.

Rescue efforts to save 12 boys and their soccer coach from a flooded Thailand cave were bolstered by Cambium Networks equipment, which was deployed to provide broadband connectivity in the area that was used to monitor key assets, help coordinate rescue efforts and provide communications to interested parties.

Two Cambium Networks cnPilot e500 enterprise outdoor network access points were used to provide Wi-Fi connectivity to the rescue area in the Tham Luang cave complex where the 12 boys and their soccer coach were trapped. One access point was placed near the cave entrance to provide direct operational support, while the other access point was placed at the “information tent” where families, media and administrative personnel stayed.

Scott Imhoff, vice president of product management for Cambium Networks, said that Wi-Fi normally is not considered a priority communications tool for emergency response, but the Thai rescue effort highlights the technology’s potential usefulness in such situations.

“When you have one of these events and a large number of people who need to collaborate, obviously, voice is an important element of that [through] your land-mobile-radio systems. But data communication, access to those back-office application and group coordination is really important. On-site Wi-Fi enables that. Here, we had a single Wi-Fi AP that could support up to 512 devices that provided that cloud of emergency-response support.”

Neither access point at the Thai rescue site was stressed by capacity issues, as the cave-entrance area typically had about 50 people and the “information tent” usually had about 200 people, Imhoff said.

In most situations, Cambium Networks’ IP67-rated access points are deployed in remote and connected to the Internet via microwave or satellite links, but the heavy foliage in the area would have made an effective deployment of either technology very difficult, Imhoff said. Fortunately, the local telecom provider was able provide a 2,000-meter-long fiber extension to the rescue area to support the Wi-Fi system operating in the 2.4 GHz and 5 GHz bands, he said.

“When they established search operations at the cave, the e500 was deployed very shortly after the exercise was commencing,” Imhoff said.

With the Wi-Fi system, rescue teams with members from multiple countries could communicate and coordinate efforts, despite potential differences in verbal language and accents, as well as unfamiliarity with procedures, Imhoff said.

“They brought experts in from the UK and Australia, none of which are coordinated into their standard emergency-response protocols,” he said. “It’s not like an interagency support agreement, where you practice and know how these things are going to work, with predetermined protocols, talk groups and things like that.

“They had such a variety and diversity of resources come in to help, none of which had been planned or practiced, that a common communications standard—in this case, Wi-Fi—was an enabler. I’m trying to imagine how they would have done that without it.”

Although Cambium Networks’ equipment is designed primarily to provide communications support to remote areas for non-emergency purposes, Imhoff said the company learns “about once per quarter” of its gear being used by first responders.

“You can set up wireless communications networks quite quickly and provide really robust communication paths for first responders and the population that’s been impacted,” Imhoff said. “Unfortunately, it happens; fortunately, we’re able to respond. But it’s pretty common. If you think about all of the natural disasters that take place around the world, the first thing that’s needed is effective communication.”

Having such Wi-Fi access within the communication “toolkit” is something that first-responder organizations may want to consider, Imhoff said.