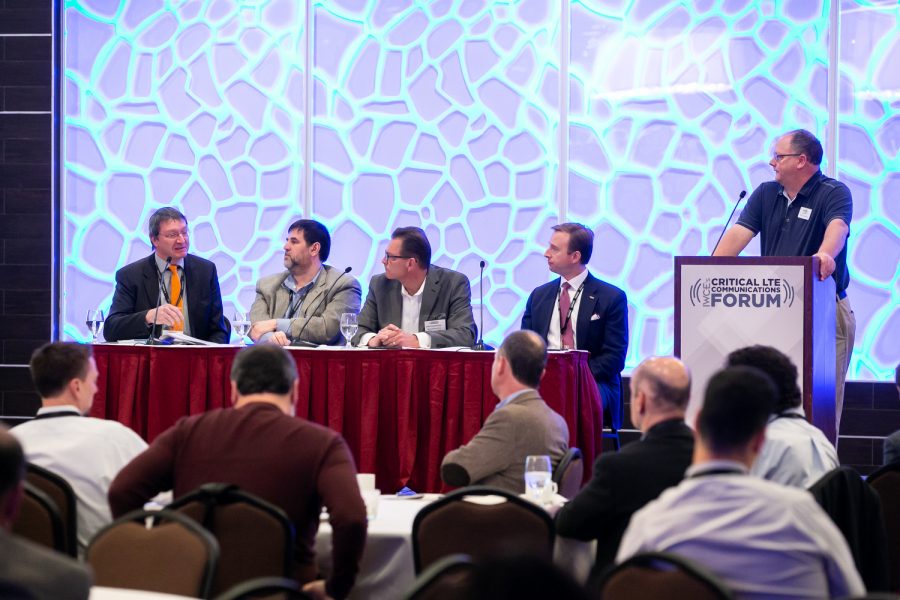 MCPTT expected to evolve during the next several years, speakers say

Mission-critical-push-to-talk (MCPTT) services based on the LTE standard approved by 3GPP are expected to be available to end users next year, but several aspects of the ecosystem need to evolve before such offerings can match the performance of LMR voice, according to panelists at IWCE’s Critical LTE Communications Forum in Chicago.

Although there is considerable industry speculation about when—or if—MCPTT over LTE could replace LMR systems as the primary provider of mission-critical voice communications for first responders, all panelists agreed that MCPTT will be complementary technology to LMR, especially in the short term.

Leonardo Gonzalez, manager of wireless business product management for Verizon Wireless, said that Verizon plans to introduce MCPTT services in 2019 and that he expects them to evolve considerably in the long term. One challenge is that the range associated with proximity services (ProSe)—the MCPTT standard for direct-mode communications—is hampered by the fact that LTE devices typically have much lower transmission power levels than LMR devices and utilize internal antennas, instead of the external antennas on LMR radios.

“Mission-critical PTT is an augmentation technology. It was not intended to fully replace LMR, and it will not, because of the specific constraints that we have in that capability,” Gonzalez said during the session. “With [an LMR] radio, you can have a talkaround channel for miles, right? But I do believe that there are user cases where ProSe has value. If you’re going into a building where coverage might be a little bit spotty or something like that, you can take advantage of ProSe to relay that call to somebody else, so there is still value.

“It might not be used by the forest service in a place where there is no coverage—that we know, which is why we’re talking about deployables and all of these [alternative-networking] technologies. But there are valid user cases for that technology to try to provide that resilience that you’ve got in LMR within the LTE world.”

“They’re saying [PoC] works great, but it’s not the cop or the fireman,” Dombrowski said. “Right now, it’s their non-first responders that actually love it—more the admin, the management, those type of people who are leaving the coverage area and they need communications back to the LMR network.

“But … for a fireman running into a burning building or a policeman having a gun pointed at him, they’re not using an over-the-top [PoC solution] or these types of applications. That’s really the discussion—when are you going to get to a level that they’re going to grab that device and [say that they are] putting my life [on the line with it]?”

Reg Jones, Samsung’s direct of public-sector sales and solutions, said that Samsung has deployed public-safety LTE for first-responder use during the Winter Olympics in South Korea. In addition, he said that Samsung has addressed an oft-cited problem—most LTE chipsets today do not support ProSe.

“We have [ProSe functionality in Samsung-made chipsets],” Jones said. “It is in devices.”

When asked about the performance of ProSe, Jones declined to answer, noting that Samsung has not released the results of lab tests and field trials to date.

As for devices, Samsung has developed devices with key mission-critical characteristics that that not been introduced yet in the United States, Jones said.

“If you look at the [LTE consumer] devices that we have, they are missing some absolutely necessary hardware features on the outside,” he said. “You need a large push-to-talk button. It can’t be a flimsy button that’s hidden, so that it looks sleek on the device, so that maybe you don’t notice it. You need to notice it; it needs to be obvious. The SOS button must be red; it must be obvious. So, there are design components that also have to take place ergonomically on the outside of the device.

“At Samsung, when we look at the device, we look at everything from the chip layer—the silicon—all the way up to the hardware keys that you would use to convey a message—a push-to-talk key, an SOS key. If you look at the two devices that we deployed in South Korea and the United Kingdom, you’ll notice some of these common features.”

The MCPTT standard includes stringent standards, including low latency and the need for high quality-of-service (QoS) levels. Given this, most panelists said that they believe only carrier-integrated solutions—as opposed to over-the-top push-to-talk applications—will be able to comply with all aspects of MCPTT.

“Hands down, if we want true public-safety-grade, LMR-grade push to talk, [it has to be] carrier-integrated,” Dombrowski said. “Over-the-top—in its simplest form, it’s basically a data application.

“When you go carrier-integrated, you get that quality of service, priority and preemption, because the software is in the [LTE network] core of the carrier.”

Harald Ludwig, chairman of the TCCA Technical Forum, disagreed, noting that MCPTT solutions could be provided in an MVNO scenario, if the carrier is willing to enable access to key aspects of its network.

“You still need a network, of course, and you need a mission-critical network,” Ludwig said. “There are different options; it’s not either carrier-integrated or over-the-top. You can open up [other business models], if you use standards-based interfaces.”

Ludwig said he is concerned that vendors will make unfounded claims about their push-to-talk capabilities, because there are no testing solutions to certify whether a product meets the MCPTT standard.

“At the moment, everyone can claim to have an MCPTT-compliant solution. Everyone can say, ‘I have an MCPTT standard-based solution.’ But—at the moment—there’s not really a good way to prove this to the community. The biggest issue is to get test-equipment manufacturers interested in implementing test scripts implemented on their machine, so that test houses can really test MCPTT.”

Ludwig cited successful interoperability testing of MCPTT solutions from different vendors at the MCPTT plugtests event in June at College Station, Texas. Gonzalez reiterated Verizon’s desire to have its public-safety-communications offering that leveraged a virtual core be fully interoperable with the FirstNet LTE core, including reciprocal recognition of prioritized and preemptive traffic across the networks.

“We believe that interoperability is a key component,” he said. “We have approached the FirstNet team several times to talk about that and to make sure that we bring interoperability, which we already have on the commercial side—you can call AT&T numbers, send data and messages or anything.”

Dombrowski said that he believes all aspects of the MCPTT ecosystem—devices, software and LTE networks—need to improve before first responders will consider trusting the technology to the exclusion of LMR. However, he does believe that MCPTT will have a role in first-responder communications in the short term.

“This [MCPTT] becomes your backup push to talk,” Dombrowski said. “We look at it as, short term—maybe long term—the LMR push to talk is going to be your lifeline. That’s your voice … network for mission-critical push to talk. The LTE side of it is your data—your big data enabling technology and device—and it acts as a backup push-to-talk application, if you leave the coverage area for LMR or LMR push to talk is not available.

“Down the road, when we get the ergonomic right the device [supporting the user] being eyes-forward for voice and big screen/big data for applications … without a doubt, we’re looking at that. But it’s more of a collaboration, a complementary relationship between the two.”