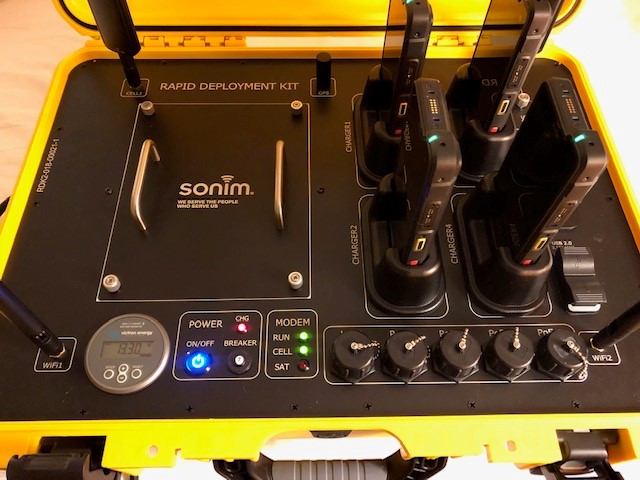 Greater communications flexibility soon will be within the grasp of some public-safety agencies, as Sonim Technologies started shipping its Rapid Deployment Kit (RDK-2) with a FirstNet Ready Cradlepoint router and announced plans to further integrate satellite and LMR capabilities into the carry-case package later this year.

Bob Escalle, Sonim Technologies’ vice president for public-safety market segments, said the RDK-2 provides deployable LTE and Wi-Fi coverage in a package that is small enough to be carried to locations where a vehicular deployable is not practical.

“It extends the range [of LTE by extending an access-point bubble,” Escalle said during an interview with IWCE’s Urgent Communications. “Think of it as a portable Wi-Fi hotspot that you bring with you that has router functionality and a PoE [power-over-Ethernet] switch, with the ability to have a satellite connection for quick failover.”

Perhaps most importantly, the RDK-2 is designed to be deployed quickly at an incident scene by first responders, without any need for extensive special training, Escalle said.

“You don’t need to be an engineer,” he said. “You pull it out. You flip up the antennas, because the antennas are foldable—the Wi-Fi pair and the cellular pair. You hit the power button, and you wait for the green lights to come on … and that’s it.

“To connect your devices, there’s a little sticker that has the access-point name and the password. People can come up to it, and you can connect other devices. It comes with four Sonim XP8s that are already pre-loaded and pre-configured, so all you have to do is pull them out of the chargers and start using them.”

Even devices that are not designed to operate on FirstNet can benefit from an RDK deployment, Escalle said. By connecting to the RDK via a Wi-Fi connection in the 2.4 GHz or 5 GHz band, non-FirstNet users at the site can enjoy a broadband connection—with the priority and preemption associated with FirstNet RDK, he said.

Developed last year in cooperation with AT&T for FirstNet, a prototype of the package was exhibited last August at the APCO 2018 event as an Emergency Drop Kit. Escalle said the name was changed to Rapid Deployable Kit because the solution can be used in many potential use cases that are outside of an emergency scenario.

Each of the RDK-2 units being shipped today is contained in a 25-pound, rugged carrying case with four Sonim XP8 ruggedized smartphones, smartphone charging slots, power-over-Ethernet (PoE) and other ports needed to support interoperable communications and satellite backhaul. Most notably, the RDK-2 includes the new Cradlepoint COR IBR900-1200M FirstNet Ready router, which greatly simplifies the connectivity compared to the prototype that was exhibited last year.

“Whenever and wherever trouble strikes, the Rapid Deployment Kit provides first responders with an instantly deployable communication hub that they can rely on,” Todd Krautkremer, chief marketing officer at Cradlepoint, said in a prepared statement provided to IWCE’s Urgent Communications.

“What helps make the kit simple to deploy and reliable to use is the embedded Cradlepoint FirstNet Ready router, which provides a Wi-Fi bubble to connect mission-critical computers and other devices at the scene to a FirstNet, commercia- cellular or satellite network, based on coverage and signal strength. The last thing responder teams need to worry about in a crisis is the communications network—it needs to just work.”

Escalle said the RDK-2 capabilities in the rugged case—priced at less than $10,000 retail—require some sort of connection to the LTE core or some other IP connection. If no such connection is available on site, the RDK-2 can use an Inmarsat satellite link via a BGAN Explorer 710 terminal to provide the necessary backhaul.

Adding to the potential flexibility of the RDK-2 is that units can communicate with each other, so they can be deployed in a mesh or daisy-chain configuration—a capability that can be used to extend coverage of the LTE network, Escalle said.

“You can daisy chain,” he said. “Like any mesh network, you can only daisy chain so many times before you lose data throughput—I think at three or four [hops], you’re pretty much at a point where it’s not worth daisy-chaining anymore.”

Those seeing the RDK-2 for the first time might be tempted to dismiss it as “just an access point in a box,” but it also includes practical features that are designed to support the overall public-safety mission, Escalle said.

“It’s important to have the power-over-Ethernet switch, because this switch is not only a LAN switch for the different ports, but it also has the injector voltage to power things like IP cameras, IP phones—anything that doesn’t require its own power supply can be powered over this RDK,” Escalle said.

“So, if I get to a scene and want to pop up two or three IP cameras, I can do it, and they’re all powered through the power-over-Ethernet switch, and I can start streaming IP video immediately. I don’t have to worry about finding an AC outlet. I just take the camera, plug my Ethernet cable into the PoE port, and now it’s powered, and I’m also transmitting the data.”

Sonim Technologies plans to continue development on the RDK, Escalle said. Future options that could be available in the middle of the year include an embedded satellite transceiver and a two-port LMR interoperability gateway, as well the potential inclusion of Sonim LMR Enabled Detachable (SLED), an accessory that is designed to transform a Sonim LTE device into one that also can communicate as an LMR portable, when needed.