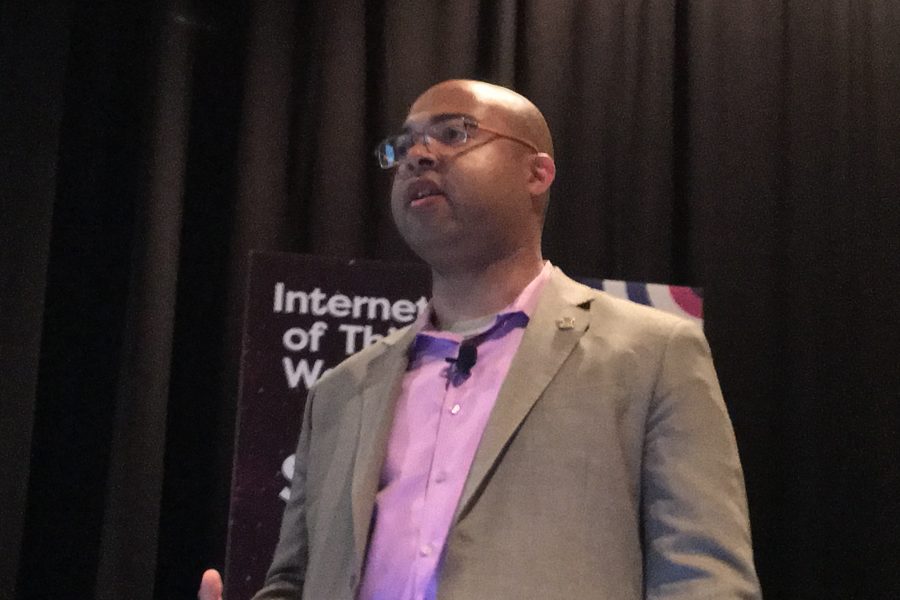 Smart streetlights equipped with cameras and microphones help the city of San Diego better understand traffic patterns throughout the city, but the Internet of Things (IoT) infrastructure also has proven useful to law enforcement, preventing a wrongful prosecution a capital offense, according to a city official.

Much of the promise of smart-cities and IoT initiatives has been focused on visions about “flying cars” and other long-term technologies, but San Diego is directing its efforts toward providing basic services without a lot paperwork or delays, according to Erik Caldwell, deputy chief operating officer for the city of San Diego’ smart and sustainable communities branch.

“At the end of the day, San Diego provides a bunch of mundane services, as well—we pump water, we police the streets, we pave roads,” Caldwell said last week during a session at the IoT World event in Santa Clara, Calif. “One day, I will have my flying car. But, in the interim, I’m trying to fix long lines and poor service reputations that government agencies have—San Diego included.

“This is what my smart city looks like today—those small changes that were made to those mundane functions of government, making them a little bit more palatable. It’s what’s changing the world and allowing us to take things like paving streets, pumping water and putting out fires, and to do it just a little bit better.”

That requires city officials to reconsider the manner in which services are provided, Caldwell said. When citizens are accustomed to placing an order on Amazon and having the product arrive at their doorstep within 24 hours, the traditional city process—filling out a form, driving it downtown, potentially waiting in line to submit it, and then hoping to get a response days later—does not meet expectations, he said.

Given this reality, cities should consider revamping the way they interact with citizens, Caldwell said.

“The principle means of communication for most things in our lives is the smartphone—it’s not paper, and it’s not even e-mail anymore, in terms of talking with your service providers,” Caldwell said. “For cities, having people e-mail in or call a central location to report a pothole isn’t convenient; it’s not the way that people want to communicate.

“So, creating an application that allows somebody to hit ‘Report Pothole,’ snap a picture and your latitude and longitude—as well as any other information that you want to provide—is provided in real time to any road crews that are working on potholes on that particular day. And, you get real-time feedback, as it relates to what’s going on with that particular problem, when it’s going to be addressed, that somebody’s already reported it, and when it’s finally filled.”

San Diego is in the process of implementing an intelligent-streetlight network, which is “the largest deployment of IoT in an urban environment in North America,” Caldwell said.

“More than 4,200 nodes are being deployed in the city of San Diego that have cameras, microphones and other sensor, principally designed to help us understand how people are moving through the urban environment,” he said.

Information from these streetlight nodes are being complemented by telematics on city vehicles to give officials regularly updated information about the condition of roads and other traffic insights, according to Caldwell.

“Our trash trucks drive every street in the city of San Diego once per week—that’s great information, if you are deploying sensors,” Caldwell said. “We can get near-real-time information about road conditions or how vehicles are interacting in the urban environment—which intersections are more challenging or are creating hard-braking events. So, we’re taking that information and pooling it [with data from other sources, such as the streetlight nodes].”

While the streetlight-node project was initiated to provide traffic data, the cameras also have proven to be helpful to public safety in high-profile cases, according to Caldwell. The most notable of these occurred about a year ago, when a fight that began in a bar in San Diego’s Gaslamp District continued on the street, ending with one participant fatally shooting the other.

Caldwell said the initial investigation was relatively straightforward, with dozens of eyewitnesses identifying the person who pulled the trigger of the gun—stories that were confirmed by video from local restaurants in the area. A 20-year-old male was arrested and charged with capital murder.

“A few days later, the police department came to the sustainability department and said, ‘We’re gathering as much video as we can. We understand that you have this intelligent-streetlight system, … can we take a look at your video footage, just to add to the collection?’” Caldwell said, noting that this was only the second or third time the police has sought video from the streetlight system.

“We turned over the video footage. We save it for five days and then write over it, so they literally got this information the day before it would have been destroyed forever.”

The video proved to be life-changing for the man being charged, according to Caldwell.

“Because it was at a different angle than all of the other cameras that were around, our [streetlight] camera caught something that none of the others caught and something that none of other eyewitnesses saw—and that was that the guy who fired the gun fired in self-defense,” Caldwell said. “All of these eyewitnesses said, ‘He did it.’ But what they didn’t see was a guy getting the crap beat out of him and fearing for his life just a few seconds earlier. The next day, the police shared that exculpatory evidence with the district attorney, and they let him go.

“That 20-year-old today is not in prison today, because of smart cities. He’s facing some weapons charges for having a concealed weapon, but his life isn’t ruined. To me, when I think of changing the world with smart cities, this is it. This is more exciting to me than flying cars—this is someone’s personal liberty.”

Since this incident, the city of San Diego has established a policy that determines when police can access video from the streetlight nodes, Caldwell said. Law enforcement cannot use video from the streetlight system as evidence for traffic violations or fender-bender accidents, but the video can be accessed when major incidents occur, such as crimes associated with violence, sexual assault or resulting in a death, he said.

“We’ve done this about 68 other times when major crimes have happened, and we’ve been able to provide critical evidence, just in the course of eight months,” Caldwell said.

Such uses of technology by government can be beneficial, but the notion of the government utilizing camera “creeps some people out”—even when they may be providing even greater access to a corporation at the same time, Caldwell said.

“Amazon Echo has convinced tens of thousands of consumers all over the United States—and all over the world, in some cases—to put microphones in every single room in their house,” Caldwell said. “Then, I try to put one up at end of the block—40 feet in the air—and there’s chaos.

“That isn’t a good thing or a bad thing; that’s just the reality that all of us who are crafting IoT solutions for government in an urban environment have to contend with. The rules are different, and what we can and can’t do with data—the privacy and security concerns—are different.”

With this in mind, San Diego officials are trying to educate the public about the capabilities of the streetlight system and the steps that have been taken to protect individuals’ privacy, Caldwell said.

For example, the San Diego streetlight cameras utilize technology that recognizes the latitude and longitude of each pixel in a video, and the pixels that are located on private property are not kept by the city, according to Caldwell.

“So, our camera system is not … picking up any analytics or raw video footage from anything that is not in the public right of way,” he said.

“We did not deploy our streetlight network with law enforcement and public safety as a principle use case,” Caldwell said. “We haven’t loaded software on it that does facial recognition. More importantly, the camera technology itself is not the not the right type of camera to do facial recognition, even if we decided that we wanted to do that.

“We’re having conversations with them that it’s not a surveillance system, so it doesn’t tilt, it doesn’t pan, it doesn’t zoom, and it doesn’t read license plates. So, we’re being very specific with them, in terms of what we’re doing … with this data, what we’re not doing with it, and—more importantly—what the capabilities of the system are.”

Finally, the city of San Diego does not monitor video from the streetlight cameras for law-enforcement purposes—a key point that has been critical in the city’s discussions with American Civil Liberties Union (ACLU) representatives and privacy advocates who have supported San Diego’s initiatives, Caldwell said.

“We’re not following somebody down the street to see if they commit a crime,” he said. “If someone commits a major crime—a serious crime—then we go back to see if we have information that will help us figure out who did it.”

Caldwell acknowledged that that outcome of the potential capital case has helped city officials calm many fears and convince people about the value of the streetlight-node system.

“As we’ve explained what the technology is capable of—and not capable of—doing, and we’ve had use cases where we can show that there are people who aren’t in jail for the rest of their lives solely because of this technology, people have supported it,” Caldwell said. “Most people are concerned about policing ourselves—what are your audit provisions, and how can we make sure that you’re doing what you’re supposed to be doing with the data—but less concerned about the use cases.”