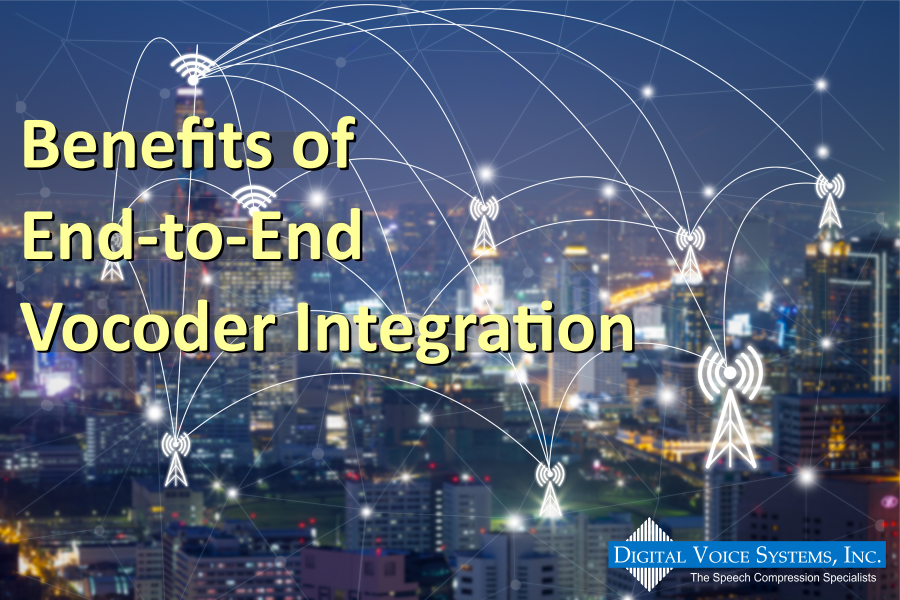 Mission critical situations depend on wireless communication.  It is becoming increasingly popular to connect Land Mobile Radio (LMR) networks such as APCO Project 25 and Digital Mobile Radio (DMR) systems with commercial cellular LTE networks.  This can provide commercial and public safety users with more ways to communicate, while improving overall coverage areas, decreasing system costs and taking advantage of Internet data accessibility.  Yet, not all digital wireless systems are compatible with one another if they do not share the same voice coding technology, known as a vocoder.  Most modern LMR networks use the AMBE+2™ vocoder, whereas cellular LTE networks use the Advanced Multi-Rate (AMR) vocoder.  Transcoding from one vocoder to another can lead to the loss of intelligibility, increase delay and interfere with communications security, and should be avoided in favor of utilizing the same vocoder end-to-end in a communication system. 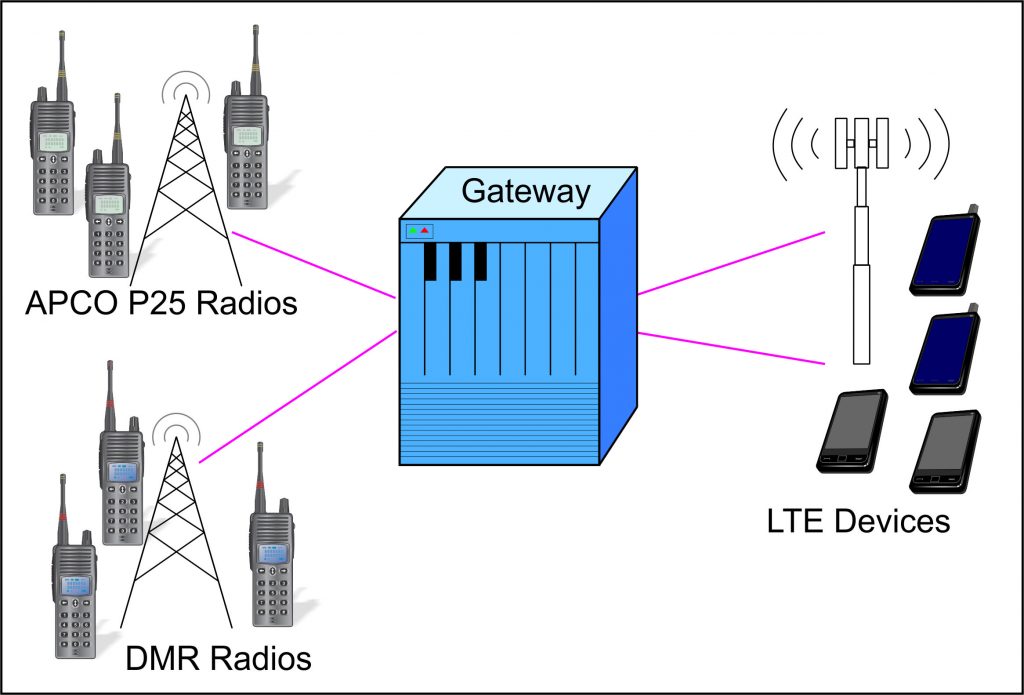 There are numerous systems in place today that transcode between the AMBE+2™ and AMR vocoders. These systems typically employ a gateway[1] function to do the transcoding as shown in Figure 1 and Figure 2.  By their nature, vocoders introduce loss, thereby degrading the original content.  During the process of transcoding from one vocoder to another, additional degradation occurs as has been shown in references [1] and [2].  In some cascading situations, multiple transcoding stages occur in tandem, which can result in severe loss of voice quality and intelligibility.

The best way to avoid transcoding between networks is for all talkers on a communication link to use the same vocoder.  AMBE+2™ is the only vocoder capable of being integrated into both LMR and LTE networks/devices.  The AMR vocoder in LTE networks cannot operate at the low data rates required by the narrow bandwidth requirements of digital radio networks.  This is where the AMBE+2™ vocoder has proven its mission critical worthiness over the past two decades.  Testing has shown that such end-to-end use of the AMBE+2™ vocoder preserves voice intelligibility without increasing delay and also supports end-to-end encryption.

References [1] and [2] demonstrate the reduction in voice quality due to transcoding using Perceptual Evaluation of Speech Quality (PESQ) software which attempts to simulate the results of testing with subjective human listeners.  However, PESQ has many limitations including that it does not produce accurate results when testing speech containing background noise, and therefore is not appropriate in cases of noisy speech as commonly found in public safety and other mission critical applications.

The most accurate method for evaluating voice in noisy environments is to use human listeners.  The Modified Rhyme Test (MRT) is particularly useful for mission critical communication testing as it uses human listeners to test voice intelligibility i.e. one’s ability to comprehend what is being said.  This is in contrast to Mean Opinion Score (MOS) tests which focus on measuring overall voice quality, but may not reflect the level of intelligibility.  It is critically important that a firefighter, police officer or factory worker be understood by their co-workers.  Thus, MRT testing has more relevance to mission critical communications than do MOS tests. 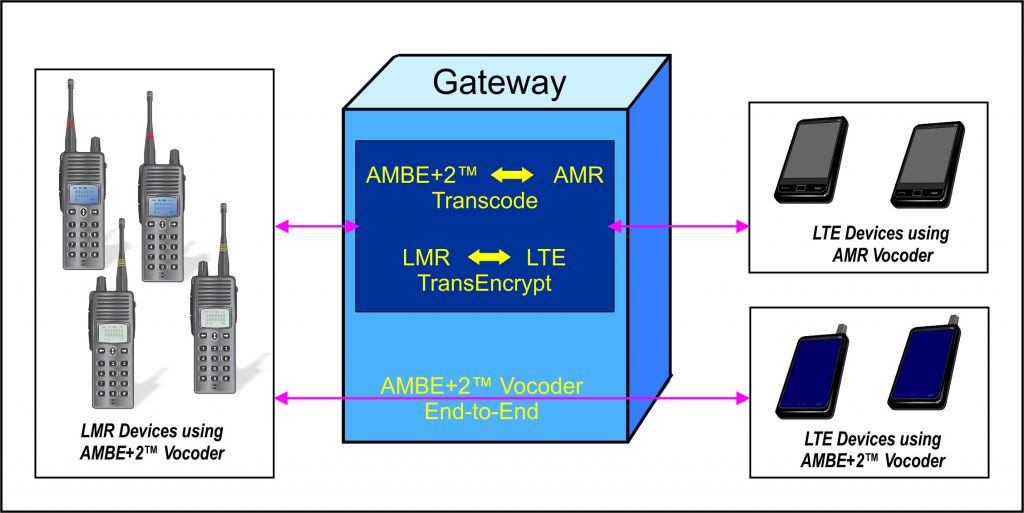 DVSI conducted industry standard MRT tests to quantify the reduction of intelligibility caused by transcoding speech in the presence of typical background noise found in mission critical environments.  The tests were performed in accordance with ANSI/ASA standard S3.2.

The Modified Rhyme Test included transcoding between the 2450 bps AMBE+2™ vocoder used in P25 Phase II and DMR networks and the 4750 bps AMR vocoder used in LTE cellular systems.  Typical mission critical applications rely on RF performance including coverage and support for direct mode operations (see reference [3]) which influenced the bit rate selection for these tests.  The MRT tests compared end-to-end use of the AMBE+2™ vocoder (i.e. without transcoding) against speech transcoded between AMR and AMBE+2™.  The speech samples used in the testing included both male and female speakers mixed with firetruck panel pump, PASS alarm and street noise.

The MRT results showed that the AMBE+2™ vocoder end-to-end use produced significantly higher intelligibility than transcoding from AMR to AMBE+2™.  As shown in Figure 3, transcoding resulted in an average loss of more than 12% in intelligibility implying 12% fewer words would be understood in a transcoded communication as compared to the scenario where the AMBE+2™ vocoder is used end-to-end.  In a recent study (see reference [4]), an MRT score of 75% was considered a minimal speech intelligibility threshold, and as indicated in Figure 3, transcoding between AMR to AMBE+2™ did not meet this minimal threshold in any of the test conditions.  In mission critical applications, the 12% loss in intelligibility due to transcoding can easily make the difference between a high performing communications system and one that has significant impairments.

Effective communication using interconnected LMR and LTE systems is challenged by ambient noise, difficult RF conditions and voice compression. Transcoding creates additional detrimental effects on intelligibility and should be avoided.  By utilizing the AMBE+2™ vocoder in both LMR and LTE systems transcoding is not used and communication intelligibility is maintained.

[1] Gateway is used generically to refer to Media Gateways Session Border Controllers and similar devices that include media format transcoding.