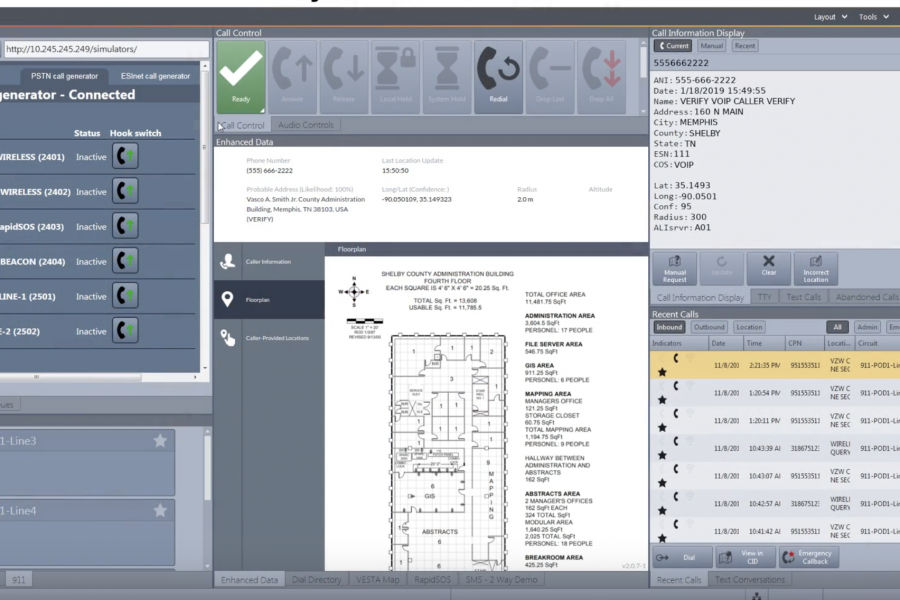 Emergency calls from multi-line telephone systems (MLTS) can include better location and situational-awareness information, thanks to integration work between Avaya, RapidSOS and 911 Secure that is now commercially available to enterprises—and is available for use by other 911 vendors, if they want.

Avaya recently announced the commercial availability of the location enhancement, which leverages Avaya’s PBX, the RapidSOS location database and the SENTRY NG911 technology from 911 Secure. The solution was used successfully in a pilot program in Shelby County, Tenn., according to Mark Fletcher, Avaya’s chief architect for worldwide public-safety solutions.

“We announced this capability with the pilot that we did in Shelby County … earlier this year,” Fletcher said during an interview with IWCE’s Urgent Communications. “It took a few months to get the business and operational sides together and deliver this as an offering. That’s what this is—the announcement of this becoming … publicly available.”

Emergency calls from MLTS or PBX system have been problematic for first responders at times, because the accompanying location information often reflected the main office of an enterprise, not the room where the 911 call was made in an office or campus setting. With the integration implemented by Avaya, RapidSOS and 911 Secure, 911 centers can receive location data that is much more accurate and useful to first responders.

Fletcher said he first presented this notion of an over-the-top approach to supplying better location information to PSAPs when 911 use phones supported by PBX technology in 2012, and now all of the components are available and have been integrated.

“When I first presented over-the-top next-gen 911 to the FCC, it was a fairly simple concept,” he said. “But that construct required that 6,100 PSAPs to deal with hundreds of thousands of business, and that huge, complex mesh operationally was impossible to pull off.

“We really are the delivery mechanism to get this valuable first-responder data—where the person is when they pick up that Avaya phone at their office—to get first responders to that location, whether it be on the fifth floor, the fitness center or a meeting room with a description.

“We found that, a lot of times when this enterprise information comes across, it may say, ‘They’re in Mailstop F290,’ but that doesn’t mean anything to a first responder. The way that 911 Secure delivers us the information about where the device is includes a lot more description, even stating, ‘Go up the stairs on the left stairwell to third floor, and look for the meeting room on the right.’ We can get that to dispatchers.”

Jeff Robertson, senior vice president and general manager of public safety for RapidSOS, echoed this sentiment, highlighting the importance of the 911 Secure descriptions in making the location data of practical use to first responders.

“We really are the delivery mechanism to get this valuable first-responder data—where the person is when they pick up that Avaya phone at their office—to get first responders to that location, whether it be on the fifth floor, the fitness center or a meeting room with a description,’ Robertson said during an interview with IWCE’s Urgent Communications.

“We found that, a lot of times when this enterprise information comes across, it may say, ‘They’re in Mailstop F290,’ but that doesn’t mean anything to a first responder. The way that 911 Secure delivers us the information about where the [911 caller’s] device is includes a lot more description, even stating, ‘Go up the stairs on the left stairwell to third floor, and look for the meeting room on the right.’ We can get that to dispatchers.”

Kevin Kito, president and CEO of 911 Secure, said that the ability of the RapidSOS clearinghouse to store multimedia—a far cry from legacy 911 databases that are limited to roughly 20 words—has caused him to rethink the type of information to include about a location, beyond an address.

“[With legacy 911 systems,] you can only put so much information in there—the building number, the floor, that type of thing,” Kito said during an interview with IWCE’s Urgent Communications. “Now that we can put almost anything we want in there, I was picking the brain of one of my law-enforcement friends [about what would be helpful during a response], and he said, ‘If I could get a picture of the front of the building … So many times, we drive to places, and we’re looking—trying to see behind the trees—to see if it’s the right address.’

“But, if they just had a picture of the front of the building, it would be so much easier. They could just drive up, look at their tablet [with the picture] and know where they’re going … It makes so much sense.”

Accessing location data from the RapidSOS clearinghouse for calls from MLTS phones is not difficult for PSAPs, because that database platform is one they use with increasing frequency, according to Fletcher.

“They’re already dipping into that [RapidSOS] database on 80% or 90% of the calls anyway, because of the cellular location data,” Fletcher said. “Once we saw that, this was the perfect last mile to get our data to public safety. The legacy 911 network does voice, and that’s all it does.”

Currently, only Avaya, RapidSOS and 911 Secure offer the integrated location solution for emergency calls from MLTS phones. Fletcher said he purposely has made the technical details available to competitors, but he is not sure whether other vendors will be willing to implement its

“Everything is built on open standards, so there’s no reason why anybody can’t do this,” Fletcher said. “That’s one of the reasons why I presented over-the-top to the FCC ack in 2012. That made it a matter of public record and prior art, because I don’t believe that things like this should be patented and locked away.

“It’s open technology. I want people to use this, and I’m a bit embarrassed that we’re the only ones that have brought it to market. Maybe there’s a financial model behind that … Whatever, we’re looking to save lives.”

Fletcher said he presented the integrated location solution when speaking on a panel during a recent trade show, but the concept was not embraced by representatives from other vendors in the session.

“We thought everybody would jump on top of this, but they didn’t,” Fletcher said. “They actually were kind of shunning the solution and saying, ‘Well, dispatcher really don’t want that information. It’s confusing.’ I’m thinking, ‘My god, are you really going to take that stance?’

“My comment to him on the panel was, ‘Just because you haven’t figured out a way to monetize this doesn’t mean it’s not a good idea. Unfortunately, the database companies out there have a financial model, that they build to, and this decimates that financial model. So, we’re not seeing them pick up on this.

Kito said he received a similar reaction from other vendors.

“I saw friends from some other companies, and I got some of the same feedback from them,” Kito said. “They’re like, ‘We don’t want to do that, because it’s going to cannibalize our base. Why would we want to do that? It doesn’t make any sense.’

“But, for us, it’s fantastic. The whole point of 911 Secure is that we want to make sure that somebody picks up the phone, they make the 911 call, the call gets directed to the right place, and police/fire/ambulance get to that emergency as quickly as possible. That’s our primary goal. If we can make some money in the background, fine, but we’re not looking to become multimillionaires off of this. We trying to make sure that people are protected. That’s the point of our company.”