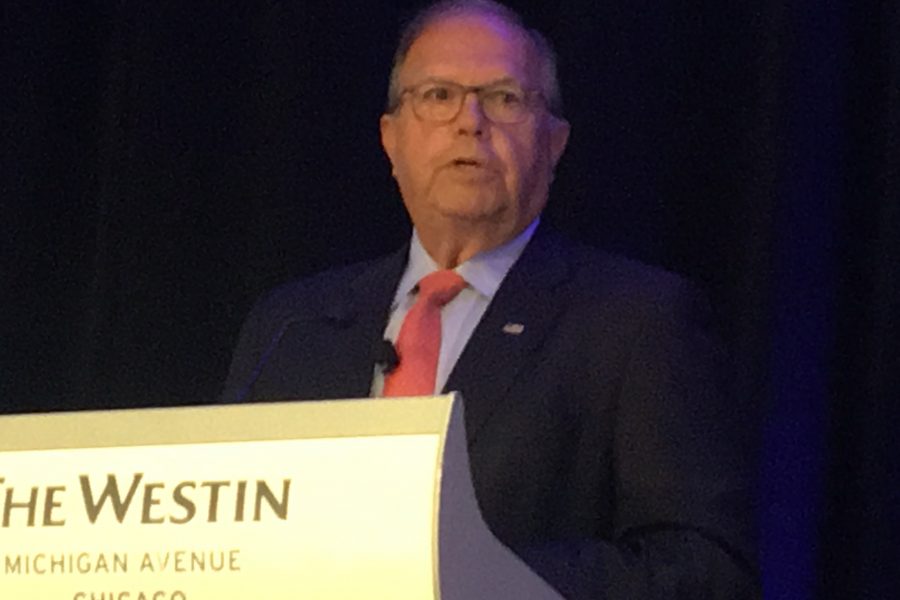 During an interview with IWCE’s Urgent Communications following the keynote, Horowitz noted that he believes the board will make multiple investment decisions annually, because the FirstNet Authority has identified many areas where investments may be beneficial to public-safety users. All investment decisions will be driven by input provided by public safety, he said.

“If we’re doing it right, we should always have something in the pipeline that is a priority, that we’ve gotten the information that is necessary in order to determine whether the time is right to invest in it—whatever it is,” Horowitz said during the interview. “That’s not a once-a-year event; that’s a continuous process.

During last month’s meeting, FirstNet Authority board members approved a resolution stating that any network-reinvestment decisions will be made solely by a vote of the board. Horowitz outlined how he believes that process will work.

“You tee it [a potential investment decision] up for a board meeting,” Horowitz said during the interview with IWCE’s Urgent Communications. “The board gets together, they do the analysis and management presents [information about the proposal]. All of the work would have been done on the procurement side, and we make a decision that affirms the recommendation of the FirstNet agency that’s gone out to a vendor, asked for a response to an RFP, negotiated a deal and now is asking for board approval.

“That’s the aspiration. I don’t know how many times a year I can do it, but I think it should be more than once a year.”

In September, the FirstNet Authority board could approve the expenditure of as much as $78 million. While the board is required to invest the discretionary funding from the AT&T payments back into the network, Horowitz noted that the board has considerable discretion on the amount and timing of any investments.

“We are obligated to use all $78 million, but we don’t have to use it in a specific year,” he said. “One thing I will say is that any monies that come in will be completely invested back into the network over this 25-year period. At the tail end of this period, we’re going to have to have money set aside for a re-compete.

“We’re not going to exceed the amount of money we have ‘in the bank,’ and we don’t feel that we have to use it all up in that fiscal year, but we are going to invest it. So, if you say, ‘Are we going to have all $78 million invested this fiscal year, ending in September?’ Probably not.”

Horowitz said that investments approved by the FirstNet Authority board can be executed in one of two ways: (1) as an open procurement with a formal request for proposals (RFP) that outlines the scope and requirement that a vendor would be required to meet; or (2) as a new task order that is added to AT&T’s existing contract with the FirstNet Authority.

Horowitz provided some details about the formal RFP option.

“We are subject to federal-acquisition rules,” Horowitz said. “Therefore, if there is something that we want to buy that require an RFP, we have to write the RFP, that has to go through a publication process with respondents. We have a procurement team.

“There needs to be a need analysis that’s conducted by the management and strategy team. Once the needs analysis is confirmed, then an RFP can be written and [it can solicit] responses.”

One of the first investment priorities is expected to be an upgrade of the FirstNet core infrastructure.

Another priority for the FirstNet Authority is to expand the coverage and capacity of the FirstNet system. During his interview with IWCE’s Urgent Communications, Horowitz expressed enthusiasm for deployable solutions that already are proving beneficial to FirstNet subscribers.

“I can tell you that deployables, as a category, are probably one of the best marketing pieces that FirstNet AT&T has, as well as for FirstNet the Authority to say, ‘You see, our contractor is doing what they’re supposed to do, and they’re able to respond.’” Horowitz said.

Traditionally, deployable solutions have been limited to vehicular-based offerings, such as cells on wheels (COWs) and cells on light trucks (COLTs). But Horowitz noted that there are other ways to provide deployable communications—notable LTE base stations that can be carried by first responders or by a tethered or untethered drone—that can be more useful in certain circumstances.

“Candidly, we’re indifferent about what the methodology [AT&T officials] choose to deploy is—that’s their job,” Horowitz said. “Our job is getting service [for first responders]. I think, if I were in [AT&T’s] shoes, I’d want to have a lot of different things in my arsenal—I might want to have backpacks, I might want to have something that’s tethered. I would expect that, for them to deliver on the promise of the state plans, they’re going to need different solutions in different places. And I think AT&T will step up to it

“The idea of a drone is interesting, but you need a drone pilot. It has to be line of sight. Maybe I would be better off just having something tethered that stays up all of the time that feeds power and communications.”

Many public-safety officials have expressed an increased interest in the indoor coverage that FirstNet can provide. While in-building coverage is identified as a subset of the FirstNet Authority’s stated coverage initiative, Horowitz questioned whether it would be a target for the organization’s investment efforts, particularly in the near term.

“A lot of this is going to be demand driven,” Horowitz said during his keynote speech. “If there’s a high demand for in-building coverage, it will get built. There’s nothing that FirstNet is going to have to do to push it. It’s going to get built because it’s good for business, and it’s good for AT&T to help them fulfill the promise to us.”

When asked about in-building coverage during his interview with IWCE’s Urgent Communications, Horowitz provided additional insight into the matter.

“If you ask me, ‘Do we need to invest in in-building solutions?’ I’m going to tell you that market demand will dictate that the carrier—AT&T—is going to do what they have to do to inside a building and make sure it works,” Horowitz said during the interview. “Why would I put money in to do something that AT&T is supposed to do (a) under our contract and (b) is likely to do, because it’s the right thing to do for their business?”

In particular, Horowitz said that it would be difficult to make in certain coverage-oriented solutions while AT&T is still in the process of its initial five-year buildout of FirstNet.

“Before we figure out whatever we need to add, we need to have the network fully built,” he said. “Then, you’ll know what your coverage is. Are there going to be pilots and prototype test areas? I’m sure there will be.”

Ultimately, Horowitz said that he wants to see FirstNet become as ubiquitous for public safety as one of the world’s leading corporate brands.

“Getting access to the FirstNet network should be like getting a Coca-Cola,” Horowitz said to conclude his PSCR keynote speech. “The aspiration of the Coca-Cola company is to make sure that Coca-Cola is within 300 feet of you, no matter where you are in this world. And, if you get it, you understand what it looks like, you understand what it tastes like, you have the expectation, and its job is to fulfill your expectation—and your tastebuds—every time you pick up that can of Coke.

“That’s the aspiration for FirstNet. I’m not going to say I want to be Coca-Cola, but if you figure out that you can do that with Coca-Cola—a can of soda—you ought to be able to do it with this network.”