Jerry Gard, Motorola Solutions’ director of engineering for the professional commercial engineering group, said the FCC is expected to approve formally the General Authorized Access (GAA) use of the CBRS band—from 3.55 GHz to 3.7 GHz—later this month. Meanwhile, Motorola Solutions has been beta testing its MOTOTRBO Nitro system with the city of Woodstock, Ill., for more than eight months, operating under a special temporary authority (STA) license from the FCC.

“We’re announcing that we will be participating in the initial commercial deployment phase [for CBRS],” Gard said during an interview with IWCE’s Urgent Communications. “As part of this, we will have customers actually using our Nitro system, which is a CBRS-based voice and data communications system.

“Nitro provides not only voice communications, but it’s also a broadband-wireless, private LTE system. So, any standard, private broadband data application that you want to run over a broadband network, you can use Nitro to do that.”

“This milestone reflects industry commitment to delivering better and faster enterprise communications,” Zidar said in a prepared statement. “We are eager to begin commercial deployments of our CBRS portfolio, to give our customers more capacity and coverage for their voice, data and video communications.”

LMR industry observers recognize the MOTOTRBO name as the Motorola Solutions brand for its DMR system, MOTOTRBO Nitro operating on CBRS spectrum is not at all an LMR technology, according to Gard. 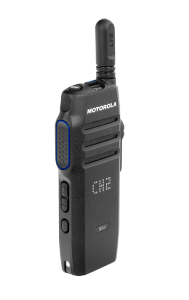 As opposed to narrowband LMR, MOTOTRBO Nitro operates on 10 MHz LTE channels, which means that it supports theoretical upload speeds of as much as 60 MB/s and download speeds exceeding 100 MB/s, Gard said. In addition, MOTOTRBO Nitro provides LTE push-to-talk using Kodiak and WAVE technologies using the SLN 1000 that can also be used to establish a Wi-Fi hotspot, Motorola Solutions’ push-to-talk radio built specifically for CBRS, he said.

In the city of Woodstock, the SLN 1000 is being used to support indoor voice communications for about a dozen users in the local opera house, Gard said. In addition, a MOTOTRBO Nitro solution is being used to backhaul video from Motorola Solutions’ Avigilon surveillance cameras that have been deployed in the city, he said.

“They actually have Motorola Avigilon security cameras out there to monitor some the open spaces—that’s a key use case,” Gard said. “They’re looking at expanding some of their security video here in the near future.”

Dan McElmeel, IT director for the city of Woodstock, expressed optimism about the Motorola Solutions’ CBRS offering.

“The MOTOTRBO Nitro solution and capacity of the CBRS spectrum have improved security and communications in our public spaces,” McElmeel said in a prepared statement. “We look forward to expanding our use of the network and technology to best serve our community.”

Gard noted that MOTOTRBO Nitro will be offered as an “infrastructure as a service” solution, so users will not have to fund a large upfront capital-expenditure payment to install the LTE-based CBRS system. The monthly costs will be based on the number of sites on the system and the number of users supported, he said.

In addition to GAA usage, enterprises will be allowed to bid next year in an FCC auction for Priority Access Licenses (PALs) for 10 MHz usage on CBRS spectrum in a specific geographic area. FCC commissioners are scheduled to consider rules for the PAL auctions at their next open meeting on Sept. 26.

Gard said that he expects that some enterprises will want the extra protections that come with PALs in crowded urban environments, but GAA access should be sufficient in most suburban and rural locations.

CBRS solutions could play a big role in providing in-building coverage, particularly in locations where security is needed, Gard said.

“I think you’re always going to have an element of Wi-Fi, but this will be complementary to Wi-Fi, and—in some cases—people will use this instead of Wi-Fi,” Gard said. “Some of the challenges you run into with Wi-Fi are that it’s congested, doesn’t really support business-critical and secure operations, which is what CBRS and MOTO TRBO Nitro can provide.”

“It’s LTE-based, so everything is encrypted. The only way you get access to the spectrum is via a SIM card that is issued to you by the network operator. So, not just anyone can get on there, so you can control access as to who gets to the network. Plus, it’s all encrypted and secure.”