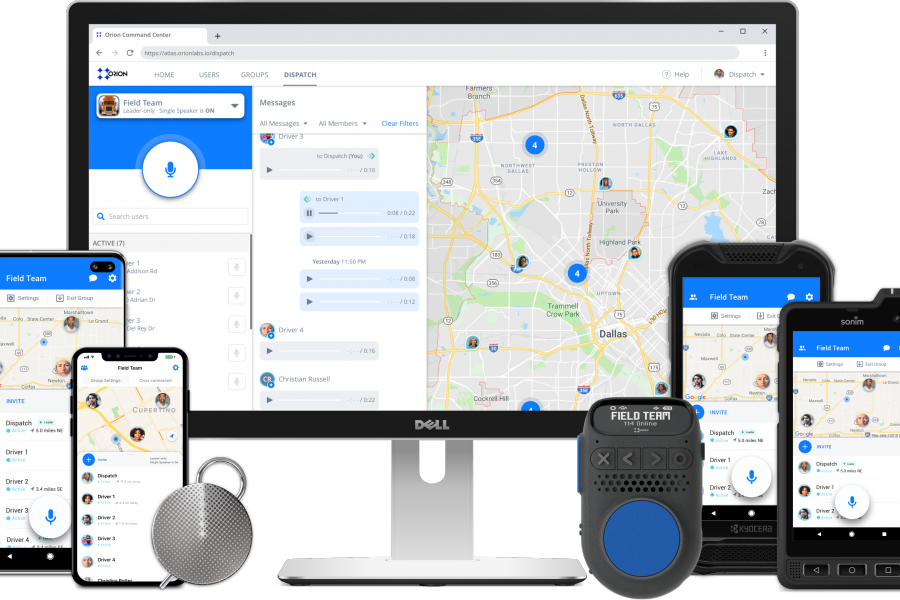 Orion Labs yesterday announced that it will be offering the Orion Dispatch Console, a web-based interface that supports the company’s push-to-talk that leverages cloud technology to let enterprise administrators and dispatch personnel manage a mobile workforce from any location with Internet connectivity.

Orion Labs is best known for its push-to-talk solutions that are used by a variety of enterprises, and the company built the online dispatch console to address customers’ requests for a tool to better manage a variety of use cases, according to Orion Labs CEO Jesse Robbins.

“As we see organizations get to thousands and thousands of users, … people have asked us for a dispatcher or manager view and set of features that kind of combine what we would think of on the public-safety side as computer-aided dispatch [CAD], mapping views and other pieces with our real-time voice clients and other elements,” Robbins said during an interview with IWCE’s Urgent Communications.

“Most important, this product is just the front end to our very, very big platform that runs underneath—that’s really the power of how Orion works and makes us so different from anything that’s on the market.”

Robbins said the Orion Dispatch Console is designed to address myriad needs for transportation entities and other non-public-safety enterprises. The platform is ideal for general-government uses, managing assets and sharing insights enabled by smart-grid or smart-cities initiatives in a flexible platform that can be integrated with a variety of data inputs, he said.

“The ability to have multiple groups, multiple users in multiple groups, and the ability to do location and positioning based on that, and our normal integrations,” Robbins said. “By providing this combined interface, we make really easy for somebody to—starting with something as simple as your Orion heads-up view of where everyone is, what they’re saying, the messages and other data. On the other side, you’ve got your trouble-ticketing system, your dispatch CAD, your multiCAD or whatever. Whatever environment you might be in, we can support.”

Although the Orion Dispatch Console is not designed as a primary solution for 911 centers, it can integrate with at least one 911 computer-aided-dispatch (CAD) system, according to Robbins.

“We are partnered with RapidDeploy, who is similarly cloud-enabled,” he said. “We love that approach, and these are very compatible for those types of users. This is more about managing teams in the field in a command-and-control orientation. You are able to see where they are, what they’re doing, what condition they’re in and then assigning work and working within the Orion workflow.”

Orion Dispatch Console’s cloud-based architecture is able to provide enterprise customers with many advantages when compared with legacy offerings, particularly in terms of being able to deploy quickly in a variety of locations and environments, Robbins said.

“It seems like most of other people who build communications products or real-time-voice products tend to have installed software, so you’ve got to get that into your desktop-deployment environment and get that pushed out to all of the machines and upgrade them, etc. We just take a web-first and mobile-first view,” Robbins said.

“I honestly don’t know if anybody else actually has something like this, but my understanding is that competing products certainly take hours—if not days—to get up and running with similar functionality … This is a fully web-native solution that’s designed for modern environments.”

Orion will offer the Dispatch Console solution in a “software-as-a-subscription-service” model that can fit into an operational-expenditure or capital-expenditure approach for the enterprise customer, Robbins said.

“It’s certainly a lot easier to deploy and support … It typically does result in a cost savings over the existing solutions that they are using, both in terms of absolute costs, as well as not having to do all of that additional work.”

In addition, the intuitive drag-and-drop interface and powerful tools can help enterprises realize their next-generation goals much more quickly than planned, according to Robbins.

“We go into meetings where people will tell you their five-year plan,” he said. “Often, that five-year vision, we’re able to reduce to about five minutes worth of work.”

The Orion Dispatch Console offering will be generally available next Monday, Robbins said.