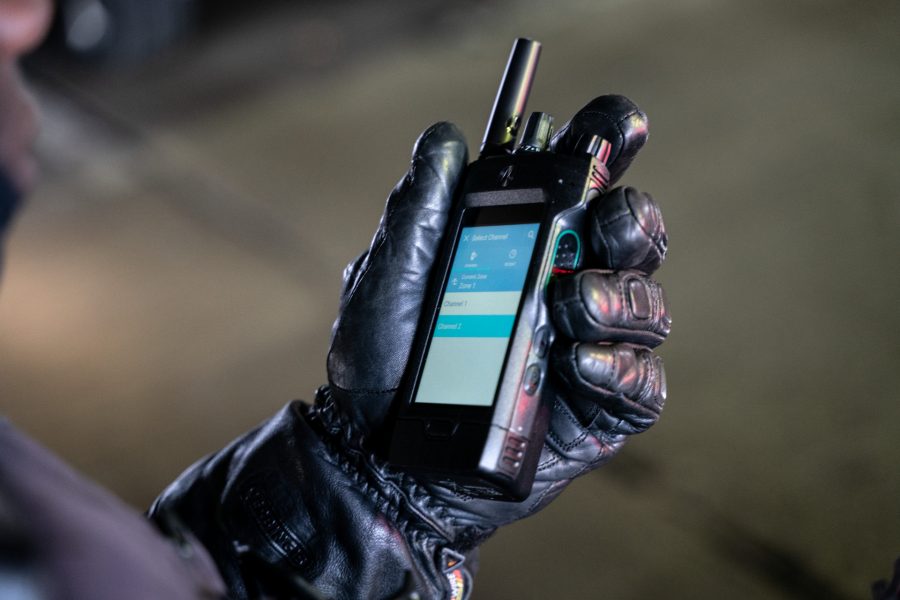 With all of the new broadband-dependent features in APX NEXT, users should understand that the device has the same functionality as the APX line of P25 radios, according to Paul Steinberg, Motorola Solutions’ senior vice president of technology. That is by design, based on input from more than 50 public-safety agencies as the APX NEXT was being developed, he said.

“It’s a radio first,” Steinberg said during an interview with IWCE’s Urgent Communications. “The [public-safety] feedback started with, ‘Great, we love some of the things that you’re doing, but make sure you don’t change its core functionality, which is that it’s a radio first and it has to everything as well as it always has done for us, because we rely on it.’ We took that to heart.”

In addition to that LMR foundation, the first version of the APX NEXT includes a hardened touchscreen, voice-command interfaces and LTE connectivity with FirstNet built by AT&T, although connectivity with other wireless carriers is possible in the future, according to Steinberg.

One of those capabilities is SmartConnect, which allows the APX NEXT to deliver P25 push-to-talk voice over the P25 network or an LTE network, based on the available coverage at a particular moment.

“[Smart Connect is] the ability for the device to sit on both networks, … monitor the quality of both networks, make a dynamic decision on its own which network to use to actually communicate for mission-critical push to talk. So, if for some reason we’re in a P25 coverage dearth and there’s FirstNet coverage, it will transparently switch and tunnel the voice over FirstNet, and the user doesn’t know that. The user gets the same feature set, and it’s absolutely transparent to them.

“It will, of course, prefer P25, because, in general, that’s the higher quality, higher-tier coverage solution for a user. But, if the user happens to have the radio in a different part of the country, they can actually communicate with their home radio network, if they choose to … That gives you a very reliable voice path, because it gives you the power of two networks.”

Steinberg noted that the push-to-talk voice transmitted from the APX NEXT is P25 over LTE, not broadband push-to-talk solutions like Kodiak, WAVE or the much-anticipated mission-critical-push-to-talk (MCPTT) standard developed by 3GPP.

“We’re essentially tunneling P25 over LTE back to the zone controller,” he said. “It’s not mission-critical PTT in the 3G standards.

“It is LMR push to talk over LTE. What we’ve done is that we’ve basically brokered a network path straight into the zone controller. This doesn’t go through Critical Connect or anything like that. Think of this as just another radio interface off of the zone controller. It just happens to fly through AT&T.”

Motorola Solutions will provide the LTE connectivity as part of a monthly subscription for the Smart Connect service, Steinberg said.

“The subscription is basically paid for and managed by Motorola, so the user doesn’t have to deal with the subscription at all,” he said. “If there is a separate subscription that they want for a smartphone, a tablet or a data modem, that—of course—would be on them. But we’ve basically taken that whole thing and placed it into the service offerings underneath the hood.”

Users with an APX NEXT radio also will be able to benefit from another new service, SmartLocate.

“We can actually use the LTE pipe to send data concurrently—up or down—without impeding upon the voice function of the device,” Steinberg said. “A feature called SmartLocate will send up location data from the first responder’s device with a high degree of fidelity and frequency. It’s very low bandwidth, so we can send it over the LTE pipe, independent of P25, so that will always be there. And that will integrate into our command center.”

A third new feature is SmartProgramming, which is designed to simplify the provisioning process associated with P25 radios. Once again, the LTE connectivity in the APX NEXT is critical, Steinberg said.

“Now, we can push software code plugs into the device—pretty much at will—over the LTE background pipe, without the rest of the radio’s functionality being affected or compromised. So, if we want to upgrade the device at any point in time, we can push the content into the device using the broadband. If we need to patch the device or we want to deploy new features on the device, we can do that very incrementally and efficiently.

“With the portal, users can configure their radio exactly the way they want it to be configured. When the radio’s delivered, they turn it on, it actually pulls in the configuration software and activates. There’s no complex radio manager, no complex physical connections to program each radio, no complexities of bringing the radio back to the shop when you want to reflash it—that’s all doable over the air, just like you and I expect in our daily lives [with commercial devices].”

In addition, the APX NEXT radio includes the ViQi Virtual Partner, a voice-assistant technology developed by Motorola Solutions for public-safety users. ViQi (prounounced “Vicki”) supports voice commands to make changes in radio functions—for instance, adjusting the volume setting on the APX NEXT—and to make verbal queries to supported databases in the cloud to get information like license-plate data.

Alam Ali, Motorola Solutions’ vice president for records and evidence systems, said that ViQi has been designed to understand public-safety jargon—for instance, police 10 codes—and is expected to get better with usage.

ViQi is “able to use machine learning in the cloud, so that ViQi continually gets smarter and smarter,” Ali said during an interview with IWCE’s Urgent Communications. “Initially, we’ve trained ViQi to do the most common things, … for things like license-plate lookup, driver’s license information and vehicle identification numbers.

“These are the three types of queries that ViQi will know right off the bat. As we keep going, we’ll train ViQi with more and more capabilities over time.”

When asked whether ViQi would be able to query non-Motorola Solutions databases, Ali said that is a future possibility.

“We’re designing it such that we can query other systems,” Ali said. “It will depend on that other system; what kind of APIs or interfaces does that system have? Can we get the right amount of data to be able to train the natural-language model that we have.

“Those are things that could be done in the future. With this platform, we can integrate with other systems in the future, but it’s unknown right now where those integrations will be.”

“When [ViQi] comes back with results, she doesn’t just blurt them out, in case you’re in front of the suspect at the time. She’ll give you a warning tone and say, ‘Results available,’” Ansell said during an interview with IWCE’s Urgent Communications. “Then it’s your choice, as an officer, whether you want to go back to the car or step away [before listening to the results].

“Actually encoded in the ‘results found’ alert is a measure of the severity. There’s a certain tone that say, ‘There’s no problem with this person at all.’ There’s a different tone that say, ‘We’ve found something, but it’s no big deal.’ Or, there’s a hot-hit tone that says, ‘There’s a warrant out for this person’s arrest.’ The officer can act on that without hearing the complete results, or they can know how important it is to step away from the situation and go somewhere private. So, all of this is built for public safety, from the ground up.”

The APX NEXT as a “smart radio,” according to Ansell.

APX NEXT radios are available immediately, Ansell said. No specific pricing for the APX NEXT radio was provided, but Ansell provided some context about the P25 radio’s cost.

In addition to purchasing the APX NEXT radio, users will need to pay monthly fees to access some of the key features associated with the device, according to Ansell.

“Smart Connect, Smart Locate and ViQi—those are all as-a-service features, because they’re cloud-based and because they require an LTE subscription that we’re managing, so that’s an ongoing cost,” Ansell said. “In order to help our customers manage that, we’re delivering that as a monthly charge feature.

“We want to move to that model, where customers have more flexibility—they can turn things off and on, when they need them, and they can deploy them to different radios at times. We think as-a-service [offerings] serve our customer base better.”