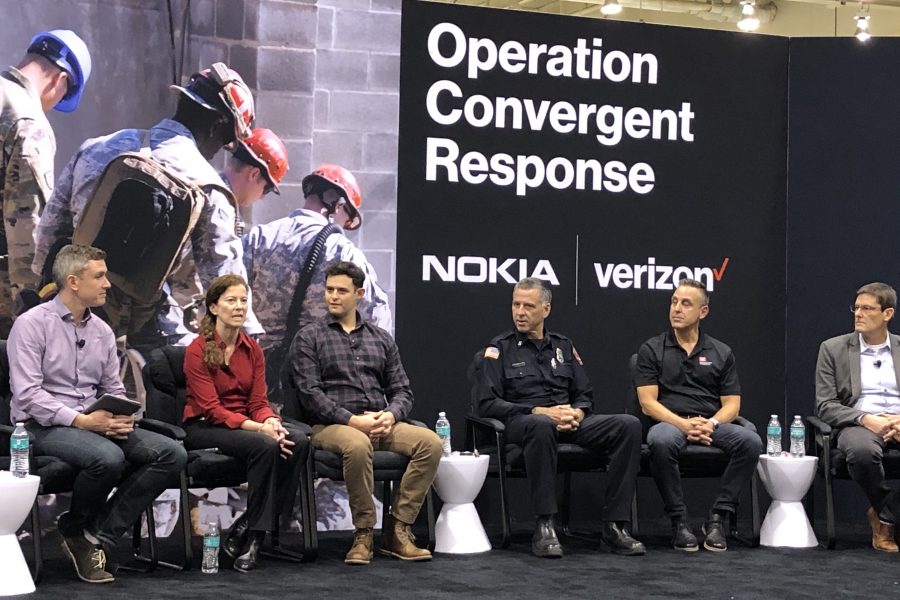 Higher data speeds are the focus of current 5G deployments, but some of the performance characteristics that are expected to prove most valuable to public safety—low latency, high reliability and network slicing—likely are at least a year away, according to industry and first-responder experts.

During a 5G session conducted at the recent Operation Convergent Response (OCR) 2019 event co-hosted by Verizon and Nokia in Perry, Ga., panelists identified some of the promises associated with 5G, the much-hyped latest generation of wireless technology.

At the top of the list is transmitting high-definition video in a manner that is most useful to public safety, according to Maggie Hallbach, Verizon’s vice president of state, local and education markets.

“One of the key challenges of 4G is how you actually continue to provide real-time video, immersive video,” Hallbach said during the panel discussion. “What is most exciting [about 5G], from the conversations that I’ve had with first responders, is being able to not only deliver that high-definition video—but maybe more importantly—being able to take that as a data set and actually do artificial intelligence against that data set.

“Let’s be real. You can have a city—take the city of Atlanta—with tens of thousands of cameras, but nobody’s going to be able to watch all of that. What you want is that video feed being fed into computational algorithms that are saying, ‘Pinpoint for me anomalous behavior, so my first responders know what I want them to be looking at’ … The more you can actually empower your first responders with actionable insights, that’s going actually to stop bad things from happening and—if they do happen—to literally not only cut hours and days out of it [the response time] but also maybe get you into anticipatory types of intervention.”

“Over a 5G network, we saw a 3 times improvement of their video quality, which greatly enhanced the accuracy and ability of their AI detection network,” Stirton said. “So, we were able to detect threats using these autonomous drones.”

Kirk McKenzie, captain and technologist for the Cosumnes fire department in California, said he believes such video and sensor information can be leveraged to enhance the efficiency of response efforts, particularly with artificial intelligence (AI) and machine learning (ML) technologies accelerating analytics processing.

“There’s an opportunity that, when you call 911, to not just talk to the dispatcher and paint a picture with words, because we don’t have time,” McKenzie said. “What could we see? Text messaging? Bad guys have been using that for 25 years. Video, 360 [degree] video. Machine analytics could be getting front-end information into dispatch.

“ML and AI could be running machine-vision analytics on a multi-casualty incident and dispatching the appropriate volume of units, instead of waiting for us to arrive and say, ‘Command, Engine Center 3’s on the scene. We’ve got an MCI. Notify the disaster-control facility, start a second alarm … and … and.’ That could all be done with these analytics that are going to be enabled in 5G.”

Basil Marsh, CTO of Nokia’s government, transportation and energy team, said that 5G represents a new type of wireless architecture that leverages edge computing that is distributed throughout the network to route user traffic in the most efficient method possible, as opposed to having all traffic routed through the network core. This approach enables low-latency services and the distributed architecture also will enhance reliability, he said.

These low-latency and high-reliability characteristics of 5G likely will begin appearing in commercial networks in about a year, Marsh said.

Further into the future—when carriers upgrade to 5G network cores—public safety also will be able to benefit from network slicing, a technology that is designed to let traffic be prioritized based on a customizable factors, including the type of application being used, according to Marsh.

“What that means is I could have voice, video or you name it on the device, and each one of those will have a class of service coming back into the network,” Marsh said. “If the video or voice has the highest priority, 5G extends that priority all the way to the air interface.

Greg Formosa, chief of the telecommunications systems engineering division with the U.S. Army Corps of Engineers, said that he is particularly excited about the potential benefits of edge computing and noted that his organization is deploying 5G in four locations.

But for all of the enthusiasm he has for 5G and its potential, Formosa said first-responder agencies need to test and assess some of the new applications in the difficult environments that public safety faces regularly.

“Where we’re really concerned is that we will develop those systems and apps at our test facilities, in a fixed environment. But what happens when we deploy, and we’re in an area that has been devastated?” Formosa said. “We know that we’re most likely not going to have the same type of 5G available to us, with millimeter-wave, beam forming and sub-cells. We need something that can travel with us.

“With [a fire department], I start thinking, ‘If they start relying on 5G, when they go into a building and head down into the basement, will there be 5G there?’ If there isn’t, then we need to design around that concept.”

Nick Nilan, Verizon’s director of product development for the public sector, said the excitement surrounding 5G should not overshadow the fact that 4G LTE likely will be used for another decade.

“I can’t stress enough that 4G is going to be around for a while, and it’s an evolution toward 5G,” he said.