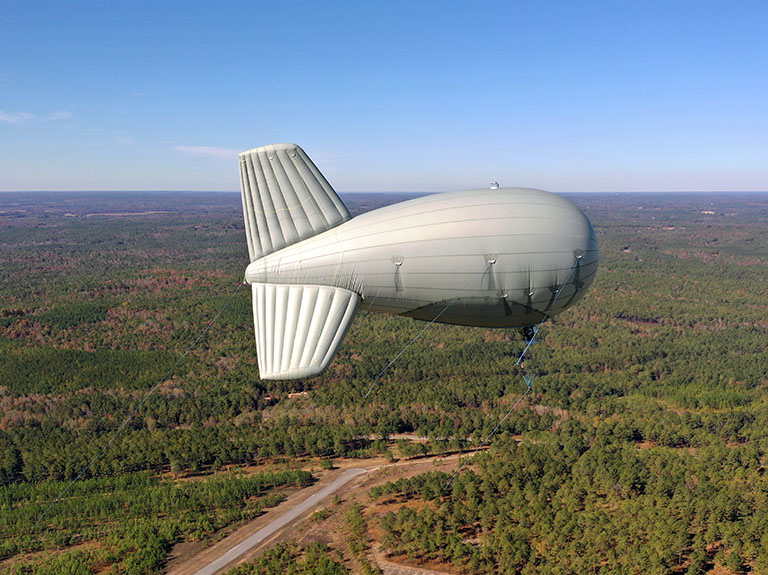 FirstNet One—the tethered aerostat announced earlier this month that can provide LTE coverage from a height of about 1,000 feet—promises to be a valuable addition to the FirstNet deployable portfolio, particularly when a response effort is needed for a period of weeks, according to an AT&T official.

“It’s another tool in the toolbox,” Fred Scalera, associate director for AT&T’s FirstNet team and a leader for the Response Operations Group (ROG) that oversees deployable use for FirstNet users.

When deployed, FirstNet One is designed to act as a very tall LTE tower, with a lengthy tether supplying the airborne eNodeB base station with both power and fiber connectivity to a deployable ground unit. FirstNet One can provide extended LTE coverage to a large geographic area—one that could require several SatCOLTs to cover—for weeks at a time, Scalera said.

Scalera said the potential benefit of a long-term LTE deployable solution like FirstNet One became apparent as multiple SatCOLTs were needed to provide first responders with broadband connectivity in the Florida panhandle after Hurricane Michael hit in the fall of 2018. One SatCOLT remained in the area for more than five months, he said.

“When we have that big of an outage, that’s the perfect use [for FirstNet One], so we don’t have all of these structures running around and don’t have to fuel all of these vehicles,” Scalera said during an interview with IWCE’s Urgent Communications. “You’ll have one continuous piece of equipment up there covering that larger area.

“It’s about getting units back in service for us for other responses—secondary storms. Sometimes we have different things going happening across the country. This could replace 3, 4 or 5 [SatCOLTs] that might be out there.”

In addition to freeing up SatCOLTs, the FirstNet One blimp also reduces the amount of personnel that has to be deployed in a geographic area to support LTE connectivity via other means, according to Scalera.

“If we’re flying a Flying COW [cell on wings, an LTE base station on a drone], it requires two pilots to keep it flying for 24 hours per day,” Scalera said. “It comes down for 40 minutes per day for maintenance, and we have to rotate pilots.

“Here [with FirstNet One], it’s just a person pretty much monitoring the balloon, wind conditions and the helium pressure inside the unit. If all goes right, about every three weeks, we pull it down, pump it back up and put it up.”

While retracting FirstNet One for such maintenance—typically with additional personnel on scene, although one person could do it in good conditions—can be accomplished in a few hours, the initial deployment of the LTE blimp currently takes more than a day, Scalera said. For this and other reasons, FirstNet One would not be the first deployable at an incident scene, as AT&T is contractually required to provide broadband coverage to first responders within 14 hours of a request being made.

“We’re never going to meet a 14-hour RTO with the flying COWs or FirstNet One,” Scalera said. “There are just too many logistics to them to do that … When you’re on scene, to get it fully vetted, tested, blown up and follow all of the safety guidelines that we have, it’s a day-and-half to two days to launch FirstNet One.”

Removing FirstNet One from a location also can take an extended amount of time, which could limit the ability to deploy the LTE blimp during a wildfire response—especially in situations changes in wind direction could put the FirstNet One crew in the path of a blaze, Scalera said.

“It’s not easy to get this thing packed up and get out of the way in four or five hours,” Scalera said. “With the Flying COW, we can put it up and get it down in minutes. We can pack it up quickly … It’s just a matter of bringing the thing down, and you drive away.

“It’s not as easy with this [FirstNet One]. When you bring it down, I want to say it’s still half a day or a day to pack it up and get out of there. So, I’d be concerned with a fire, until we learn more and get better at it.”

In addition, deploying FirstNet One during a wildfire response would require significant coordination with other aspects of effort—for instance, ensuring that the LTE blimp does not interfere with fire retardant that is dropped from planes. Scalera said he is glad that the FirstNet ROG team includes so many members with the fire and law-enforcement backgrounds to anticipate such situations.

Current plans call for FirstNet One to provide broadband connectivity with satellite backhaul via the 700 MHz Band 14 spectrum that is licensed to the FirstNet Authority, according to Scalera. In situations where high-speed fiber or microwave backhaul is available, FirstNet One can support the payload necessary to also support LTE via one of AT&T’s commercial bands, as well as Band 14, Scalera said.

It is important that FirstNet One be used to support the mission of broadband connectivity for first responders, as opposed to ancillary purposes, Scalera said.

“I would never want to have cameras on any of our LTE network,” he said. “As soon as you put cameras on it and law enforcement is involved, there are questions about who was picked up, who is watching the video, and did you record it while it was in the air.

“We’re the network guys … We don’t want to get lost trying to do five different things when we’re supposed to be out there providing the network.”