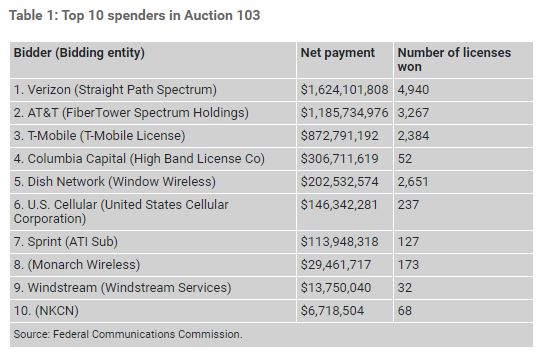 Shocker! Verizon was the big spender in FCC’s millmeter-wave auction

Verizon spent the most money of any participant in the FCC’s biggest-ever millimeter wave (mmWave) spectrum auction. The operator spent roughly $1.6 billion for a total of 4,940 spectrum licenses across the country.

AT&T was a close second, however, spending a total of around $1.2 billion on 3,267 spectrum licenses.

T-Mobile – which was widely expected to walk away with the bulk of the licenses in the auction – came in a distant third, with $873 million in total spending across 2,384 spectrum licenses.

Operators including Verizon, AT&T, T-Mobile and U.S. Cellular are using mmWave spectrum in part for their 5G network buildouts. However, the use of mmWave spectrum comes with a big caveat: Although it can transmit massive amounts of data at blistering speeds, signals in mmWave bands can only travel a few thousand feet. As a result, mmWave 5G buildouts have mostly been confined to crowded downtown areas and aren’t expected to reach into suburban or rural areas anytime soon.

Twists and turns
That Verizon bought so much mmWave spectrum in the FCC’s latest auction – dubbed Auction 103 – comes as a surprise, considering the operator has already spent billion of dollars on mmWave licenses from Straight Path, XO Communications, Nextlink, Sunshine, Highland Holdings and others, as well as hundreds of millions of dollars in other recent FCC mmWave spectrum auctions.

All that spending apparently indicates Verizon’s interest in doubling down on mmWave spectrum – the operator earlier this year said it plans to double the number of cities where it will offer its mmWave-powered “ultra wideband” 5G service. The operator’s latest license purchases could indicate its mmWave coverage area will expand further across the country.