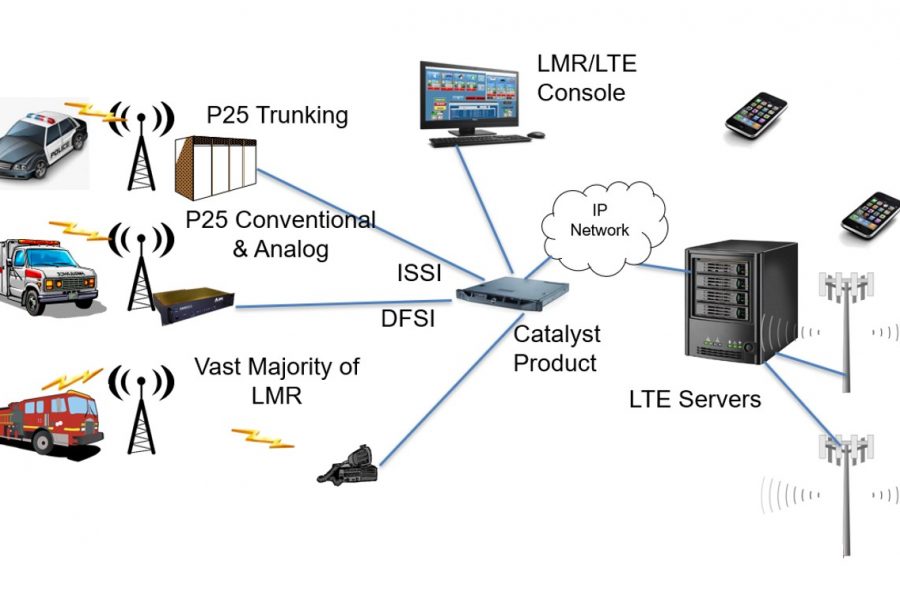 Catalyst Communications Technologies this week announced a new interoperability platform that is designed to link 3GPP-standard mission-critical-push-to-talk (MCPTT) services over LTE with a variety of land mobile radio (LMR) systems, including P25, DMR, NXDN and proprietary technologies, according to Catalyst President Robin Grier.

“What we’re building is really a standards-based interworking solution for FirstNet and for LMR broadly—not just P25. We recognize that there are a lot of different radio systems out there,” Grier said during an interview with IWCE’s Urgent Communications. “While [P25 standard] ISSI is a very rich interface and provides the best interface for interworking … [it is not commonly available]. Even those who have trunked P25 systems, not everybody has ISSI. And even those don’t have the capacity on their ISSI interface to really support it.

“Our focus has been on the standards—the 3GPP MCX standards, the P25 standards, the DMR standards—but also looking at those proprietary systems, like SmartNet and EDACS—and there’s still a lot of MDC-1200 out there. Those guys need to interoperate, as well, so that’s what we are building.”

Catalyst has demonstrated prototypes of the platform—known as IntelliLink Interworking Solution—before public-safety representatives at the company’s laboratories, exhibiting both a “very simple user interface” on a dispatch console and a version with a more robust feature set, Grier said.

“With both of those interfaces, we were able to show how the administrator or the dispatcher could change channels or change groups on both sides, gets information like the unit ID, the emergency, and can do private calls from our console out to both MCPTT and LMR.”

Catalyst developed the IntelliLink Interworking Solution after winning a $1 million contract from the U.S. Department of Homeland Security (DHS), according to Grier.

“First and foremost, we’re doing this in support of FirstNet,” he said. The contract we have is with DHS, and they are very much supportive of FirstNet and have a mission to advocate for public safety, so that’s where we are.”

Grier said that Catalyst is still awaiting certification of the IntelliLink solution from the AT&T and FirstNet labs.

“We have it working today,” Grier said. “We are in communication with AT&T and FirstNet on it, and when they are ready to allow us on, then we’ll complete that step to be able to say that it’s certified—or whatever term they want to use—for use on their network.”

“We don’t have to wait on Release 16 for the Catalyst solution to provide interworking. We can go ahead and provide that now, and we’re demonstrating that with the MCPTT server we have in our lab, which I think is Release 14. We are using standard 3GPP MCX protocols to access the system, we’re just not going through the Interworking Function to get there. But everything that we are doing is standards-compliant.

“It doesn’t use the Interworking Function, but it is an interworking solution.”

Grier said he believes the current IntelliLink platform will have a long-term future role in delivering LMR-MCPTT interoperability, even after solutions providing the Release 16 Interworking Function are available in the marketplace.

“I would anticipate that we would continue to sell and support this interface, because we see a lot of value in it.”

Catalyst’s new MCPTT interoperability platform requires donor devices from the LTE and LMR systems to establish the link between the networks, Grier said.

“The solution that we have demonstrated and we’re ready to use on the LMR side uses a control station—it’s our radio,” Grier said. “So, the cost is that you need to have a mobile radio, it needs to be on your radio system. If you’re leasing time from a statewide or SMR system, I guess you’ve got to pay air time for that radio to get on it, and then the same thing on the LTE side—you need a connection there.”

Grier declined to discuss pricing for the IntelliLink Interworking Solution, noting that there are numerous variables that could impact deployment costs. However, IntelliLink should be less expensive than a solution that is fully compliant with the 3GPP standard Interworking Function, he said.

“We anticipate that, because it’s a simpler connection, it should be at a lower price than a full Interworking Function connection,” Grier said.