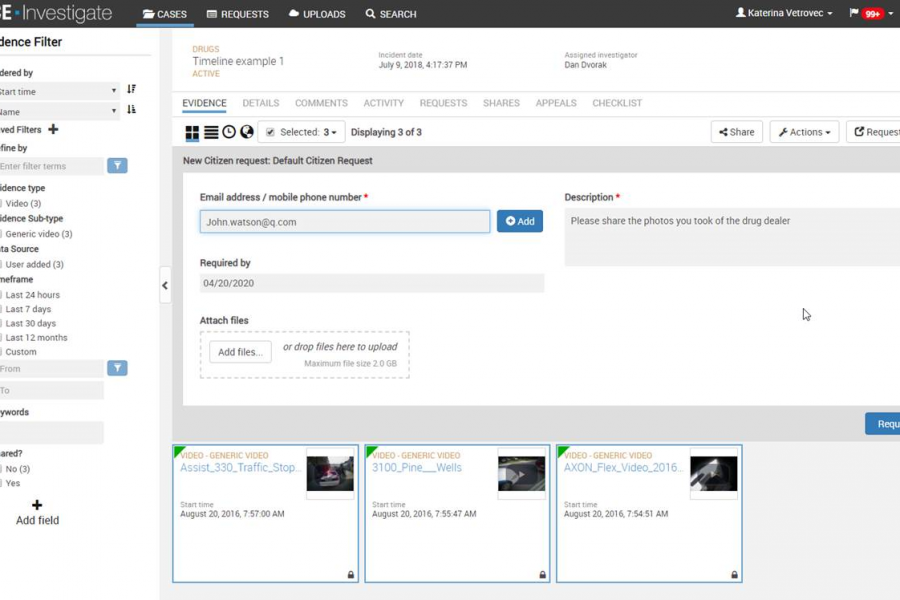 NICE recently announced that its Investigate Xpress digital-evidence-management platform is available at no cost to public-safety entities wanting to gather and process evidence this year without the need for face-to-face interaction—a key characteristic in a period of social-distancing guidelines during the COVID-19 pandemic.

Patrick Botz, director of global marketing for NICE, said this offering provides police department and public-safety answering points (PSAPs) with a more efficient alternative to gather evidence. Without such a solution, personnel typically must physically visit a location to get evidence—for instance, video from a surveillance camera or even the recording from a 911 call—and download it to a thumb drive or DVD.

“What [law-enforcement agencies and PSAPs] are trying to do is do as much remotely as possible,” Botz said during an interview with IWCE’s Urgent Communications. “What we allow is ensuring that they basically don’t have to go on scene.

“And the beauty is that we’re able to get folks up and running in 48 hours at no cost. We’ve gotten over a dozen agencies up and running over the last couple of weeks in just 48 hours.”

NICE Investigate Xpress is a streamlined version of NICE Investigate, an end-to-end digital-evidence-management (DEM) solution that automatically creates integrates evidence from various internal sources into case files, according to Botz.

“Essentially, the full version has automated connectors to all of your evidence sources,” he said. “So, it connects to your body-worn camera. It connects to your dash cameras, your RMS, your CAD system—every system you have, we connect to. We automatically pull in all of the evidence, and then you can do what you need to do to work the case.

“The main difference between Xpress and the full version is that you manually upload the evidence in the Xpress version, which is still valuable—you basically send a text message to a citizen, and they can upload from their phone an image or a video. It’s not an automated process, but that’s still huge difference when compared to going on scene and trying to collect evidence.”

“[Public-safety personnel] don’t look at the camera directly; they would request evidence,” Vetrovec said during an interview with IWCE’s Urgent Communications. “They just see that that the camera is there. They have that store and the store owner’s name likely in the database, so they can send that request straight out of the maps and e-mail, ‘Here’s the link. Please upload your video.’”

When dealing with evidence from third parties like businesses or citizens, this upload process is the same on both the Investigate Xpress and Investigate platforms, Botz said. With the full Investigate platform, evidence from internal sources is uploaded automatically, but this integration functionality can require weeks or months to integrate, making the Xpress version a better option to agencies wanting a solution that can be deployed quickly, he said.

Both Investigate Xpress and NICE Investigate are CJIS-ready and provide chain-of-custody assurance for evidence entered into either version of the platform. This is a key factor in being able to use the evidence practically in court, according to Vetrovec.

“When we’re speaking with courts, we keep hearing that they are dropping cases, because they don’t want to deal with contaminated DVDs and all of that, so they reduce what they can prosecute,” Vetrovec said. “Again, we are trying to help justice by letting them do more things electronically than before. That’s stimulating a lot of ‘Ah ha’ [moments].

“We are thinking that—even after we get over the virus—it will never be the same. They will understand why this is of value to embrace fully digital, online evidence processing, because it makes everything more flexible and faster, for sure …We are saving a major amount of time by making it all instantaneous.”

In addition to providing the Xpress platform at no cost, NICE also will provide agencies with free storage for up to 5 terabytes of evidence during the rest of 2020, Vetrovec said. Both Xpress and the full Investigate platform include codecs for all video types, so video evidence can be viewed within the systems, no matter what format was used to record it, she said.

When the no-cost NICE Investigate Xpress offer expires, the public-safety agency using the platform is not obligated to continue with a paid version of the solution, Botz said.

“We’re offering it for free for this year,” Botz said. “At the end, they can either get back all of their collected information and recordings—we’ll give them all of that in a format they can use—or they can continue for a small fee [for NICE Investigate Xpress]. And many of them want to move up to the full version [of NICE Investigate].”

NICE has not announced the pricing for the paid version of Investigate Xpress, but Botz said it would be “minimal.” The cost to upgrade to the full version of NICE Investigate depends on the number of integrations that an agency wants into the system, in terms of evidence sources controlled internally and those from trusted partners, according to Vetrovec.