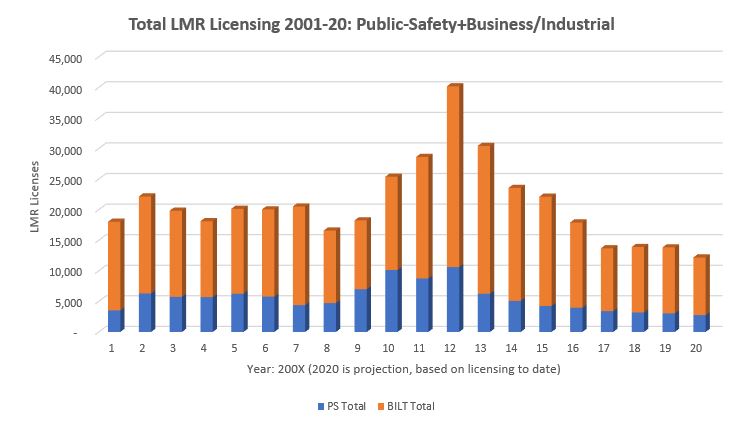 Hampered in part by economic slowdowns caused by the COVID-19 pandemic, land-mobile-radio (LMR) licensing activity in both the public-safety and business-industrial sectors this year is on pace to set all-time low marks, according to data in the FCC’s online Universal Licensing System (ULS) database.

Through July 1, the FCC has received 6,092 LMR license applications—1,378 for public-safety systems and 4,714 for business-industrial networks—including 600 applications that are still pending approval. These figures are based on information in the ULS database as of yesterday evening—the 183rd day of a 366-day leap year.

If all pending applications are approved, the first-half total would project to 2,756 LMR licenses being granted for the full year, which would represent a 9.5% decrease compared to the all-time low record of 3,046 public-safety licenses being granted that was set last year. This would mark the eighth consecutive year that public-safety LMR licensing activity has registered a decrease, and it would be a fourth consecutive year in which an all-time low total was registered.

This projected business-industrial total also would represent a new all-time low—8.2% less than the sector’s previous record low of 10,276 set in 2017.

Not surprisingly, business-industrial LMR activity dropped noticeably as many sectors of the U.S. economy were virtually halted amid shutdown orders in response to the COVID-19 pandemic. After first quarter at a similar LMR licensing pace to the last two years, applications during the past three months have declined by about 30% during the past three months, when the economic impact of the pandemic have hit enterprises hardest.

There also was a second-quarter decline in LMR activity in the public-safety arena, but it was not nearly as dramatic as it was in the business-industrial space. Public-safety LMR licensing activity has trailed last year’s pace by a notable margin almost all year, with a decrease of less than 5% during the second quarter—a trend that could be reflective of the lengthy deployment cycles of public-safety LMR systems, which often are more resilient to short-term economic trends than the business-industrial sector, according to sources.

In addition to the economic impacts associated with the COVID-19 pandemic, the emergence of push-to-talk-over-cellular pandemic has been cited as a potential factor in the reduced LMR licensing activity this year, particularly in the area of healthcare communications and other aspects of the business-industrial sector, according to industry sources.

There also is growing anecdotal evidence that push-to-talk-over-cellular solutions increasingly are being used by public safety during the pandemic, but typically as an augmentation to LMR communications, as opposed to being a replacement for LMR systems, sources said.

When the first-half LMR activity for the public-safety and business-industrial sectors are combined, the year-long projected total of 12,184—assuming all applications are approved—would represent a 44.9% decrease compared to the 22,113 licenses approved in these areas in 2015. It also would be a 69.7% decrease when compared to the all-time record high of 40,171 LMR licenses approved in 2012, but it should be noted that this figure largely was the result of the FCC’s narrowbanding mandate that was supposed to be completed by the end of 2012.