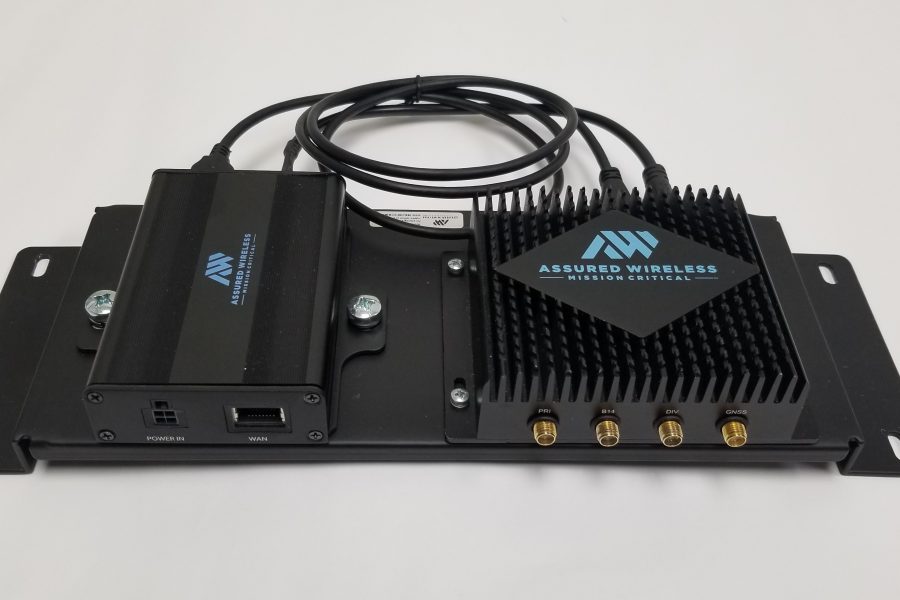 Assured Wireless this week announced its AW12 family of high-power user equipment (HPUE) products that have been approved for use on FirstNet, the nationwide public-safety network built by AT&T that leverages 700 MHz Band 14—the only U.S. spectrum where the highest-power HPUE equipment can be used.

With HPUE gear, FirstNet subscribers on Band 14 spectrum are expected to experience an 80% increase in LTE signal range from a cell site when compared to a typical LTE device, Assured Wireless officials have stated publicly. This capability can help users connect to the FirstNet system from beyond the normal LTE coverage footprint, including remote locations outdoors or to reach an outdoor cell site when the user is inside a building.

“If there’s an existing public-safety [broadband] user who want to experience better coverage through HPUE, this is the way to go,” Bob LaRose, vice president of business development at Assured Wireless, said during an interview with IWCE’s Urgent Communications. “We think it could convince them that they really want to switch over to FirstNet.”

LaRose noted that increasing the power of an LTE device is especially important to first responders. While consumer typically are focused on downloading, first responders often need to upload information—report, queries, pictures or videos—from the field, and HPUE can greatly enhance their ability to do this effectively.

“The only way to upload things more reliably and with better speeds is with HPUE,” LaRose said, noting that the improved signal strength of HPUE also improves the download reliability and data rates for users, particularly those located near the typical edge of a Band 14 cell coverage area.

This much-anticipated HPUE capability will be available in two primary form factors, according to Assured Wireless.

The AW12 High Power LTE Modem is a small, standalone product that can connect to a laptop computer or a router, effectively enhancing the coverage of the device when Band 14 coverage is available.

Assured Wireless also unveiled the AW12-HP High Power LTE Module that can be embedded into routers and IoT devices to improve connectivity for FirstNet users seeking to access Band 14 cell sites. This module is a key component in Airgain’s announced AirgainConnect AC-HPUE antenna-modem that is expected to be available by the end of this year.

Goocher said that Assured Wireless is taking pre-orders for the HPUE gear beginning this week, noting that the company is working with AT&T to identify some “early adopters” of the technology.

“It will be some number of weeks or months before AT&T is ready to actually release this to the general public,”

LaRose said that the Assured Wireless products have “undergone extensive testing, both on land at sea.” One benefit of the AW12 HPUE devices is that they do not require a highly trained engineer or technician to install them and begin experiencing improved connectivity. However, optimizing the connection to achieve peak performance does require a little more effort.

“We’re going to make it as easy as possible,” LaRose said. “In our experience, it’s pretty much plug and play—you just plug it in the port, and it works. That being said, to fine tune that connectivity, you need to get into menus and make some choices.”

Many in the public-safety community have been anticipating the availability of HPUE for some time, particularly first-responder agencies that have deemed FirstNet coverage as being inferior to the LTE footprint provided by other commercial carriers—Verizon, in most cases.

Figures released earlier this year by both carriers and third-party sources indicate that Verizon’s LTE coverage advantage has narrowed to 70,000 square miles. If FirstNet subscribers are able to realize the performance gains from HPUE on the outskirts of AT&T’s network, that effective coverage gap presumably would narrow further, if not disappear entirely.

“HPUE has been a critical element on the first-responder solutions roadmap as envisioned by the architects of FirstNet,” Agnew said in a prepared statement. “The introduction of these innovative new products from Assured Wireless Corporation will significantly enhance the reliability and performance of the communications tools that will help save lives and protect first responders.”

“As we worked hand-in-hand with public safety to plan for the FirstNet network, they stressed to us time and again that they needed a dedicated comprehensive device ecosystem to address their unique critical communication needs,” Bratcher said in prepared statement.

“Leveraging the unique license aspects of the dedicated FirstNet spectrum (Band 14) to support higher power user devices for use on FirstNet is another example of the FirstNet service meeting public safety’s communication needs. It is exciting to see their vision becoming reality.”

Assured Wireless board member TJ Kennedy, co-Founder of the Public Safety Network and former FirstNet Authority president, described the availability of HPUE as a “game-changer” for public safety.

“It is terrific to see Assured Wireless Corporation bring this enhanced capability to first responders, who can now leverage 3GPP standards based high power solutions to enable the mission-critical needs of police officers, firefighters, and emergency medical services personnel in rural, suburban and urban communities,” Kennedy said in a prepared statement.

While the 20 MHz of 700 MHz Band 14 spectrum that is licensed to the FirstNet Authority—and being deployed by AT&T for a 25-year contract period—often has been lauded for its natural signal-propagation characteristics, the HPUE capability is what differentiates it significantly from other LTE airwaves in nearby bands.