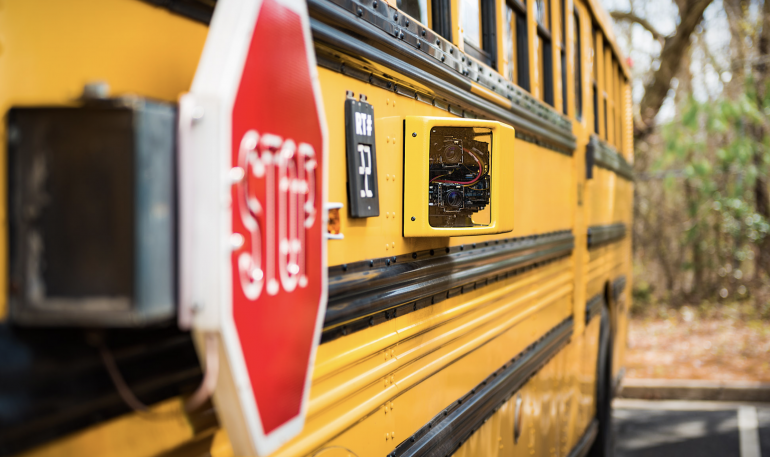 “The issue of motorists driving by bus stops is a serious one and could result in a death any day,” Mike Hardesty, director of transportation for Carroll County Public Schools in Maryland, said during an interview with IWCE’s Urgent Communications. “These cameras aren’t going to prevent anybody from going through a bus stop sign, but evidence where the camera had been show that about 90% of the violations are not repeat violations. In other words, of the people who get caught the first time, 90% of those don’t get caught a second time.

“So, it’s a preventative thing going forward, and I think that’s invaluable.”

Making this system even more valuable is the fact that Carroll County Public Schools is not paying any money for the BusPatrol technology package. Instead, BusPatrol receives revenue from the fines paid by drivers of vehicles that illegally pass a school bus after the activation of its stop arm—the small stop sign that is activated when the bus is stopped to let passengers board and deboard.

“It’s pretty exciting,” Hardesty said. “It’s a five-year agreement, but it’s no cost to the school system, and we’re receiving all of this technology that we have desired for years at no cost to us.

This no-cost arrangement is a stark contrast to the LMR systems that Hardesty had explored as to provide push-to-talk communications with the drivers of the 311 school buses—owned by contractors—and GPS-based fleet tracking technology. Previously, the school system could only communicate with bus drivers via personal cell phones, which provided uneven coverage and were cumbersome to use

“The first one [proposed LMR system] we looked at was roughly $1 million for our entire fleet, and that doesn’t count the cost for the infrastructure—that was just the cost for the units,” Hardesty said, noting that other solutions quoted similar figures. “And the timeframe we were told was that we would be looking at a year or two out—at least—before we would have anything.”

With BusPatrol, Carroll County Public Schools approved the agreement on June 10, and 90% of the buses were outfitted with new equipment when schools opened earlier this month—a period of slightly more than four months, Hardesty said.

Installed equipment includes Sonim XP5 devices mounted with a speaker and a push-to-talk microphone to support voice communications, as well as location-based services from partner Zonar to support fleet-management applications. The BusPatrol tech package includes cloud-based cameras—one external camera on the side of the bus and several internal cameras inside the bus that are connected to the cloud, so real-time monitoring could be possible in the case of an emergency event.

“Our two biggest needs from safety and management standpoint were live GPS and communication,” Hardesty said. “So, this all came together rather nicely with the BusPatrol product. Because before, we were looking at these things independently, and there was no revenue source—other than our budget—to pay for it.

“The phones themselves were no cost, and the monthly charges were no cost. So, we’re not paying anything for this. Now, it’s a five-year agreement. It’s my hope that this is win-win agreement for both BusPatrol and us, so we can continue to extend that contract.”

Crucial to arrangement is the BusPatrol external stop-arm camera, which is deployed on the side of bus and captures video of vehicles violating the law by passing a stopped school bus as students are getting on or off—a violation that happens more often than many outsiders might expect, according to Hardesty. In Carroll County, the fine for such a violation—known as a “flyby” by many in the industry—is $250, he said.

“In Maryland, there’s one Wednesday every April where—statewide—we ask our bus drivers to record flybys that occur that particular day on their bus route,” Hardesty said. “Over a nine-year period of our bus drivers doing this for that one day, the average was 112 violations.

“Keep in mind that we go to school for 180 days. So, if you multiply, 112 times 180 days times $250, that’s a sizeable amount of money … That’s the revenue picture, from BusPatrol’s standpoint, and it’s obviously sufficient enough to fund this additional technology that we’re getting.”

BusPatrol CEO Jean Souliere said that the potential to generate more than $5 million in revenue through a jurisdiction like Carroll County during a single year is what makes the BusPatrol business model economically viable without burdening the school system with any upfront financial burden.

“We come in and take on the financial risk, and then we get paid exclusively out of a percentage of the proceeds that we create  through our program,” Souliere said during an interview with IWCE’s Urgent Communications. “That way, we’re able to encourage adoption at an accelerated pace.”

At the heart of the business model is the fact that “flyby” violations are fairly common, despite the significant dangers they present to students, according to Souliere.

Souliere said that BusPatrol’s technology is autonomous, requiring no interaction from the school-bus driver. Using object-recognition technology, license-plate recognition and artificial intelligence, the external camera captures video of the vehicle and uploads the evidence to the cloud. Individual frames of video are captured, so they can be shared with the vehicle owner via an online portal.

Broadband connectivity is key to helping the BusPatrol solution work as efficiently as possible, Souliere said.

“We’re certified on AT&T, Verizon and FirstNet, but FirstNet is definitely our preferred platform—it has its own bandwidth, it’s its own network, and we’re the only private enforcement company allowed on it,” Souliere said. “We really think it’s an important feature of our platform.

“We’re Internet of Things, but we’re moving large quantities of video data. By the way, all of this connectivity is also included free of charge to school districts. They don’t have to pay for a thing—our program covers it all.”

Although BusPatrol gathers the evidence, the decision whether to issue a fine for a violation is made solely by a local law-enforcement agency, Souliere said. Once the decision to prosecute is made, BusPatrol tries to make processing of the fine as simple as possible for both the agency and the accused violator, he said.

“Once that ticket is issued, BusPatrol takes over,” Souliere said. “We then print the ticket and mail the ticket to the offender. We send a web link, and the [alleged offender] can go online and view the evidence used against them to lay the charge.

“Right there online, they can decide whether to pay for the ticket immediately—which 95% of people do—or contest it. Less than 1% contest it. The other 4% are people who may take 60 or 90 days to pay their ticket.”

“At all times, all invoices from BusPatrol are actually paid from revenues that have already been collected, therefore producing a zero-risk, zero-upfront-cost and—overall—a zero-cost solution to cities and counties,” Souliere said.

“In a worst-case scenario, there won’t be enough tickets for the county or anyone else to participate, but they get the technology. What we see most of the time is that the county gets both the technology on the buses and a robust revenue stream to continuously invest in safety.”

Souliere acknowledged that BusPatrol typically will realize greater revenues from this model when striking deals with jurisdictions in populous urban and suburban areas. However, BusPatrol hopes to work with all school districts, including those in rural locations.

“Philosophically, we’ve made the decision as a company to say, ‘Hey, our job is child safety—that’s the priority,’” Souliere said. “We know that the urban markets are going to generate most of our corporate profit, but we’re not going to not equip the more rural areas with our technology, because that would be irresponsible of us.

“We feel that the access we get on urban markets actually imposes a certain responsibility on us, as a company, to make sure that we make the technology accessible to everyone.”

And the tragedies involved in rural violations often are among the worst, Souliere said.

“If you look at the data—and this is kind of scary—even though 80% of the violations come from 20% of the buses, the most terrible consequences occur on rural routes, where there aren’t a lot of violations, but the speed of cars is much faster, therefore making the survivability of those incidents almost zero,” Souliere said.

“What we say is, ‘How can we possibly call ourselves a safety company, if we’re not making sure that those families get the same level of protection as those in the cities and suburbs?’ Zip code should not determine the level of safety that a child enjoys. That’s just the bottom line.”

Although BusPatrol has started with solutions that are designed to work on school buses, the company is in the process of adapting this technology to resolve similar issues—for instance, addressing violations associated with vehicle failing to observe laws associated with officer safety at traffic stops or worker safety in construction zones, Souliere said.

“We also have the ability to bring our AI technology to the physical schools, so that we can use the technology to minimize the impact of mass-casualty events, providing situational awareness to police officers should the very, very terrible and unfortunate case of a school shooter should arise, “ Souliere said. “We are looking to develop tech that gets into the physical school itself.

“The other piece that we’re currently developing and deploying is transit technologies, to be able to manage public-transit services from a security and surveillance perspective.”