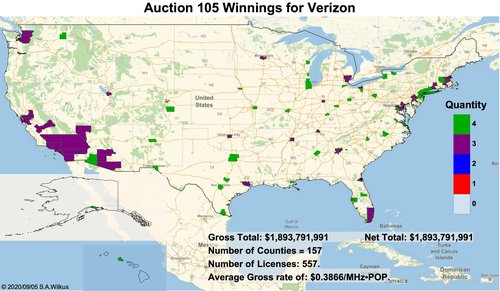 Verizon was the biggest spender during the FCC’s recent 3.5GHz CBRS spectrum auction, doling out a total of almost $1.9 billion for 557 licenses in markets across the country.

As Light Reading reported more than a year ago, Verizon has been deploying CBRS network equipment in anticipation of using the band.

The operator sees the CBRS band – both the licensed and unlicensed portions – as a way to add capacity to its existing 4G network.

However, a new analysis by Tutela, a network-monitoring company recently acquired by Comlinkdata, shows that Verizon’s CBRS spectrum purchases don’t necessarily line up with its most urgent 4G networking needs.

Specifically, as highlighted by Tutela, the operator did not buy CBRS licenses in the markets where its network is the most congested, where its most data-hungry customers live, or where it counts the most potential users.

As a result, the analysts at Tutela conclude that Verizon’s CBRS spectrum purchases were likely driven in part by other factors including bidding competition during the CBRS auction and Verizon’s likely plans to purchase extensive C-band spectrum later this year.