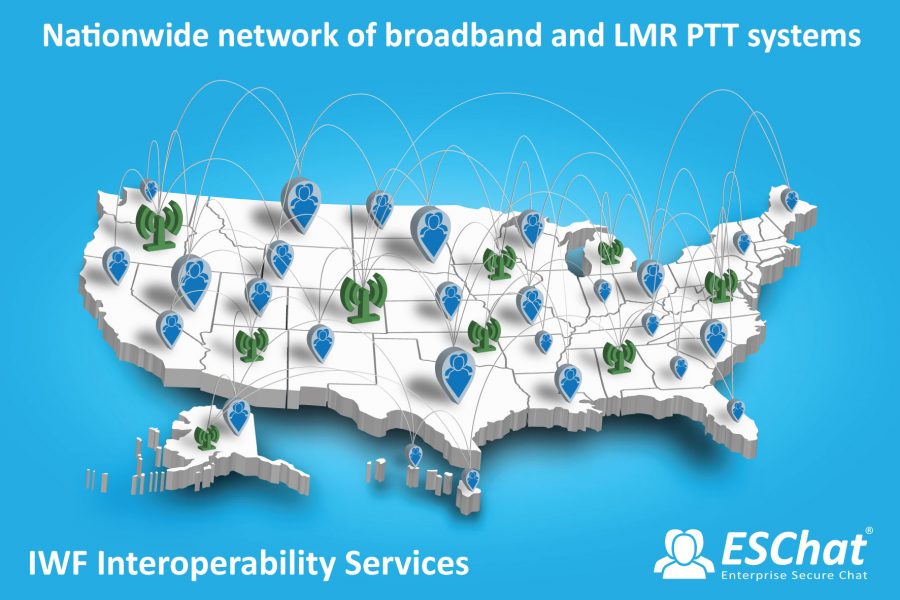 ESChat this week announced that the company has migrated public-safety customers of its push-to-talk-over-cellular (PoC) application to the Amazon AWS GovCloud platform in a move that is designed to improve security and enable greater interoperability with customers’ land-mobile-radio (LMR) systems.

“It’s been a long time coming, and it’s a big step for us,” ESChat CEO Josh Lober said during an interview with IWCE’s Urgent Communications. “For public safety, it served two purposes. One was to uplift them into a more secure environment. Two, it facilitates the interoperability services.

“It is exciting … It seems pretty techie, but what it enables from a customer perspective is very big. And then, when we springboard into the Gen 2 product [the ESChat software upgrade slated for release next month], that is even a much bigger deal.”

Lober noted that the three-week-long migration of ESChat public-safety users to the AWS GovCloud environment was completed last week—the conclusion of a process that included a year of planning and three months of testing earlier this year—and the company has tried to make the transition as seamless as possible to customers.

“A user going into their administrative portal has to go to a different portal, a different URL—it’s small stuff,” Lober said. “From an end user’s point of view, it was completely transparent.

“In terms of price, we grandfathered everybody in. Everybody got uplifted to GovCloud, and there was no price change for them.”

By having all ESChat public-safety customers—military, federal, state, local and even some commercial entities in the sector—use the AWS GovCloud platform, ESChat can more simply enable interoperable communications between agencies using ESChat, according to Lober.

“We’ve always had GovCloud available to us,” he said. “So, if somebody came to us and said, ‘We want your service, but it has to be on GovCloud,’ that’s always been an option.

“What hasn’t been there is, if they came back and said, ‘Can we interoperate with this other agency who is an ESChat customer?’ the answer was ‘Maybe’ because it only worked if [the interoperating agency also] was in GovCloud. If they were on our commercial environment, which was the bigger, the answer was ‘No.’”

With all public-safety customers using AWS GovCloud, the ESChat Interworking Functions (IWF) can be leveraged to enable interoperable communications between ESChat customers, as well as between ESChat users and traditional LMR systems, if authorized, Lober said.

Although ESChat is using the IWF moniker that the 3GPP standard body uses to describe the interoperability feature within the mission-critical-push-to-talk (MCPTT) standard, Lober said the ESChat IWF is different.

“It’s not compliant with the standard, because we’re not MCPTT,” Lober said. “But it serves the same function, and it’s compliant with many of the interfaces, like ISSI, AIS and ROIP. It enables things in the same way, but it doesn’t do them as defined in the spec [3GPP specification].”

With its IWF offering, ESChat provides a cost-effective method for public-safety agencies to let their PoC users interoperate with users of any LMR system, Lober said. Of course, each agency is responsible for signing a licensing agreement with its LMR vendor—something that is becoming an increasingly common aspect of negotiations, he said.

“This type of interoperability is going to evolve over the years,” Lober said. “We’re getting a lot of requests—not only from current customers, but from people who are planning to become customers in the future who are getting ready to get bids on new systems that they anticipate are going to be Motorola. They’re calling and asking specifically what they need to purchase from Motorola when they buy their system upfront to connect to us.

“Because they’ve heard the horror stories, and they don’t want to circle back to their county commissioners and say, ‘Hey, we need another [price figure] to buy an ISSI license, because we didn’t know.’ They want to purchase it up front.”

ESChat decided to migrate its public-safety customers to the AWS GovCloud environment after Amazon took steps to bolster the redundancies within its systems in recent years, as well as support for all of the features included in the Amazon commercial cloud offering, Lober said.

“2012 happens to be the year that Amazon created GovCloud, but it didn’t have all of the features that the commercial [offering] had, and there was only one GovCloud data center in the country,” Lober said. “It really took a few years for Amazon to build out the GovCloud environment to where it could do everything we needed it to do.

“In the meantime, we had military customers that needed to be on GovCloud, but they couldn’t get all of the same features. Now that Amazon has built their stuff out, we were able to do our thing, as well.”