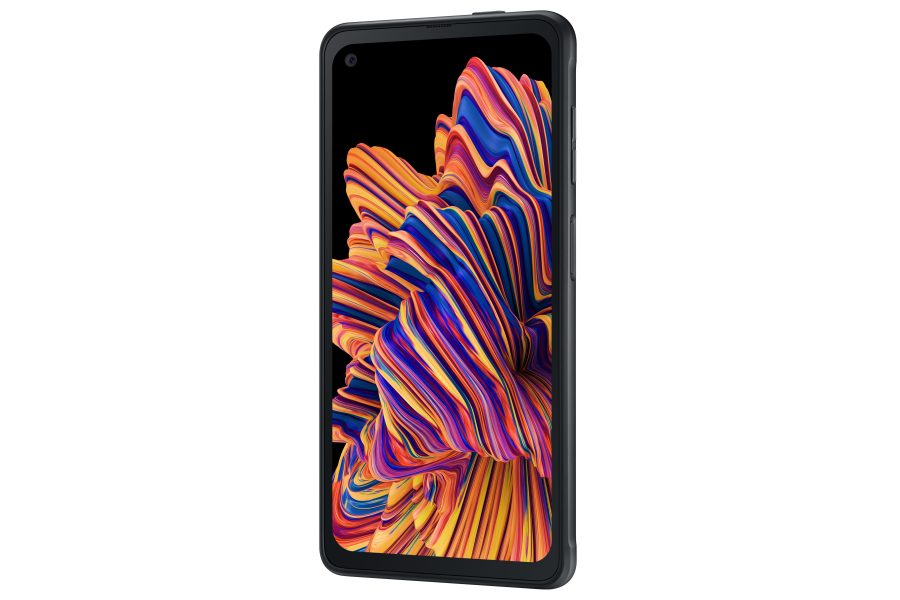 Samsung’s Galaxy XCover Pro has similar ruggedness characteristics to the Galaxy XCover Field Pro, which was announced as FirstNet Ready in March. Both smartphones meet MIL-STD-810G specifications and have an IP68 rating for being dustproof and water-resistant, according to information Samsung provided in response to inquiries from IWCE’s Urgent Communications.

However, there are notable differences between the two rugged smartphone models, such as the price—with a retail price of $499.99, the XCover Pro costs less than half as much as the XCover Field Pro, which retails for $1,104.99.

“The XCover Pro is designed for a broader audience of frontline and field workers, including first responders,” according to a Samsung statement provided to IWCE’s Urgent Communications. “Its push-to-talk buttons can be programmed for a variety of tasks, including allowing team members to communicate instantly with Walkie Talkie feature in Microsoft Teams.

“Outside of push-to-talk functionality and FirstNet readiness, it also features mPOS (mobile point of sale) and NFC (near field communication) readiness with enhanced security and reliability features from TEEgris. It also was designed to integrate with software and hardware solutions from partners such as OtterBox and KOAMTAC, ProGlove and Scandit, for a variety of other business needs.”

With two programmable buttons that can be used to activate a variety of applications, the XCover Pro is able to support AT&T Enhanced Push-to-Talk (EPTT) and FirstNet Push-to-Talk services. However, the XCover Pro has not been proven yet to meet the stringent MCPTT performance criteria while operating on FirstNet, unlike the XCover Field Pro.

“The XCover Pro is designed to work with AT&T’s FirstNet EPTT solution,” according to a Samsung statement. “Testing for MCPTT is still underway.”

Designed for users seeking a larger screen while working on the FirstNet network, the Tab Active Pro has the same ruggedness criteria as the XCover Field Pro, boasting an IP68 rating and meeting MIL-STD-810G specifications, according to Samsung.

“The Samsung Galaxy Tab Active Pro is purpose-built for workers in industries such as manufacturing, transportation and public safety, enabling easy access to key applications to take on real-world challenges—both on-site and off,” according to a Samsung statement provided to IWCE’s Urgent Communications. “It puts high-durability front and center.

“It also features Samsung DeX, which creates a more immersive PC-like experience, enabling businesses to be more productive outside the office and in tougher environments. It can be used in two ways: Dual Mode for large monitor connectivity, or Standalone Mode, which uses a keyboard to turn the tablet into a PC workstation. This helps ensure seamless workflow whether you’re in the field or on the factory floor.”

Taher Behbehani, Samsung Electronic America’s senior vice president and general manager of the Mobile B2B Division, said that providing a variety of device choices to workers in the field is a priority for the company.

“Today’s environment brings unique challenges for frontline workers and we want to equip them with the most comprehensive solutions powered by our partner ecosystem and the AT&T nationwide network,” Behbehani said in a prepared statement. “Samsung is dedicated to providing frontline workers with secure, reliable technology through continued innovation and partnerships across our rugged portfolio.”

Robert Boyanovsky, AT&T’s vice president of product marketing, echoed this sentiment while noting that user can trust that FirstNet Ready devices will work as needed after undergoing considerable testing.

“FirstNet devices and modules go through extensive review, so first responders can be confident that Samsung’s Galaxy XCover Pro and Tab Active Pro meet our highest standards for reliability, security and performance,” Boyanovsky said in a prepared statement. “The more tools public safety has access to on their network, the more we can help them achieve their mission.”