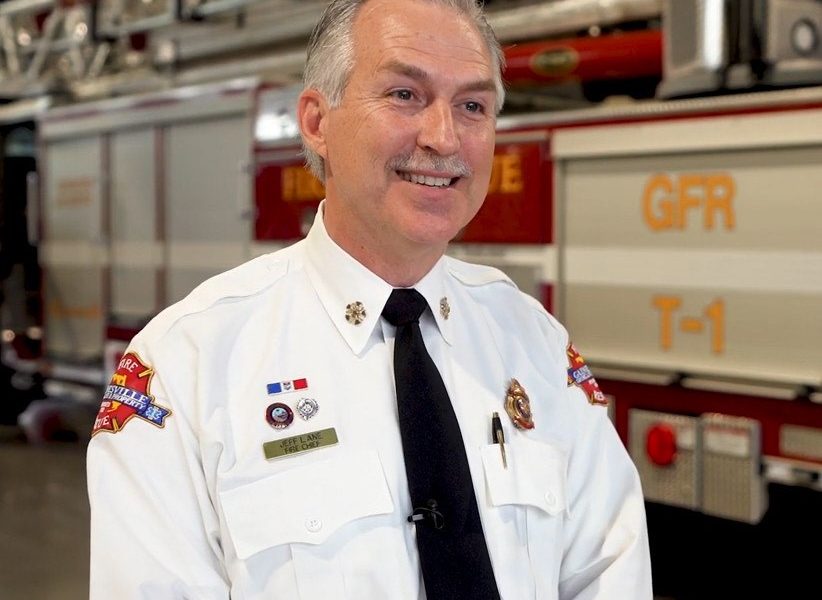 Reliable broadband service from FirstNet already is impacting operations for public-safety agencies and other departments in Gainesville, Fla., but the technological evolution is still in the early stages, according to Jeff Lane, this year’s recipient of the FirstNet Authority’s Harlin McEwen Award.

Lane, who recently retired as Gainesville’s fire chief after a 38-year career, said he always has tried to be practical in his approach to new technologies, including FirstNet, the nationwide public-safety broadband network (NPSBN) being built by AT&T.

“I’ve always been an operations guy, … so I’ve always looked at technology not as a total nerd but in terms of what can it do, how can it help us in the field,” Lane said during an interview with IWCE’s Urgent Communications. “Police, firefighters and other in public safety are very practical people, and they are not overwhelmed with theory and all of that whiz-bang stuff.

“Really, what they want to know is, ‘How will this help me do my job?’ And that’s a really difficult task, to take this technology and transform it into something that’s seamless and usable for the lay provider of public safety.”

At the moment, many in public safety are still hesitant about embracing the broadband technologies enabled by the FirstNet system—and moving beyond this stage is about more than supporting robust data rates over wireless connections, according to Lane.

“It’s amazing, but still you come back to that application process,” he said. “They have the powerful tool in their hand, but do they find it usable? Are they leveraging it to improve their responses? Is there application in the real world to make this technology valuable?

“I think that’s where we are. We have a lot of capability, but I don’t know that we have pierced the veil of tradition, of doing things the old-fashioned way, or getting the common user to embrace the technology in a way that they come up with ideas about how to improve it.”

Lane acknowledges that he once was a FirstNet skeptic, noting that Gainesville—home of the University of Florida—had “no complaints” with its previous wireless carrier and that initial conversations with AT&T sales personnel were not convincing.

“No disrespect to the great people on the AT&T sales side, but when we first got the sales pitch, we were left cold,” Lane said. “I’m not a technocrat, but I would ask a certain level of questions and was not getting the right answers. We were ready to say, ‘OK, we’re staying where we are. Have a nice day.’”

But this sentiment changed after Lane spoke with FirstNet Authority officials, who helped foster new conversations with AT&T’s network staff about local buildout plans and potential data-sharing opportunities across multiple jurisdictions in the area.

“It really cast FirstNet not as a commercial, per-line proposition but truly as an Internet for public safety at all levels,” Lane said. “That was the game-changer for us. Had the FirstNet Authority not been there, this just would have been a battle of commercial [carriers]—who can have the best commercial [system].”

When asked whether Gainesville would have changed broadband wireless providers without the work of FirstNet Authority staff, Lane said, “Probably not.”

“We did a real, independent field testing of the providers—we got devices and we did side-by-side comparisons of what we had [at the time] and several of the products,” Lane said. “We tested it, ran data through them, and measured it. We put that together with map overlays and coverage evaluations of our own.

“At the end of the study, there was no comparison, and we almost immediately switched—almost wholesale—all of our devices to FirstNet.”

This evaluation included that included testing of network availability and data throughput to devices during heavy-usage scenarios, such as college football games and a Garth Brooks concert, according to Lane.

“No two carriers are the same, in terms of coverage, so there are tradeoffs there,” he said. “What convinced us was the throughput—how much data we could push through that pipeline on a consistent basis through the heavier-populated areas of our city—and how resilient it was. We really banged it hard, and it came through for us.

“The uplifting and the backend controls … those kind of features are really what sold us on the notion that we didn’t need to migrate and that we needed to do this thing pretty quickly.”

Lane said he believes all communities should be evaluating their broadband wireless options to determine whether new offerings like FirstNet can better meet their existing and future needs.

“We weren’t a dissatisfied user of the other provider, … but we hadn’t challenged it, either,” Lane said. “It was really a lack of testing and being critical of our existing systems. I think that there’s a lesson there, that we do not need to be complacent and that we need to make sure that the status quo is not just accepted, but it’s something that you make prove itself over a reasonable timeframe.”

This is especially true today, as FirstNet is making LTE available broadly—both in terms of coverage and pricing—to entities of all sizes, according to Lane.

“It really doesn’t matter how great it is, if you can’t make it work in financial terms, it’s not going to work,” Lane said. “FirstNet’s made it possible so that everyone, from coast to coast, at least will have access to the technology. What you do with it and how far you take it is the next step, but [FirstNet provides] the ability to access the same level of technology as a metropolitan, high-population, highly funded department. Your smallest—even a volunteer—department can have the same access.

“I think that’s the fundamental watershed difference between taking the FirstNet approach from a national level—with governmental oversight and then leveraging public airwaves in the commercial side with AT&T … It was certainly accessible to us in Gainesville at the same—or less—cost as we were already spending [with the previous commercial wireless provider].”

“We sent them with both devices and were blown away by how quickly FirstNet’s infrastructure—true to form, as promised—rolled into the area,” Lane said. “Other vendors were doing great work also, but I can tell you that [FirstNet] was head and shoulders above.

“Our crews … could get the most reliable service in the worst possible scenario, where you had massive infrastructure damage throughout that whole area. That was one of the first eye-opening experiences for us.”

From a day-to-day perspective, having access to FirstNet is helping Gainesville make cost-effective decisions about the use of public-safety tools like body-worn cameras and other applications that utilize cloud-based technology, according to Lane.

“Of course, everybody wants to look at the cloud,” he said. “But how do you get to the cloud and back from the cloud with some confidence, in terms of both security/encryption and with speed?

“Body-worn camera, for us, started off as a budget problem … [because] the data maintenance was extremely high. How do you download the data, how do you keep it, and those kind of things? Having the FirstNet platform now, it really made some of those decisions a little easier.”

FirstNet broadband also is proving to be beneficial to the EMS and medical communities, a fact that has been highlighted during the COVID-19 pandemic, Lane said. And development in this arena could develop rapidly during the next several years, he said.

“The biggest thing that we’ve seen is the ability to transmit medical information from the field into the emergency room,” Lane said. “I think that’s going to be an evolving technology. I expect to see that EKG—that heart rhythm—will very soon will flow from the 911 caller to the ambulance paramedic or to the fire truck before they get to the home, whereas now we’re sending it from the home to the emergency room

“We will actually see the rhythm from our vehicles before we get there and have a pre-understanding what the patient’s condition is [upon arrival]. It’s just around the corner.”

But the FirstNet impact on Gainesville is not limited to traditional public-safety agencies, Lane said. FirstNet is being used by personnel throughout the city, including the public-works department. Being on the same platform is expected to help bolster interoperable communications within the city when coordinated responses are needed, but FirstNet also has the potential to be leveraged in Gainesville’s smart-cities initiatives.

One example of this is Gainesville’s traffic-management system, which is designed to improve traffic flow, particularly by timing traffic lights in a manner that allow emergency vehicles to travel to an incident scene as quickly as possible, Lane said.

“We spent all of these millions of dollars, but it didn’t work—our fire trucks would be through the intersection before the signal got there and changed the light,” Lane said. “It was because we didn’t have the throughput speeds on the cellular network from [the computers on emergency vehicles]. They were just too slow, even as we were approaching 4G in some areas.”

This changed dramatically when the city altered the network design and began using FirstNet to connect to the traffic-management system, according to Lane.

“Now, we’re actually seeing it work for the first time,” he said.

Gainesville is in the process of utilizing a U.S. Department of Transportation (DOT) grant to expand the traffic-management system to about 15 intersections around the University of Florida, Lane said. In the future, this technology could expand beyond its emergency-response purpose to help overall traffic efficiency, particularly as the number of connected vehicles increases that can share data with the system.

“That’s one of the things I think you’ll see embedded—traffic management, smart cars, smart interfaces,” according to Lane, who described Tesla cars as “basically a 5,000-pount mobile phone that you can ride,” given their vehicles’ ability to process information.

“One of the key components of smart cities is how to utilize the existing infrastructure for roads without having to build more road—make them more efficient. Certainly, it will improve our response times, but it’s a bigger problem than that.”