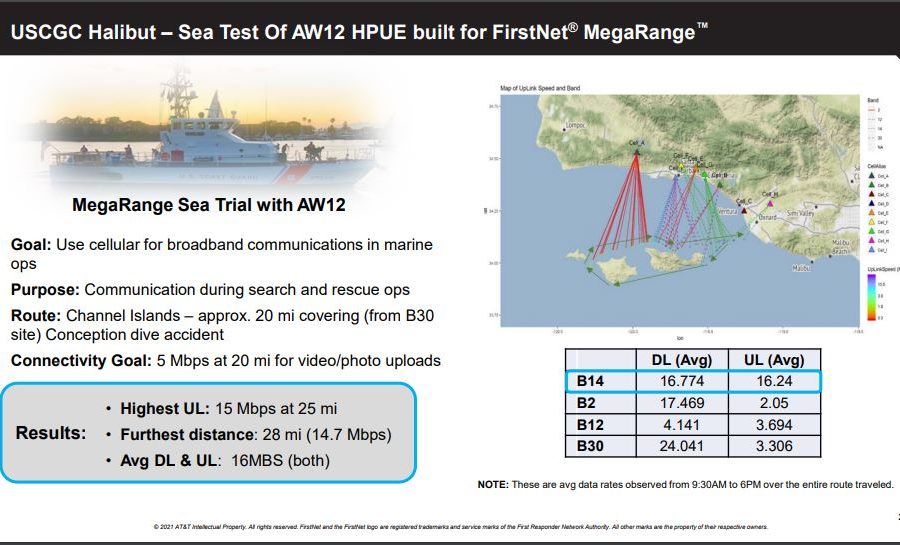 FirstNet MegaRange—the new FirstNet offering that leverages high-power-user-equipment (HPUE) technology to extend the effective range of a cell site—delivered throughput speeds that could support multiple video streams during maritime tests conducted as far as 28 miles from the California coast, according to an AT&T official.

Andy Salvador, lead product marketing manager for the FirstNet program at AT&T, reiterated the fact that FirstNet MegaRange uses higher Band 14 device power—up to 1.25 watts, as opposed to 0.20 watts—to increase throughput and effective range by 62% to 100% in terrestrial settings. However, FirstNet MegaRange “achieved some incredible results” when tested several months ago by the U.S. Coast Guard in Pacific Ocean waters near the site of the Conception boat fire in September 2019 that resulted in more than 30 deaths.

“In the aftermath, it was determined by the U.S. Coast Guard that they would have benefited from having better connectivity, particularly for search-and-rescue operations,” Salvador said yesterday during a webinar presented by MissionCritical Communications. “It was determined that test should be conducted to evaluate various technologies, and the goal would be to enable a 5 mbps uplink at 20 miles [from the shore]—a 5 mbps uplink at 20 miles would enable them to upload real-time videos and photos, making search and rescue that much more effective.

“MegaRange was trialed with the AW12 modem, and we successfully delivered more than three times the goal. We achieved 16 mbps for both uplink [UL] and downlink [DL] throughout the trial. The farthest distance was 28 miles, at 14.7 mbps.”

Assured Wireless CEO John Goocher provided some details about how the maritime test with the U.S. Coast Guard was conducted, noting that no special engineering or planning was done in advance. The test results were measured from a vessel that temporarily was equipped with a car antenna, and the HPUE capability was provided with an Assured Wireless AW12 modem that was plugged into a laptop that was onboard, he said.

“It wasn’t like it was a directional antenna,” Goocher said during an interview with IWCE’s Urgent Communications. “It was a regular antenna that you could buy off the street for a few hundred bucks. It wasn’t special.”

Goocher said that the antenna was not deployed on the boat mast—“it was basically situated at crew height.”

In addition, no special network engineering was done in preparation for the maritime test of the high-power user equipment, according to Goocher.

“They didn’t do any modifications to the network side whatsoever,” he said. “I mean, they enabled the HPUE feature and they did all the stuff that is done to every single cell site in the FirstNet world, but nothing special—they didn’t point any antennas at the ocean arbitrarily. It was, ‘Let’s go see what it looks like right now, without doing modifications.’”

Goocher acknowledged that the results from the maritime tests may have benefited from the fact that the tests were conducted during a relatively calm day, when the waves were only 1-3 feet in height. Larger waves could disrupt the RF signal propagation and negatively impact broadband performance and coverage, he said.

On the other hand, there are several potential techniques that could be employed to improve maritime performance that were not attempted during the tests with the U.S. Coast Guard, Goocher said.

“We took everything as it sat,” Goocher said. “Our unit was off the shelf—no special antennas, no weird stuff. [The maritime tests were conducted with] what people can buy today and the existing network that was designed for road coverage along the Pacific Coast Highway, and we said, ‘Let’s go try it.’”

“If we actually spent some time trying to do better, I can only imagine [what the performance improvements would be],” he said. “If we purpose-built something, I’m sure it would be better.”

Many industry sources have noted that RF signals typically propagate better over salt water than fresh water, but Goocher said that no test results are available yet to help quantify the coverage difference in the two environments.