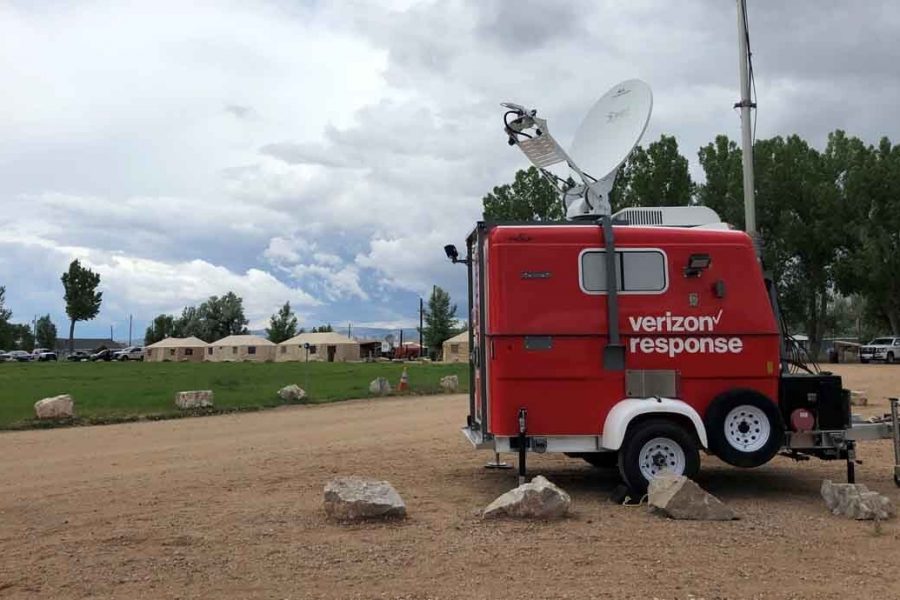 Members of the Verizon Response Team (VRT) are using a variety of solutions to deliver broadband communications to public-safety agencies battling wildfires throughout the U.S.—at no additional cost—as part of the carrier’s Verizon Frontline offering, according to a Verizon official.

Cory Davis, director of Verizon Response and public-safety operations, said the VRT has been “super busy,” responding to a total of 74 named wildfires already in what is proving to be a very active wildfire season.

“We’ve had 88 deployments across the United States, from California, Oregon, Arizona, Montana, all the way to Minnesota,” Davis said during an interview with IWCE’s Urgent Communications. “There’s a huge fire—the Delta Lake fire—that’s burning right now along the Canadian border. We sent a team up there to help support the operations center, working really closely with the COMLs up there.”

Supporting first responders fighting blazes in the western part of the U.S. has become expected—particularly in recent years—but Davis described this year’s wildfire landscape as “unprecedented,” based on some of the new locations needing communications support.

“This is the first time my East team went to a large forest fire in that part of the country,” Davis said. “Places like Canada and Minnesota just generally don’t have large forest fires that often like the West does. But as things are getting warmer and the climate is changing, we’re seeing that fires are popping up everywhere—I had my team out in North Carolina at a fire about a month ago.

“So, it’s not just secluded now in the West. We’re seeing it more in other parts of the country, where [wildfires historically] weren’t that big of a threat—they were manageable.”

Firefighters often work to control and extinguish wildfires in locations where terrestrial wireless coverage is not available, so many of the VRT solutions utilize geosynchronous (GEO) satellite communications with “public-safety-grade priority” to provide backhaul, according to Davis.

“We can get an average of 30 mbps downlink and 10 mbps uplink,” he said. “Obviously, there will be bursts with more [data throughput] being available.

“The biggest thing is dealing with latency when you use satellite backhaul—anywhere between 600 and 800 milliseconds—but first responders can do a lot with 30 mbps.”

Davis said that Verizon is closely monitoring developments in the low-earth-orbit (LEO) satellite arena and will consider leveraging that technology in the future. This assessment process include testing of LEO-based offerings from companies like Lynk and AST SpaceMobile, which have announced satellite LTE services that will connect directly to a smartphone, as opposed to requiring the user to deploy a satellite dish or a specialized device, he said.

In addition to traditional deployable communications solutions—from those on vehicles to offerings housed in Pelican cases that can be carried by hand to a location—VRTs are using satellite pico cells on trailers (SPOTs) to deliver broadband in a focused area to help support first-responder communications.

“Essentially, we can provide not only a 4G LTE bubble but also a Wi-Fi bubble for—and it depends on the environment—about 6,000 to 7,000 square feet. So, it’s really good for base camps,” Davis said.

“Since it is enclosed, we also have the capability to have it be like a mini operational command-center—you can fit two or three good-sized adults in there. So, you can turn it into not only an asset that deploys coverage and capacity, but it can also work as kind of a makeshift operations center for a very, very small group.”

Verizon cannot use the high-power user equipment (HPUE) that is only permitted on the 700 MHz Band 14 spectrum licensed for FirstNet, but VRTs do have some solutions that can be deployed when extra range is needed, Davis said.

“We do have tools to deploy out in the field when we are in those fringe areas to increase the power and the pull from the macro network,” he said. “They’re basically antennas that we can deploy that pull in the signal in these fringe area. So, instead [of experiencing throughputs based on] being 7-10 miles from the network, now it’s like you’re a mile from it. So it significantly increases the upload and download bandwidth capabilities.”

Verizon also has provided several hundred devices that have been loaned to first responders already this year.

“We provide a lot of loaner devices, and all of these services are free of charge,” Davis said. “We don’t charge first responders—public-safety agencies or federal agencies … these are loan devices for as long as the first responders need them to achieve the mission in a crisis response.

“We provide phones. These phones have the capability—if the first responders need it—to have mission-critical PTT capabilities. We also have priority-and-preemption QoS on all of our devices. We also provide Jetpacks [MiFi units] and tablets. We provider off-network laptops for some of these Red Cross shelters, Cradlepoint routers, and panoramic antennas … to significantly augment the network and provide a better experience.”

And free VRT communications support is not just limited to agencies that subscribe to Verizon, according to Davis.

“My team supports all first responders—it doesn’t matter if you are a Verizon, AT&T or T-Mobile customer, we’re going to come help you out, if you need it,” Davis said. “We’re able to deploy Wi-Fi and, and anybody can jump into a Wi-Fi [network]. They can make Wi-Fi calls, if they’re on another carrier, so they can make phone calls through that. It’s very carrier-agnostic, as well—we have capabilities to provide multiple cellular and Wi-Fi signals.

“It could be anybody; they could be AT&T FirstNet [subscribers] … When there’s a time of need or a crisis and there’s a first responder that needs mission-critical communications, we’re going to help them out.”

Verizon also has its own drone team with certified pilot that can be used to gather video in an incident location, so responders can better understand some of the challenges they may face prior to entering a situation, Davis said. Along with the recent improvements in satellite communications, the rapid evolution of drone and robotics capabilities have had some of the greatest impacts on the support VRTs can provide to response efforts, he said.

“Probably in the last five years, satellite backhaul has been a lot more practical,” Davis said. “From a drone perspective, over the last three or four years, that technology has definitely gotten a lot better.

“We’re able to use thermal sensing on drones now for search-and-rescue missions, where it has the thermal capability to see whether there’s a person or a wild animal out there. Some of that capability just wasn’t around 10 years ago, like it is today.”

While the VRT focus today is on wildfire response effort, Davis said Verizon officials recognize that communications support also will be needed as public safety agencies try to mitigate the damage caused by hurricanes and tropical storms that typically hit the U.S. during the next few months.

“We’ll be doing double duty—fighting fires in the West and fighting storms in the South and in the East—this is our gametime,” Davis said.