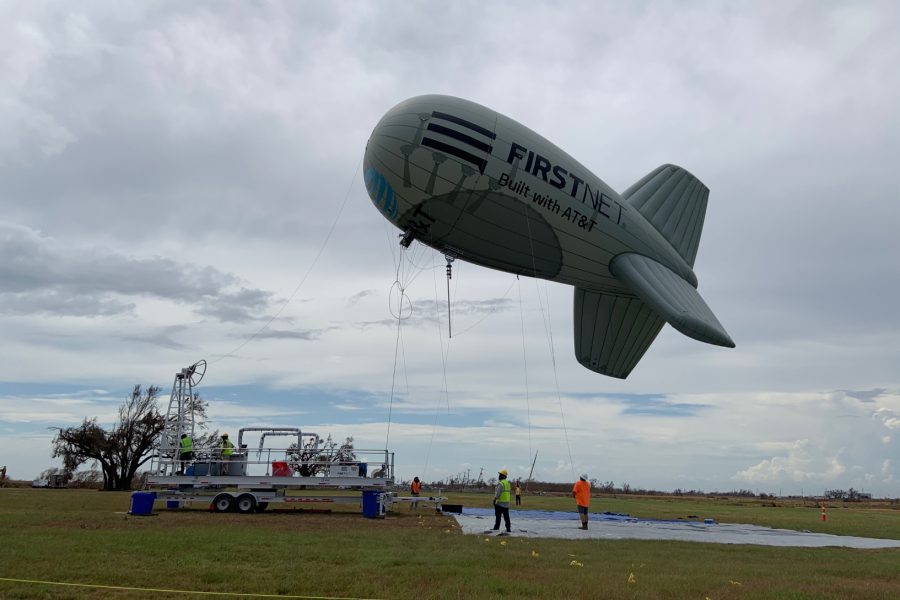 FirstNet One, recently completed its first real deployment providing public-safety communications, as the tethered the aerostat that acts as an LTE tower in the sky supported the response effort in Louisiana during the aftermath of Hurricane Laura, according to AT&T officials.

“This was our first field deployment in a real incident,” Tom Steele, AT&T’s director of strategy and operation for the FirstNet program, said during an interview with IWCE’s Urgent Communications.

“We were very anxious to get that opportunity, because no matter how much you try to simulate a real emergency, you can’t completely duplicate what’s going on when you respond to a disaster incident like this, when you’re two miles deep into a swamp and trying to avoid alligators, snakes and turtles on the road as you’re trying to get there.”

Unveiled late last year and tested in Tuskegee, Ala., the FirstNet One blimp carries LTE base-station equipment as high as 1,500 feet above ground and is designed to provide LTE coverage to more than 100 square miles for weeks at a time, as the tether connects to an ongoing source of power. An AT&T mobile communications vehicle on the ground provides power and a backhaul connection—typically via satellite, although fiber could be used, if available, Steele said.

AT&T had a waiver from the FCC that would allow FirstNet One to fly as high as 1,500 feet, but most of the post-Hurricane Laura mission was flown at 750 feet, with a high level of 1,000 feet, according to Steele.

“It’s five to six times the footprint that we get out of some of our other assets,” Steele said. “The primary use case [for FirstNet One] would be where we have an area—typically following a hurricane—where we have a number of macro-cell sites out, and they’re expected to be out for two weeks or more “That’s a rule of thumb that we use.

“A lot of its purpose is to give us a larger coverage footprint. Rather than deploying multiple SatCOLTs [satellite cells on light trucks] into an area, we can use those assets a little bit more surgically, out where they need to go, and cover the big swaths where the cell sites are down with the aerostat.”

In addition to providing coverage and freeing the LTE assets, using the FirstNet One aerostat to deliver LTE connectivity also can reduce the burden on personnel in the area, according to Steele.

“Having the larger footprint [from FirstNet One] meant that we didn’t have four or five other SatCOLTs down there covering that,” he said. “So, it probably gave them a little bit of relief, so they could get back to the staging area or back to a hotel room.”

Steele said the FirstNet One blimp was deployed east of Cameron Parish, about halfway to Creole near the Gulf of Mexico. FirstNet One was removed from the area as the terrestrial LTE system came back online earlier this month, he said.

“Some of the macros to the east have come back online, and we have a COW in Cameron Parish,” he said. “Between those two assets, we were covering that expanse of the coast with FirstNet One. But once those cell sites came back up and we were able to get a COW into Cameron Parish, they were able to take over for the footprint that the aerostat was covering.”

From a performance perspective, users leveraging FirstNet One experience similar data throughputs as those who connect via a SatCOLT, Steele said.

“It’s very similar to a SatCOLT,” Steele said. “It’s flying an almost identical radio package as a SatCOLT—it’s  a 40-watt macro radio, the same thing we use on many of our cell sites. The limiting factor would be the satellite backhaul.”

FirstNet One is not designed to be part of the first wave of deployable solutions transported to an area. Instead, it is better used after cell-site outages are identified and a longer-term LTE solution is needed for a given area.

When the FirstNet One aerostat is inflated and in position, it can be flown and operational in about 30 minutes—about the same amount of time it takes to bring the aerostat down to the ground, Steele said. However, inflating the blimp requires the wind conditions to be less than 15 miles per hour—something that AT&T personnel had to wait two days to happen in Louisiana.

Once inflated—on its trailer or in the air—FirstNet One is able to withstand much winds as strong as 70 miles per hour, Steele said. Although the aerostat can remain operational at wind speeds up to 50 miles per hour if fiber backhaul is available, the LTE connectivity does not work at such high wind speeds if satellite backhaul is necessary.

“Even though we might leave the aerostat up, we would discontinue service at around 35 miles per hour,” Steele said. “That’s the same as a SatCOLT, because that comes down to a trailer with a big satellite dish on it. If you think about that in a windstorm, it’s basically a big kite. You don’t want that dish deployed over about 30 or 35 miles per hour. What we would do is fold down the dish, discontinue the service for a  half-hour or whatever it took to let the front pass, and re-establish service afterward.

“The aerostat itself can operate [in winds] up to 50 miles per hour, so the limiting factor in that would be the satellite trailer.”

AT&T officials recognized the need for a solution like FirstNet One in 2018, when FirstNet SatCOLTs were deployed for about six month in Florida to assist the recovery effort in the wake of Hurricane Michael hitting the Florida panhandle.

“Following events like [Hurricanes] Maria and Michael, where they said, ‘We need something that will cover a bigger footprint to give us flexibility to use some of our other assets’—that’s really where the idea of the aerostat came about,” Steele said. “AT&T was willing to invest the money, the time and the brainpower to go out and make that a reality. That’s why we have the blimp.”

Like other FirstNet deployables, FirstNet One is available to FirstNet subscribers at no additional cost. This deployable program—coordinated by AT&T’s Response Operations Group (ROG)—is among the most-cited benefits of FirstNet, and the FirstNet Authority board specified that part of its first investment would be to enhance the FirstNet deployable portfolio, although the specific solutions have not been announced yet.

“They’re looking at other SatCOLTs, new form factors,” Steele said. “We’re working on some mobile command vans that the Response Operations Group will be able to take out to some of these deployments, so we can provide on-site communications to a base camp or, frankly, to our team that’s deployed down there.”

In Louisiana, not all deployables in use were associated with vehicles, according to Steele.

“We had routers down there. We had cellular boosters with us. We had RDKs [Rapid Deployment Kits housed in pelican cases] down there,” he said. “And a number of those were certainly deployed in sheriff’s stations and EOCs, particularly where you needed to bring a weak macro signal into an in-building-type situation. We had a bunch of those deployed, particularly in the first two or three days.”