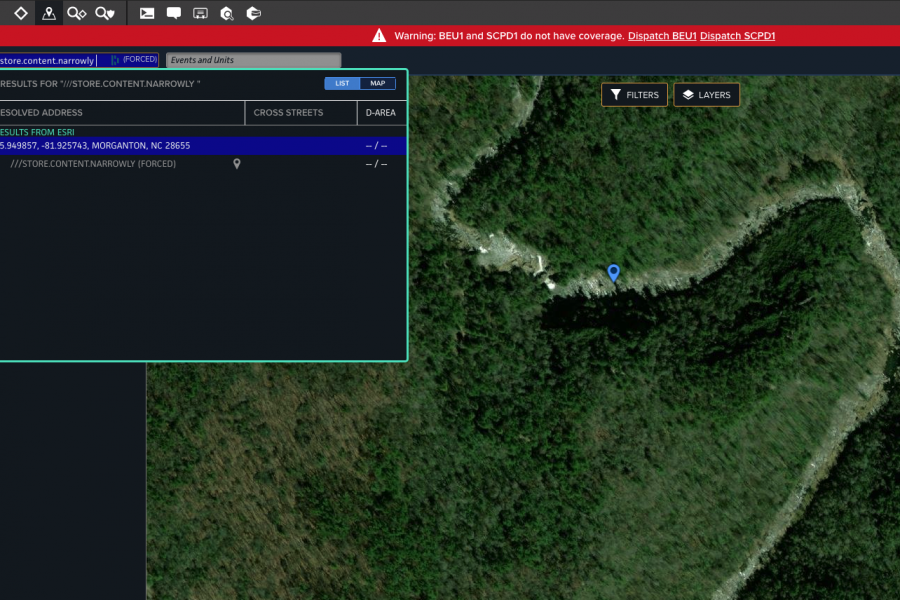 Agencies using Mark43’s cloud-based computer-aided-dispatch (CAD) system will be able to leverage location information from what3words, a technology that uses three-word groupings to describe every 10-foot-by-10-foot square area on Earth.

Matt Polega, Mark43’s co-founder and head of a communications and public policy, said that XY coordinates from satellite GPS technology is accurate in most outdoor settings, but communicating them to dispatchers can be challenging.

“When you’re in the field, it’s hard to describe where you are,” Polega said during an interview with IWCE’s Urgent Communications. “It’s hard to say, ‘I’m at latitude/longitude and mention a million numbers, decimals and all of these complicated things while speaking over a radio. There’s a lack of clarity, and it’s challenging. With what3words, they’ve broken the entire world down into a huge grid of squares—3 meters by 3 meters—and each of those squares is described by three words.

“Now, instead of us being able to say, “Oh gosh, we have to describe things with a latitude and longitude or something complicated like,” or “this seems to be the landmark that I’m by, and I’m 50 feet away from that,” you can instead say, “My what3words definition is that I’m at ‘freshen.overlook.clow,’ and that describes a very specific point in the world that never moves, never changes, and the dispatcher can know exactly where the first responder is. It’s a novel and unique way to address very finite and very specific points, no matter where you are.”

Adding a field that contains the what3words information to the Mark43 CAD was relatively straightforward from a technological process, but the impact on response efforts could be significant, according to Polega.

“It’s just another layer on the Mark43 system and allows us to go from what3words to a latitude and longitude and vice versa,” he said. “This is less of a technological space saver or something like that; it’s more about giving the first responder out in the field just another way to communicate a little more  capably and a little more simply with the first responder [telecommunicator] that’s keeping an eye on them.

“We just want to get as complete and as whole of a solution as we can provide to our customers. If they don’t have to wrestle with 20-digit-long latitudes and longitudes that are prone to lots of error and can instead speak to the location in three simple words, it was really a no-brainer for us to build a partnership.”

“We’re really excited to work with Mark43, especially because they’ve got lots of partners in the U.S,” Cashion said during an interview with IWCE’s Urgent Communications. “We also have some common partners in Australia already, because what3words is also used in Australia—it’s built into the triple-zero app nationwide there.

“So, we’re excited about making it possible for telecommunicators to use it directly and for all of the people who live in those areas to be able to benefit from it and for the response teams.”

Cashion said the three-word description of specific locations was the brainchild of company founder and CEO Chris Sheldrick. Sheldrick worked in the music industry and often struggled with getting personnel and equipment to a precise location or entrance, particularly within large venues that may have a single street address but hundreds or thousands of relevant points inside of it.

GPS location could resolve the outdoor-location problem, but reciting lengthy XY coordinates was unnatural and inevitably led to errors.

“He did some math and figured out that it would be 57 trillion 3-meter-by-3-meter squares to grid the entire world, and then you could assign words to those squares,” Cashion said during an interview with IWCE’s Urgent Communications. “That’s how it came about. It was kind of out of necessity, realizing that the world is not completely addressed. There are so many places that we go every day that don’t have an address at all, or the address isn’t specific enough.

“If you’re going to the stadium to meet friends for a football game this weekend, where do I meet you? Where do I pick up my tickets? Where do I park? Well, there’s a stadium address, but there’s not an address for each of those different locations. If there’s a festival, how do you get to that location where the equipment needs to be delivered?”

Fees are attached to such commercial uses of what3words, which allows the company to let public-safety agencies use the location technology at no cost, Cashion said.

“We give it free to public safety; we’re not charging Mark43, either—it’s completely free for them to use to use our API and build that into their system, Cashion said.

“Our commercial business model is to charge companies for using what3words to make deliveries or build it into cars and mobility platforms, so people use it to navigate to places. So, you can kind of equate it to people making or saving money by using what3words. When it comes to saving lives and NGOs, we offer our technology for free to make sure that everyone everywhere has an address.”

Cashion said that what3words picks its three-word description for each grid square from a library of 40,000 words in English, and the company consciously has tried to reduce the possibility of confusion in selecting the grid names.

“There are lots of similar-sounding combinations; what we’ve tried to do is shuffle those,” Cashion said. “So, if you’re in Sunnyvale, Calif., and you say, ‘I want to go to update.park.shark’ but you misspell some of the words, the autosuggest we’ve built in can kick in and say, ‘updated.park.shark’ is in Utah, and ‘update.park.shark’ is—and I’m just making this up—in another state or is in Australia, for example.

“Then, you’ve got a couple of pieces of information. The words don’t have any meaning for the place, but we’ve tried to take things into account, like the fact that people associate words like ‘run’ and ‘running.’ We’ve tried to remove homophones, and we tried to shuffle similar combinations, so that you’d be able to look and say, ‘Well, this one [combination] is 10 miles away, and this one is 10,000 miles away, so I better check my spelling and make sure that I got those correct three words.’”

Users can download the free what3words application to their devices to get a three-word description of their current location that can be communicated verbally or via text, Cashion said. In addition, three-word descriptions are being added to signposts on hiking trails, so people can access the information easily to describe their locations.

Because what3words is based on latitude-longitude coordinates that typically come from satellite GPS, the system currently works much better for outdoors than indoors, where satellite signals typically do not have a direct line of sight and may provide inaccurate location information. However, as various indoor-location technologies improve, they also would be able to leverage the what3words approach, according to Cashion.

“Every 10-foot square in the world is named, so the names already exist,” she said. “As other companies perfect indoor navigation, indoor mapping, and GPS signals are always thrown off.

“Right now, I wouldn’t recommend using it inside of a large high rise or something like that right now—my GPS signal could be bouncing around. So, as other technologies are doing more indoor mapping, what3words can absolutely be used there, too—they already exist for those locations … But outdoors is definitely [more accurate]—getting that line of sight with GPS is important.”

Polega said he believe the what3words technology can help public safety make the elusive “dispatchable location” a reality, at least for outdoor emergencies.

“Personally, I think it gets us there [to dispatchable location],” Polega said. “I think it allows any first responder, a telecommunicator or a person in an emergency situation out in the field to describe exactly where they are and to prevent the communication from getting muddled, complicated or being prone to any errors.

“I really think this does get us there and it’s an exciting chapter for public safety and agencies being able to respond to the communities that they serve.”

Of course, having the exact location of an emergency does not mean that there is a direct route for first responders to access it. Cashion said what3words is working to develop information that helps direct first responders about the best way to reach a what3words location.

Locations provided by what3words currently are correlated to XY coordinates. Cashion said the notion of including information that would correlate to Z-axis vertical location is “on the back of our radar,” but she believes vertical-location use cases and solutions need to mature before the company actively integrates them into its technologies.

Polega said he believes adding what3words functionality will make the Mark43 cloud-based CAD solution more useful to the first-responder community and the people they serve.

“I just see it as a really elegant solution to a really complicated, painful problem,” Polega said. “It’s a problem that creates a lot of pain and stress for a bunch of already really stressed-out first responders and telecommunicators.

“We are always super enthusiastic whenever somebody comes up with a super-novel, super-elegant idea to solve a really painful problem, and we think this is going to pass on some incredible value to everyone in public safety.”