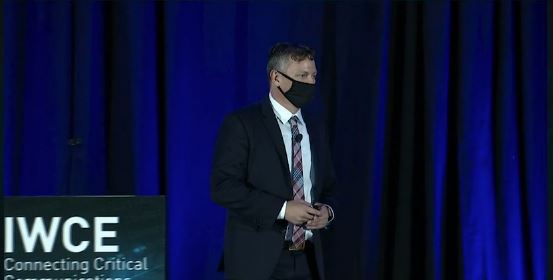 AT&T has completed more than 95% of its contracted buildout of the FirstNet nationwide public-safety broadband network (NPSBN) system on 700 MHz Band 14 spectrum, according to an AT&T executive.

Scott Agnew, AT&T’s assistant vice president for FirstNet products, provided the update during his keynote address last Thursday during the IWCE 2021 event in Las Vegas. Named by the FirstNet Authority in March 2017 as the contract partner to build the NPSBN, AT&T was required to build the LTE network on the Band 14 airwaves licensed to the FirstNet Authority, but the carrier giant opted to expand its offering.

AT&T is “over 95% complete with our Band 14 deployment,” Agnew said during his keynote, specifically addressing the public-safety community. “It’s dedicated to public safety; this is your dedicated spectrum.

“However, our strategy is an all-band strategy. So, not only do we deploy on your spectrum and continue to expand that network daily, but we also give you access to all of AT&T’s spectrum, [where] you have priority and preemption.”

For AT&T, completing 95% of the contracted Band 14 buildout has contractual significance, as it means that the carrier has met the second-to-last coverage threshold included in the agreement with the FirstNet Authority at least six months ahead of schedule. Meeting such buildout milestones is a key component to AT&T potentially earning about $1 billion under the contract.

With the FirstNet Authority issuing the initial network-buildout task order to AT&T in March 2018, the carrier has until March 2023 to complete the Band 14 deployment, as well as develop other service capabilities within the system. AT&T officials have expressed confidence that the company will meet the March 2023 deadline, but they have acknowledged that the remaining buildout includes some of the most challenging locations for deploying cell sites and the requisite backhaul.

This Band 14 buildout is the highest-profile aspect of the FirstNet contract, but the agreement with AT&T extends into 2042, with the FirstNet Authority having the ability to reinvest an estimated $15 billion in the public-safety broadband system during the life of the 25-year deal.

In addition to providing broadband connectivity to public safety, FirstNet has driven innovation in numerous areas, from the development of 3GPP mission-critical products and certified public-safety applications to the realization of longtime visions surrounding Z-axis location, high-power user equipment (HPUE) and a versatile portfolio of deployable options, Agnew said.

FirstNet subscribers can expect more innovative offerings in the future, he said.

“And this innovation has been quite successful, if you think [about the fact] that the FirstNet core—the dedicated [LTE] core exclusive to public safety—was deployed in March of 2018. It is roughly little over three years old … and a big part of that has been [time impaired by] COVID.”

Despite these trying circumstances, Agnew noted public safety’s adoption of FirstNet, reiterating that the NPSBN supports more than 2.5 million connections for more than 17,000 agencies. These figures are an indication that public-safety users are embracing FirstNet as “their network,” he said.