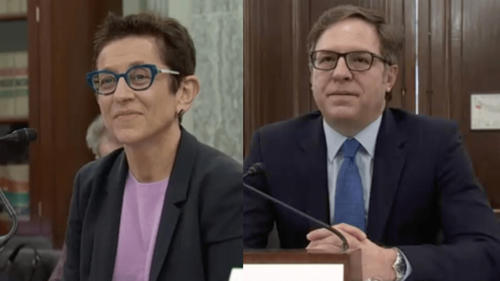 The US Senate returned to work for the new year on Monday with a long list of things to do, including debating the future of voting rights, attempting to pass President Biden’s “Build Back Better” bill and commemorating a year since the US Capitol was stormed by a mob of Trump devotees. Adding to that list, Biden made a humble request this week for senators to please confirm his many lapsed federal and judicial and agency nominees from last year.

Included in those is Gigi Sohn, Biden’s pick for Federal Communications Commission (FCC) commissioner. Sohn’s confirmation hearing before the Senate Commerce Committee was held on December 1, but she had not been voted out of committee by year’s end.

Another nominee stuck in the Senate is Alan Davidson, Biden’s pick to head the National Telecommunications and Information Association (NTIA). While Davidson was successfully voted out of committee last month, his nomination did not make it to the floor for a full vote by the time the Senate adjourned its 2021 legislative session. Politico reports that this was due in part to Sen. Rick Scott (R-FL) imposing “a broad blockade of Commerce Department nominees over unrelated supply chain grievances.”

While Davidson is expected to receive the votes needed for confirmation, the delay is not ideal for Biden’s broadband agenda. The $65 billion broadband bill signed last year assigns most funding to the NTIA (through the Commerce Department) to dole out to each state through a $42.45 billion Broadband Equity, Access, and Deployment program (BEAD).

According to Blair Levin, chief of staff to former FCC Chairman Reed Hundt under President Clinton and executive director of the National Broadband Plan under President Obama, not having a head of NTIA is a “significant problem” because it’s holding up the ability to hire necessary staff. That’s a concern he previously expressed in late 2021 when Biden had yet to name his nominees for federal leadership roles.