By aggregating critical site components in a small housing that is less expensive to operate and easier to deploy and service, Alcatel-Lucent dramatically has altered the base-station landscape. 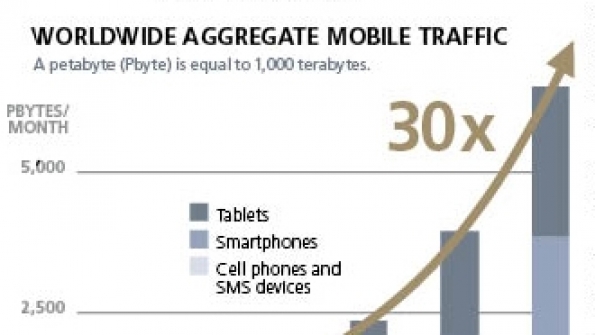 Like death and taxes, there has been a sense of inevitability about the components needed in the design of a modern wide-area wireless network site. To ensure that an antenna located on a tower or building is effective, it needs to be connected to appropriate amplifiers and baseband processing, which typically have been housed in a separate hut or closet near ground level that has to be air-conditioned or heated, based on weather conditions.

But these longstanding site truisms could be changing during the next few years, as technological innovations such as Alcatel-Lucent’s recently announced lightRadio portfolio promise to streamline site architecture dramatically by consolidating key network components both onsite and offsite in less intrusive form factors.

“This is quite a breakthrough in the industry,” said Jean-Pierre Lartigue, vice president of marketing and strategy for Alcatel-Lucent’s wireless activities. “In some sense, what I have described is kind of the demise of the base station as we know it. We break the base station apart.”

While the aesthetics and smaller form factor of the lightRadio solution are nice, the real selling point is that the new architecture is designed to provide network operators with unprecedented flexibility and significant cost savings, both from a capital and operational perspective.

For cellular operators struggling to deploy LTE sites to meet the overwhelming data-capacity demands driven by the popularity of smartphones, laptops and tablets (see graphic below), the notion of a more efficient approach to delivering packets to users is welcome news, with carrier giants Verizon Wireless, China Mobile and Orange already expressing interest publicly in lightRadio. That’s because adding more antennas and base stations — which is the traditional cellular model — simply is not sustainable over the long term, said Tom Gruba, Alcatel-Lucent’s senior director of product marketing. 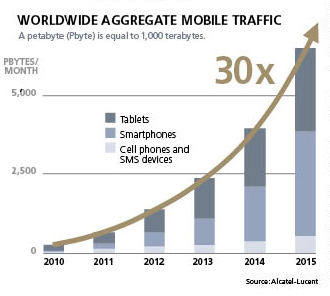 “You can’t keep adding bits to serve the need without adding more revenue,” Gruba said. “It’s more than just an eyesore; it’s a business-economics problem, as well. [The lightRadio] way of doing it doubles the capacity and reduces the cost per bit in half. Now, [carriers have] got something they can do.”