Brazil serves as a reminder that LMR-LTE convergence issues not limited to U.S.

Brazilian Army General Antonino dos Santos Guerra (pictured above on left) says comparing the functionality of LMR to LTE is "like listening to a game on radio versus watching it on TV." 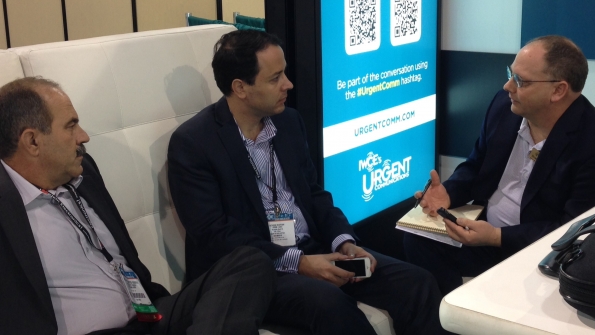 Brazil serves as a reminder that LMR-LTE convergence issues not limited to U.S.

It’s an exciting time for mission-critical communications, one in which communications leaders seek the best way to utilize P25 LMR systems and LTE cellular networks in a manner that utilizes the best characteristics of both systems to promote interoperability today while preparing for long-term integration and convergence.

For at least one country that recently dedicated 700 MHz spectrum for public-safety LTE, the ability to leverage technological functionality effectively for its first responders is particularly important, because the glare of a global spotlight is being shined on its efforts.

And we’re not talking about the United States.

Certainly, there is every indication that the world is watching closely to see how FirstNet implements the public-safety LTE initiative in the U.S., especially from a business-model standpoint. But the first integration of LTE and LMR to be tested under significant operational stress is in Brazil, which will host soccer’s World Cup this summer and summer Olympic Games in 2016.

To prepare for these massive sporting events—occurring on the heels of the 2011 Military World Games and soccer’s 2013 Confederations Cup—Brazil has invested massive amounts of capital into all forms of supporting infrastructure, including mission-critical communications.

General Antonino dos Santos Guerra, chief of the Brazilian Army information technology (IT) and communication division, said the army has taken a two-pronged approach to interoperability in the country that leverages both P25 and LTE.

“Based on the geography of Brazil and the terrain, P25 is a more suitable technology,” Santos Guerra (speaking through interpreter Rodrigo Franciscani of Motorola Solutions) said during an interview with IWCE’s Urgent Communications conducted on the IWCE 2014 show floor. “Also, considering that the legacy equipment and the footprint, P25 offered a more efficient way of deploying the technology. The legacy equipment that the army had was mostly Motorola, so that relationship also helped bring P25 as the technology of choice.”

In addition, the Brazilian army began an LTE pilot in 2012 that proved very helpful in coordinating response efforts associated with protests conducted during last year’s Confederations Cup, according to Santos Guerra.

“During the Confederations Cup, there were some street protests at the same time, and the army was one of the few organizations that had live video streams from those areas,” he said. “Recording the images was used both ways, to see the effectiveness of the troops and for data-sharing purpose with police, particularly if they needed to use it in court.”

Santos Guerra said the advantages of LTE have become evident quickly, and the Brazilian pilot has been a “showcase” system that led to the country’s regulatory body allocating a 5×5 MHz swath of 700 MHz spectrum to support the deployment of a nationwide LTE network for first responders.

“The analogy is like listening to a game on radio [with only LMR communications] versus watching it on TV [with LTE].”