Families of tower workers that are killed or injured while on the job will be eligible for financial assistance that is designed to help the families pay for short-term needs, thanks to the launch of the charitable Tower Industry Family Support Charitable Foundation. 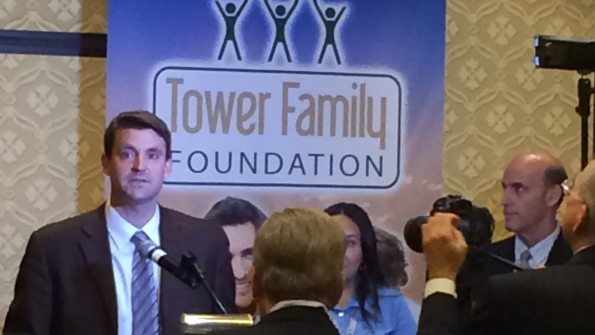 Families of tower workers that are killed or injured while on the job will be eligible for financial assistance that is designed to help the families pay for short-term needs, thanks to the charitable Tower Industry Family Support Charitable Foundation that was launched yesterday at CTIA’s “Super Mobility Week” in Las Vegas.

Jim Tracy, president of the Tower Industry Family Support Charitable Foundation and CEO of Legacy Communications, said the establishment of the foundation is an example of “tower people caring for their own,” particularly in the times of greatest need—after a tower worker has been killed or injured.

“Our goal is that, within seven days, we provide bridge funds and a handwritten note from our board to them, letting them know that they’re not alone,” Tracy said during an interview with IWCE’s Urgent Communications. “And this [money] is for things that the rest of us may take for granted—things like house-payment money, grocery money and things like that.

“This is a charitable endeavor. If there’s somebody in need, as an industry, we have a moral responsibility to stand up and handle it.”

These bridge funds—a one-time payment of $10,000 to the family of a tower worker that is killed or seriously disabled, and a payment of $5,000 for an injury that is not permanently disabling—are particularly important to families as they wait for insurance and legal processes to occur, Tracy said.

“The beauty of what we’re trying to do is that we’re cognizant of the fact that you may have a family that needs money quickly,” he said. “That’s the whole impetus, to turn this money around quickly.

“There’s going to be federal, state or insurance aid through the employer, but they are not able to move as quickly as we are. What we’re going to do is turn these funds around quickly, so there’s not a dramatic need for grocery money, a house payment or whatever.”

Carriers and tower owners might be willing to provide such funding on their own, but legal implications associated with doing so is a deterrent, according to Tracy. The Tower Industry Family Support Charitable Foundation does not have those concerns, so it is in a position to fill this void, he said.

“If someone at our firm would be injured and we did something for their family, the legal profession would tell us that is indicative of guilt and that we would be making some sort of admission,” Tracy said.

“We don’t believe that’s true at the foundation. We think that we have a moral responsibility that goes above and beyond legal implications. So, what we’re doing is taking care of our own in a little different fashion.”

Tower climbing has been considered one of the more dangerous jobs in the United States for some time. With carriers rapidly deploying LTE networks, 2013 was one of the worst years, in terms of the number of fatalities. When such incidents happen, it is important that the families of tower workers not have the added burden of financial issues for everyday needs, Tracy said.

“When something happens at elevation, it’s usually pretty dramatic,” he said. “There are so many things on [the family’s] plate that the last thing you need to worry about is how in the world you’re going to get enough money to go to the grocery store, because all of a sudden your breadwinner is somehow not able to provide.

“That’s what we’re about. This is a food/clothing/shelter situation, where we’re stepping in to make sure that the people in our industry have some way to take care of their own.”

For any tower-related death or injury occurring on or after Sept. 1, 2014, a family member or a representative can apply for foundation funds by completing a relatively simple application, which will be reviewed as quickly as possible, according to Tracy.

“We’ve set up a very nimble committee of seven people, who are going to be able to evaluate all of these applications on a quick basis,” Tracy said. “Generally speaking, I think what you’re going to find is that we would rather be early than perfect. So, when somebody’s hurt, we’re going to step in as best we can with all of the resources that we have to make sure that tower workers are taken care of.”

Legal questions of fault will not be considered or evaluated by the Tower Family Foundation committee, Tracy said.

“One thing that differentiates this is the word ‘family’ in the name,” he said. “If we stop to try and assess fault, we wouldn’t be taking very good care of families, and they didn’t do anything wrong—they were at home, at school or at work [when the incident occurred]. Now they’re at the hospital, and they need someone to love on them. That’s what we’re going to do.”