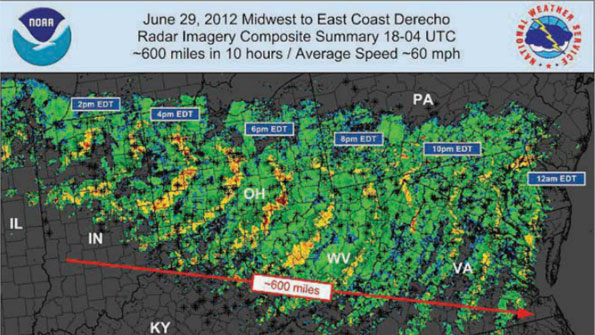 (Ed.: This article originally appeared in print as “Winds of Change.”)

Starting as a thunderstorm cell in Iowa on the morning of June 29, this summer’s derecho — straight-line winds often reaching hurricane force — evolved into one of the most destructive weather events in the United States, particularly as it traversed an 800-mile path from Illinois to the mid-Atlantic states, including Virginia.

With winds reaching speeds of 92 miles per hour, the devastation was severe. In addition to the 22 fatalities and numerous injuries attributed to the storm, about 3 million people lost electric power, and the physical damage was so great that several governors declared states of emergency, with President Barack Obama declaring some locales federal disaster areas.

Adding to the frustration inherent with such significant losses was the fact that many people could not call 911 to notify public-safety agencies that they were in dire need of help. Overall, millions of people were unable to communicate with a 911 call-taker — for days, in some cases — because of outages in carrier networks and/or public-safety answering points (PSAPs), according to the FCC.

Clearly, the absence of the commercial power grid across large areas within the path of the derecho hampered the ability for communications equipment to work, but that situation was not an excuse that federal officials were willing to accept.

“Here is the bottom line: We should not — and do not — find it acceptable for 911 to be available reliably under normal circumstances where a range of emergencies take place, but not available when a natural disaster occurs,” said David Turetsky, chief of the FCC’s public safety and homeland security bureau, during a session at the Association of Public-Safety Communications Officials (APCO) show in August.

“That’s simply unacceptable. Our networks need to be just as reliable or resilient when there is an enhanced need for emergency assistance as when there is not.”

These stern words were supported by actions by regulators and policymakers. On Capitol Hill, the House Subcommittee on Emergency Preparedness, Response and Communications examined the derecho’s impact on the 911 system during a September hearing. Meanwhile, the FCC conducted a proceeding and inquiry concerning the 911 outages associated with the derecho.

“The goal of this inquiry is simple — to use this information to make people safer,” Turetsky said during his testimony before Congress.

This goal has been applauded by public safety and telecommunications industry officials alike, but there are significant differences when the topic of the appropriate next steps is debated. While some believe that carriers should be subject to new regulations regarding the resiliency of their networks and their reporting responsibilities to public-safety agencies, many in the telecom sector contend that the FCC should establish best practices for carriers to follow in a cost-effective manner.