On the tower, safety needs to be the top priority

Climbing has become safer, but it remains one of America's most dangerous professions. 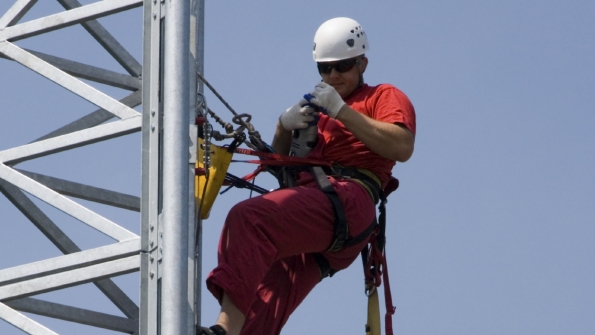 On the tower, safety needs to be the top priority

A version of this article appeared in the February 2013 print issue with the headline: One too many.

On June 26, 2012, 19-year-old Jeremy Jo Froemke fell 153 feet from the cellular tower upon which he was working and died as a result of his injuries. The death was particularly noteworthy because it was the only tower-climbing fatality recorded in 2012 — the lowest total since the National Association of Tower Erectors (NATE) started keeping track of such statistics.

"But it still was one too many," said NATE Executive Director Todd Schlekeway.

For the last several years, NATE has been working diligently to improve the safety of tower work, which is inherently one of America's most dangerous and nerve-wracking professions. Much of its emphasis has been on developing a culture within the industry in which safety is the top priority. To that end, the association has created a comprehensive equipment checklist to ensure that climbers not only have the gear they need, but also that they actually use it properly.

In addition, NATE developed criteria that can be used to vet contractors to ensure that they are qualified and are set up to work safely. Key questions that should be asked of any contractor include:

Two years ago, NATE announced its STAR (safety, training, accountability and reliability) Initiative, which is designed to get tower owners and operators — as well as those who work at tower sites — to adhere to established best practices.

The association also created a climber certification and training standard that identifies two types of climbers: authorized and competent. Authorized climbers generally fall into two categories — new hires or those who climb sporadically. To achieve competent climber status, an authorized climber has to undergo additional training and work under the supervision of a competent climber for a minimum of 6 weeks, though some tower construction and maintenance firms require a 12-week apprenticeship.

Also helping the cause are several American National Standards Institute (ANSI) standards that establish guidelines for fall protection and training. Tower companies are becoming increasingly aware of the standards and adhering to them, according to industry sources.

Add it all up, and it seems clear that significant progress has been made to make tower climbing safer. But Schlekeway readily acknowledges that there's still plenty of work to be done.