They can be pricey, so here's how to get the most bang for the buck. 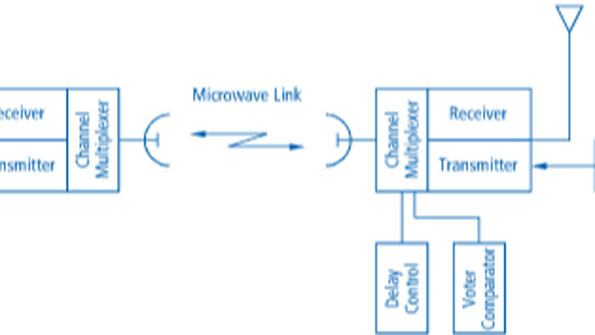 In the November 2008 issue of this magazine, we discussed simulcast networks and examined some common pitfalls of simulcast design. This month, we focus on some of the steps needed to optimize such networks.

Simulcast is an abbreviation for simultaneous broadcast and, in the context of land mobile radio (LMR), it means simultaneous transmission from two or more repeater sites on precisely the same radio frequency and with the same modulation.

Disadvantages include high cost and signal distortion in simulcast overlap regions. The high cost results from more complex timing and control hardware, as well as the simple fact that every site must be populated with one repeater for each frequency used in the network. In contrast, a multicast system incorporates a handoff algorithm to pick the site with the best signal, and the number of repeaters at each site is driven by traffic-engineering considerations to ensure a low blocking or queuing probability.

Because simulcast systems are pricey, the vendor may propose simulcast even when conditions don’t warrant it. The “better coverage” advantage often is oversold. True, seamless overlapping coverage is an advantage of simulcast, but multicast systems also have seamless overlapping coverage, if an effective handoff algorithm is used. The most compelling reason for choosing simulcast is not coverage improvement but to address a lack of frequencies. When frequencies are in short supply, simulcast is the right solution.

Elements of a Simulcast Network 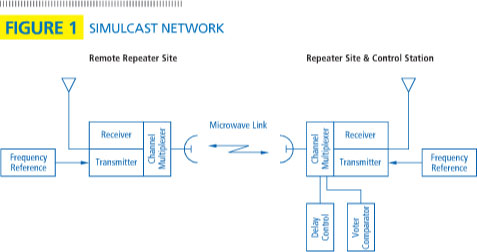 The simulcast multiplexer performs an important function that is not obvious from its name: it introduces the relative baseband (audio) delay between sites to control time delay interference (TDI). Control of baseband delay and receiver voting are functions of the control station, which is often collocated with one of the repeater sites. The interconnecting network usually provides T-1 throughput via landlines or microwave links.

Early simulcast systems employed transmitters with custom-cut-and-matched crystal oscillators to ensure that each transmitter was operating on precisely the same frequency. The modern approach is to use specialized GPS receivers to train the transmitter’s reference oscillator (usually 10 MHz).

The first parameter to be considered in the optimization process is the modulation used on the outbound path, where TDI can occur. We’ll assume that digital modulation is used on both the control channel and the traffic channels (e.g., Project 25, NXDN, DMR and TETRA). To minimize TDI, the modulation rate should be as low as possible, and the waveform should be tolerant of time-delay overlap (also known as intersymbol interference).

For example, a P25 Phase 1 system operates with C4FM modulation at a symbol rate of 4.8 ks/s and a bit rate of 9.6 kb/s (2 bits per symbol). The symbol period is 208 microseconds. The receiver only can tolerate delays equal to a fraction of this period, but the precise amount of delay it can tolerate depends on the amplitude of the interfering signal(s), the inherent tolerance of the waveform to delays, and the receiver implementation.

So, why is it called “linear” simulcast modulation? Unlike C4FM, CQPSK is not continuous phase; therefore, it exhibits sharp spectral regrowth when used with a nonlinear class C amplifier. As a result, less-efficient linear amplifiers are required in the repeater. In contrast, C4FM is used in the battery-operated portable radio, where efficiency is paramount.