Rebuilding homes and lives in the aftermath of Superstorm Sandy promised to be challenging, but reliable communications helped accelerate the process. 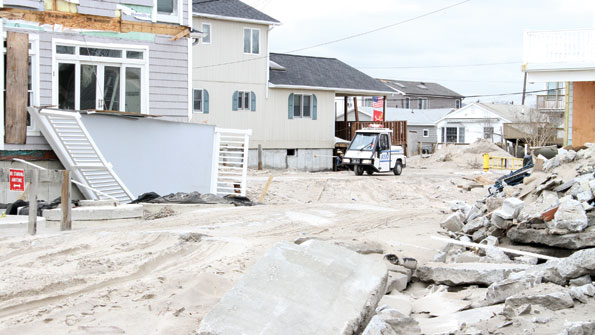 A version of this article appeared in the April 2013 print issue with the headline: Manna from the heavens.

Superstorm Sandy was not just a hurricane, it was a disaster. There is a difference. Hurricanes are events that you prepare for and clean up after. Sandy was an inflection point. While most people have closed the book on the Sandy story, down at the end of Breezy Point, N.Y., the cleanup is far from over — and "cleanup" doesn't even begin to describe it.

Cleanup assumes that something was dirtied or got out of order; for many places in this neighborhood, the houses are simply gone. With them went the infrastructure that we take for granted: the telephone poles and electricity lines, the hospitals and gas stations that are the backbone of modern civilization.

Today, in the communications capital of the world, there are people living without communications — a whole neighborhood subsisting outside of civilization. It's a tragedy.

Breezy Point sits at the end of a peninsula on the Atlantic Ocean, with one mile of water separating it from the rest of Queens. A small community of about 4,000 residents, it's a popular home for firefighters and other first responders.

When Superstorm Sandy struck, rising tides and a storm surge plunged the entire neighborhood under six feet of water. The ocean flowed over the peninsula and spilled into the bay, cutting off Breezy Point from the rest of the city.

After the seawater shorted out an electrical line, a fire broke out. In the gusting winds of the storm, the fire quickly spread — leaping from rooftop to rooftop — consuming block after block of the community. Firefighters rushed to the scene, but debris and floodwaters slowed their progress. Gripping water-cannons in chest-deep seawater, the firefighters did the best they could, but the winds and the flames were too great — 111 homes burned to the ground.

After the water receded, all that was left were charred timbers, flooded basements, fallen electrical lines, sand, sewage and debris strewn across washed-out streets — and an entire community displaced.

That's what I saw when I first visited, just a few days after the storm. An organizer from Habitat for Humanity in nearby Westchester County, I responded to the call of a friend who needed a power generator. When I saw what had happened, I brought more.

After we had set up 20 water pumps, I began coming every day. It started with bringing contractor bags for the cleanup — 500 in the first four days alone. After meeting with the fire chief and local residents, I knew I had to stay.

We quickly got to work. Clearing the streets was the top priority, because ambulances and dump trucks were getting stuck in the debris. But coordinating our efforts was almost impossible. With the power out and the terrestrial telephone lines and switching stations down, the only way to connect was with sporadic cell-phone signals.

Worse, there was no way for those in the community to call for help, and no Internet connection to manage logistics operations.

I reached out to a fellow volunteer, Tim Woods, who is a technical support manager for Cisco Systems. He knew exactly who to call: the Global VSAT Forum (GVF), a non-profit organization that serves as the voice of the satellite community. Since the 2010 earthquake in Haiti, the GVF maintains a disaster-preparedness registry with companies ready to spring into action at a moment's notice.

"We realized with Haiti that there was a need for companies to better leverage the resources that they have and build a stronger relationship with the response organization," said Steve Birnbaum, chair of GVF's humanitarian-assistance and disaster-response programs. "Every company provides a point of contact to get things done in a quick, efficient, coordinated manner. Cisco came to GVF with the Breezy Point request and, in a matter of hours, Hughes responded."

"When it's the right situation, the right thing to do, and we feel we can help and not be in the way, we're there," said Tony Bardo, assistant vice president of government solutions for Hughes. "And the GVF helps make that happen."

When the communications truck pulled up in front of our makeshift office at a gutted-out church, it was like the cavalry arriving. They brought an Internet-access solution powered by the EchoStar XVII satellite. Cisco's tactical operations team provided a switch for connecting our computers, a call manager for phones, and Wi-Fi for wireless access.

Using high-throughput technology with network speeds up to 15 Mb/s, we could now work to coordinate logistics around materials, volunteers and funding. The fire chief stopped by and couldn't believe the communications capability we had — and it wasn't a moment too soon.